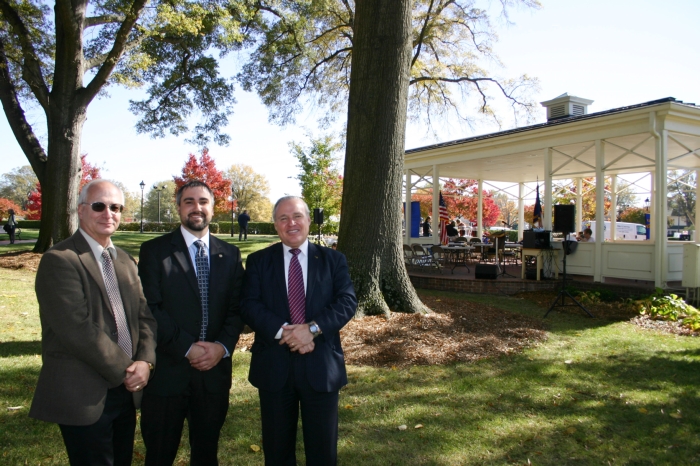 Dr. Steven Zeisel, Jeremy Tutt and Whit Whitley gather at Veterans Park on Tuesday before the Kannapolis Rotary meeting. Tutt, Rotary president, and Whitley, who spearheaded the project, presented Zeisel, director of the UNC Nutrition Research Institute, with a donation of $63,500 to help create student housing in Downtown Kannapolis. Susan Shinn, for the Salisbury Post.

The money will be used to create student housing at the North Carolina Research Campus in downtown Kannapolis. Dr. Steven H. Zeisel, the institute’s director, said he hoped the project would spark revitalization in the downtown district.

Rotarians gathered for their weekly meeting at Veterans Park, under blue skies and warm sunshine — a picture-perfect day. The meeting also paid tribute to local veterans.

“This is a unique event today,” Rotarian Whit Whitley noted. “The main focus is our veterans. We had planned to make this presentation and this is the earliest time we could do it.”

Whitley spearheaded four years worth of fundraising, which included the annual Nutrithon fitness event to raise money for the project.

“The hardest part was raising that last bit of money,” Whitley admitted.

He added, “Now we’re giving the money to UNC, and they will handle it from there.”

“One of the missions for this center is to create an economy for the future,” Zeisel said. “We are training future scientists who will be here. This housing will help us attract bright young minds for tomorrow. It helps attract faculty, too. Rotary is helping us get off the ground.”

He added of the local club, “They did a great job. It is a great start, and a statement that the business community cares about students.”

Zeisel said he envisioned second-floor housing being created downtown. The project will eventually total some $500,000, he said. “This will really help us and help the town.”

“It’s a huge day,” said Rotary President Jeremy Tutt. “Not only to culminate this project after four years, but to honor our veterans today as well. It’s a great day.”

Along with veterans who were special guests, Suzanne Dane and Carolyn Harris from the Nutrition Research Institute also attended the event. Upon receiving the oversized check from Whitley, Zeisel joked he hoped he could find an ATM that would accept it.

Actually, Whitley said, the money has already been sent to Chapel Hill. He said it was a relief to wrap up the fundraising.

Rotarians and guests who were veterans were recognized and asked to list their branch of service and length of service. They knew it down to the day. The speaker, Rotarian Jimmy Wilson, gave a brief history of Veterans Day, and talked about how proud he was to be a veteran. Other members of his family have also served, he said.

The meeting ended with Wilson singing “God Bless the USA” joined by Rotarians on the chorus. Wilson then invited Rotarians to spend a few minutes walking around the beautiful Veterans Park.