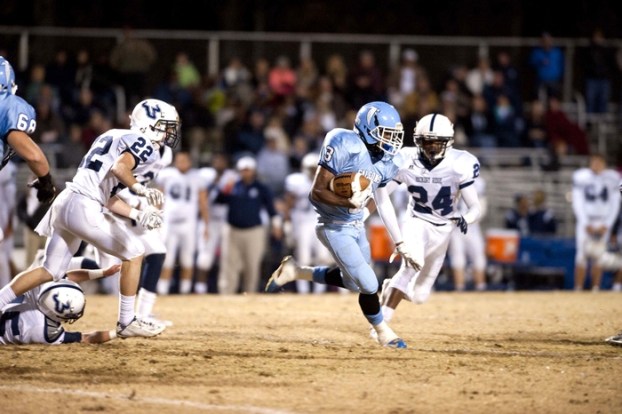 MOUNT ULLA — When West Rowan head coach Scott Young arrived in Mount Ulla for the 1998 season, he was greeted by a South Piedmont Conference schedule that included A.L. Brown and Concord back-to-back and a roster that wasn’t close to deep enough.

One of Young’s best players in a rocky 3-8 debut  season was a 5-foot-8 rock of a young man — Jovon Quarles. Quarles played both ways, rushed for 424  yards, averaged 23 yards per reception, intercepted six passes and made all-county as a defensive back. Quarles was recognized as the fastest football player in Rowan County.

The years fly by, and while the original Jovon Quarles helped Young get his first career win, there’s now another Jovon Quarles on the West Rowan roster. The sophomore wears the same Columbia blue No. 3 his father wore and he helped Young log career victory No. 171 Friday when the Falcons rallied to beat Hickory Ridge 35-28 in their regular-season finale.

“He got back to West Rowan  last year for one of Jovon’s jayvee  games, came in from Hawaii,” Young said. “They’re a lot alike. Not very tall, but really jacked up and put together.”

Quarles grabbed the attention of the coaches this season when he returned a punt 51 yards for a touchdown against Salisbury.

“I actually dropped the ball, but I got a great block from Amos Duncan and went for the touchdown,” Quarles said.

That was the first of what should be many six-point touches for Quarles.

Quarles has been West Rowan’s backup tailback  this season, playing behind senior Harrison Baucom, a 1,000-yard rusher and one of the county’s most versatile players.

Quarles contributed rushing touchdowns in big SPC wins against Carson and Central Cabarrus — he motored 75 yards for his score against the Vikings — and he’s become increasingly important for the Falcons’ hopes now that Baucom has been slowed by a groin injury.

“When the team calls on you, you do your best,” Quarles said. “You try to fill in where you’re needed and you try to step up when you get chances.”

West Rowan was counted out by just about everyone outside the the Falcons’ locker room after getting drilled by East Rowan at home, manhandled by Concord on the road, and losing by two TDs at Cox Mill. But the Falcons got off the floor Friday and beat the SPC’s second-place team.

“We showed up,” Quarles said. “We got it together and we got it back.”

Eighth-seeded West Rowan will be at home in the first round of the 3A West playoffs Friday, entertaining No. 9 North Buncombe. Young points at Quarles as the guy who deserves much of the credit for that home game.

The Falcons (7-4, 5-3 SPC) scored on the opening kickoff against Hickory Ridge — J.T. Sanders went the distance — but the Ragin’ Bulls scored the next 21. The Falcons trailed 21-7 and were backed up at their own 10-yard line.

“Tough situation,” Young said. “We’ve lost three in a row, Hickory Ridge has scored 21 in a row, and now we’ve got terrible field position. But then Jovon goes about 80 yards down to their 9-yard line. That play wasn’t just a turning point — it was the turning point. And now we go from being a 12 or 13 seed to being an 8 seed with a home game.”

L.J. Robinson on defense and Kacey Otto on offense were also huge against Hickory Ridge,  but it was Quarles, who stood tallest of all. He finished with 177 rushing yards on 13 carries. He also had a 100-yard game against Central Cabarrus and now has 508 rushing yards for the season. Not bad for a backup.

“Credit the offensive line for me having a big game,” Quarles said. “They made the blocks. They made the holes. All I did was run.”

As is his custom on game nights, Quarles communicated with his father 3,000 miles away after the Falcons stunned Hickory Ridge.

“I told him I had a pretty good game,” Quarles said with a wry smile.

Jamorya Cousin, Football South Rowan High The senior running back for the Raiders as they ended their season on a... read more