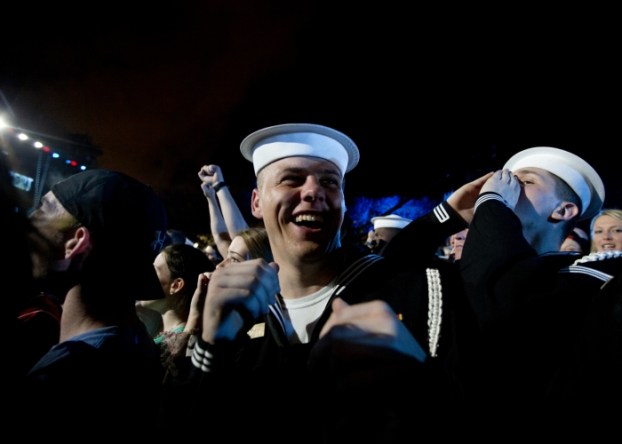 Jerrod Knight of the Navy Ceremonial Guard, center, cheers with the crowd on the National Mall in Washington, Tuesday, Nov. 11, 2014, during the Concert for Valor. The Veterans Day event is hosted by HBO, Starbucks and Chase and is free and open to the public. (AP Photo/Carolyn Kaster)

Your daily look at late-breaking news, upcoming events and the stories that will be talked about Wednesday:

The world’s top two polluters agree on taking ambitious action to limit greenhouse gases, setting an example for other nations one year before key negotiations in Paris.

Amid sluggish economic conditions, the G-20 summit in Australia is zeroing in on boosting the world’s GDP by $2 trillion.

The FAA is receiving daily reports that the unmanned aircraft are flying close to helicopters and planes.

5. HOW EGYPT’S NEXT PARLIAMENTARY ELECTION COULD GO

With the banning of the Muslim Brotherhood and the suppression of dissenting voices, the country’s poll will mostly likely produce a rubber-stamp parliament.

The European Space Agency is trying to land a scientific probe on a streaking comet in one of the most audacious space adventures ever.

8. WHY FIVE GLOBAL BANKS WERE FINED

9. WHAT LENT SIZZLE TO VETERANS DAY IN US

Rihanna and Bruce Springsteen are among headliners at a free concert on the National Mall intended to raise awareness of issues affecting veterans.

10. MLB NAMES MANAGERS OF THE YEAR

Baltimore’s Buck Showalter wins the AL award for the third time. Washington’s Matt Williams, who played under Showalter, gets the NL prize.