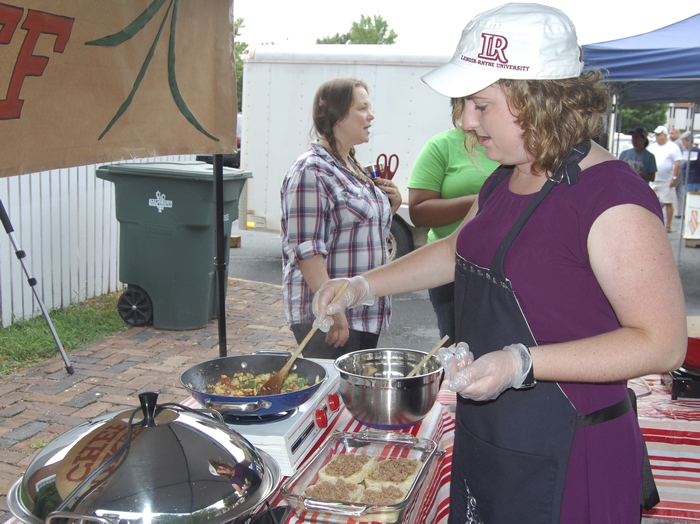 Salisbury Post file photo Quinn Scarvey cooking in the first round of the Market Chef competition. at the Salisbury Farmers Marekt, a new event introduced this year.

Changes are coming to Bread Riot and the Farmers Market that both parties hope will help their organizations thrive.

Bread Riot is advertising for a part-time executive director, its first paid position ever.

Harry Agner is retiring as Farmers Market manager in December.

The boards of both groups saw a chance to help each other.

Capri Brixey, outgoing Bread Riot president, said her group is “going like gangbusters.” The non-profit relies completely on volunteers to do all the work. Because it is so successful, Brixey said they needed an executive director to maintain all their programs.

The Farmers Market is looking for a manager with computer skills to make the most of social media and the Internet.

So the idea came together that the Bread Riot’s director could also have responsibilities as Farmers Market manager.

Mike Turco, who leads the Farmers Market board, said, “With Harry retiring, we thought there was a lot we could do with someone who has computer skills. Harry’s the first to admit that’s not something he has.”

When the Farmers Market board heard about the Bread Riot’s new position, it seemed a natural fit.

Bread Riot is a group which works with local farmers and producers to provide local food to local consumers. there’s no membership fees, but many programs, such as Riot in the Pasture, and bulk meat purchases. They participate in what is known as Community-Supported Agriculture, working with farmers and consumers to match demand and supply. Farmers know they have a certain number of customers and what those customers want.

The chance to coordinate with participants, both vendors and customers, of the Farmers Market seemed to fit right in to their mission of brining local food and local consumers together.

Christine Wilson, who was the first president of Bread Riot’s board, has also been on the Farmers Market board. She knows firsthand how volunteers can burn out or be over-committed. Wilson said, “We’ve done some pretty remarkable things with volunteers. Now we need to grow and jump  to the next level.”

Bread Riot Treasurer Sean Meyers is finishing up his sixth year in that position and is ready for someone else to take over. He said members of Bread Riot have been talking for a while about a mutually beneficial relationship.

Brixey and Meyers said the part-time director position could become full time if the right person is hired and he or she can write for grants or other funds to keep the position going.

Brixery is “very, very excited” about the new position. “We need to move forward. The only way to move forward is to create the executive director employee of Bread Riot. … That person will provide them (the Farmers Market) with technology and a potential for growth.”

Brixey hopes to involve more farmers who can find new markets for their products. She wants farmers to have options to fit in where they want to be.

Danelle Cutting, the Cooperative Extension agent who is the adviser to the Farmers Market, says the idea of having a person in the dual position makes the job more attractive.

Both the Farmers Market and Bread Riot could benefit from someone with marketing experience.

Cutting believes the market has not quite recovered from its move to the location on the corner of Fisher and Jackson streets.

Turco, too, is concerned about location, with the possibility of the current property being sold.

“We think it’s going to be a good partnership.”

The initial contract is for one year.

The Farmers Market is open 9 a.m.-noon through Dec. 20. It will be closed the Saturday after Thanksgiving, Nov. 29.