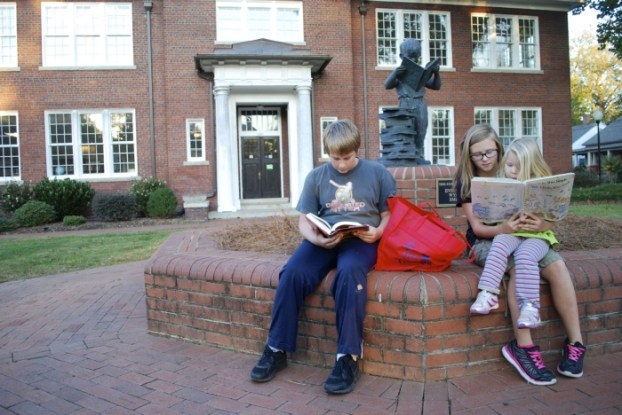 Freshly selected books in their hands, JD Hager, 13, left, Jaden Hager, 11, and Evelynn Short, 3, cannot wait until they get home to begin reading. The children and their parents visit Spencer Library twice a week. 'We never leave with less than 10 books. It's a wonderful resource,' said the children's mother, Danielle Short. Photo by Elizabeth Roy, for the Salisbury Post.

Twice a week, the Short family walks down Fourth Street in Spencer to the town library, book bags in hand.

“We live right down the street,” said Danielle Short, gathering her three children at the bronze statue on Spencer Library’s front lawn. “We never leave with less than 10 books. It’s a wonderful resource.”

Spencer Library is housed in what was once the Spencer High School building, where different age groups from kindergarten through 12th grade were taught from 1913 until 1974. Today, the library provides an experience unique to a small town library. Visitors check out books with paper cards and enjoy the bright and peaceful study areas.

“It’s old-school but it’s charming,” said Cindy Patterson, the librarian and sole employee for the library.

With Rowan Public Library headquarters just up the road, Spencer Library is sometimes overlooked by area residents. But the century-old building serves as more than a place of learning. The library is Spencer’s town heart, and a means of strengthening the community as a whole, says Larry Smith, Spencer town manager.

“The library has always been a cultural, iconic thing,” said Smith. “And a lot of it is being able to attract kids from the immediate area.”

Spencer Library has an average of 12 to 15 visitors each day and houses a full selection of books, from reference to fiction, non-fiction, children’s and teens’ books.

Almost all of the library’s books were in another set of hands before joining the town library’s collection. Donations come from Rowan Public Library, area schools, and the community.

“We are very lucky to have so many books donated,” said Patterson. “People just cannot bear to get rid of a book, so they bring them here.”

Fully funded by the town of Spencer, the library operates on a budget of $1,000 per year for new book purchases. Patterson uses most of those funds to purchase children’s books, she says.

Library-goers are a mix of young and old, Patterson says, many of whom live in a close radius to the library.

To draw in new readers and assist current library-goers, Spencer Library will install a basic wireless Internet system in the next two weeks. An estimated five to seven users will be able to log on at once.

Eventually the library aims to expand its Wi-Fi system to enable tutoring groups at Spencer Library to log onto the public schools’ main frame to study, Smith says.

“Kids with no Wi-Fi at home, many of them also don’t have rides to the main branch at Rowan Public Library,” said Smith. “So that is a group we need to reach out to.”

If the outreach is successful, Spencer Library’s impact on the community has the potential to go much further than books and Internet access.

Smith says that in the community forums, the root community problems all have “a common denominator of literacy,” especially in the younger grade levels. “So the library definitely has a huge part to play,” Smith said.

Spencer Library sits just two blocks off of Salisbury Avenue, adjacent to Library Park which fills the remainder of the city block. The park was redone in the late 1990s and boasts a large gazebo and a pattern of pathways and trees. An average of five weddings per year are held on Library Park grounds.

“It’s a center of pride for our Public Works and the community as a whole,” Smith said of the park.

Regular programming at Spencer Library includes a summer reading challenge, summer story time for children ages 2 to 4, and tutoring — both paid and unpaid — in English and Spanish.

As the single library employee, Patterson does everything from cataloging and processing books to cleaning. She encourages volunteers interested in contributing to Spencer Library programming to reach out.

“I’ve done some things on a small scale and it’s worked, but it does take a volunteer effort,” Patterson said.

Patterson has spent most of her life in Spencer and, along with her husband, John, raised her two sons in the town. In the mornings Patterson works as a teacher assistant at St. John’s Kindergarten in Salisbury, and comes to Spencer Library in the afternoon.

“I like being in my home town and doing a service,” said Patterson. “Spencer Library is definitely a gem.”

Spencer board will hear bids on stormwater project

The Spencer Board of Aldermen will receive bids on a project to fix the stormwater drainage system at the town’s... read more