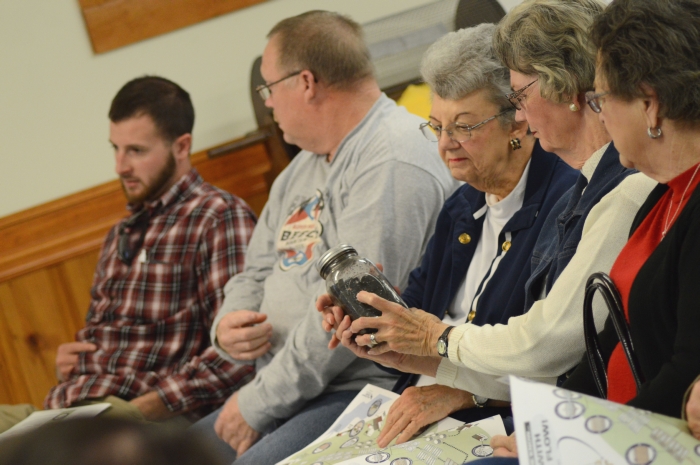 The message on Sunday was clear — don’t bring sewer sludge to Rowan or Cabarrus counties.

Most of the audience at Saint Stephens opposed the potential spreading of wastewater sludge on land in Rowan and Cabarrus counties. The audience peppered CMUD and Synagro representatives about the potential contaminants that sludge contain.

Dr. Lance Riley, who has a Ph.D. in aquatic science from the University of Florida, was perhaps the most outspoken of the audience. He repeatedly asked about Polychlorinated Biphenyl, referred to as PCBs. The Environmental Protection Agency describes PCBs as having a range of toxicity and varying from thin, lightly colored liquids to yellow or black waxy solids. The EPA states that PCBs have caused cancer and various adverse effects on the immune system, reproductive system, nervous system and endocrine system.

Specifically, Riley expressed concerns that CMUD didn’t test it’s sludge for a wide enough variety of PCBs before releasing it to Synagro and subsequently onto farmland.

“You can sample 100 times per day, but, if you don’t broaden your spectrum on what you sample, you might as well just be spinning wheels,” Riley said. “Above and beyond doesn’t mean [sampling] more times per day. It means looking at all 208 PCBs. What else don’t you look at?”

In response to Riley’s question, Jean Creech, who works with CMUD, said her department doesn’t test for some materials because they aren’t common in city wastewater systems.

“We didn’t sign up for it, we don’t want it and our families don’t want it,” said Gold Hill Resident Linda Cline. “If you want to put it in your front yard, fine. You can live with it.”

Besides chemical contaminants, several attendees also expressed concern over the fact that he or she wouldn’t have a significant say in whether the sludge came to the Gold Hill area. Instead, it’s largely up to the farmers that request the sludge for their fields and the North Carolina Department of Environment and Natural Resources.

CMUD representative Maggie Macomber spent a large portion of the meeting explaining the process of how wastewater turns into sludge and later spread on farmland. Macomber said wastewater is first separated into liquids and solids. The liquid material is recycled back into the water system, Macomber said. Remaining liquid in the solid material, which makes up about 0.3 percent of typical wastewater intake, is removed. Though, Macomber said the final biosolid, or sludge, spread on fields may not be 100 percent free of any liquid.

Synegro then takes the sludge to farm fields. CMUD representatives said Synegro has a 10-year contract for $4 million annually with the utilities department. The contract includes two, five-year renewable terms.

Creech said regulation of sludge began in the late 80s and early 90s. Previously, no permit was required to spread the biosolid material on farmland, Creech said.

The attendees immediately questioned Puryear’s estimates, asking why is a delay needed if the material is so popular among farmers and safe. Puryear’s response was simply that the sludge needs time to break down.

After being prodded multiple times by attendees, Creech stood firm on the quality and low environmental impact of sludge, partially citing the fact that it doesn’t smell and the sampling tests that CMUD conducts. Creech also said none of the farmers who have participated in CMUD’s sludge spreading program through Synegro have stopped because of negative effects of the biosolid material.

After nearly an hour, a cattle farmer sitting near the rear of the room stood up and briefly talked about his experiences with the sludge. However, Brian Tadlock, who farms cattle in Rowan County, began by saying that Rowan and Cabarrus residents wouldn’t receive sludge if they didn’t want to.

“When they put the sludge out, the very next day me and him were standing right there in it and there was no smell,” Tadlock said.

Tadlock was quickly cut off by attendees who were against the sludge being brought to Rowan or Cabarrus.

After nearly two hours, the meeting ended with attendees still largely opposed to Synegro applying any sludge to fields in the area.

A map prepared by Riley shows more than a dozen sites in Rowan and Cabarrus counties near Gold Hill and a handful of sites between Woodleaf, Statesville and Cleveland.

For anyone with comments about the applications, CMUD representatives encouraged attendees to contact the N.C. Department of Environment and Natural Resources.