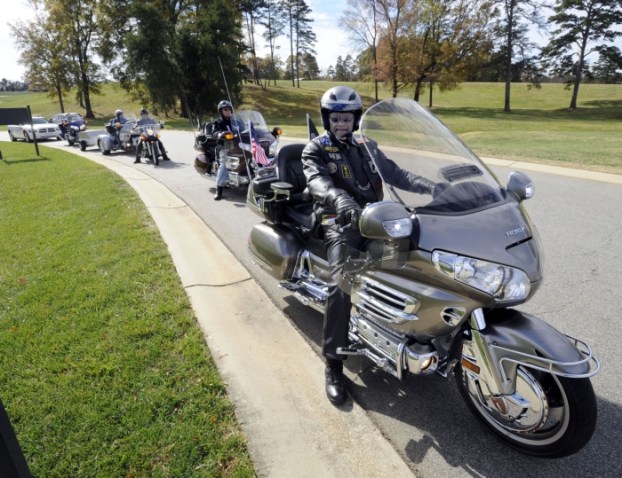 Levi Clemons, Jr on the front motorcycle at the National Cemetery Annex before the start of the ride to Statesville. Clemons is the president of Chapter 272 of the Vietnam Veterans of America from Greenville, NC. Only 5 motorcycle riders showed up at the cemetery. photo by Wayne Hinshaw, for the Salisbury Post

A motorcade of cars, motorcycles and an 18-wheeler honored Vietnam veterans Saturday by making the 30-miles journey to Statesville.

The ride, named Rumblequake, is the third of its kind and the second time the ride began at the Salisbury National Cemetery Annex. Organizer Burgess Bailey said he switched the ride to the cemetery from the Tilley Harley-Davidson dealership in Statesville after his brother-in-law’s death in December 2012.

His brother in law, Perry Turner, served in the U.S. Army and was a Vietnam veteran. During his service, Turner received the Purple Heart and Bronze Star. Turner didn’t die in action, Bailey said.

Despite Turner’s military history, Bailey said the ride was to honor all veterans, including those in other wars. Turner said raising awareness about veteran suicide was also a reason for the ride.

“It’s really the driving force behind the whole thing,” Bailey said. “Part of this is an outreach.”

Before the ride even occurred, Bailey went to Rowan County and Iredell County Commissioners to get a proclamation declaring Nov. 8 Rumbplequake day. Gov. Pat McCrory also signed a declaration that Nov. 8 would be Rumblequake Day.

On Saturday, five motorcycles were part of the motorcade, one of which was Greenville resident Levi Clemons Jr., the president of Vietnam Veterans of America Chapter 272.

“It’s always an honor to me and I’m so humbled by it,” Clemons said about the ride. “I was in two wars and I get emotional sometimes, so it is an honor to me to ride because we all gave something but some gave it all. Motorcycles are my therapy. I can get on it, ride wherever I want to ride and don’t get a lot of lip.”

Before leaving the cemetery, the Clemons read the proclamation from McCrory. The reading was followed a brief prayer and balloon release at the gravesite of Turner.

The small group of riders then fired up their bikes and rolled out of the cemetery.

Waiting in Statesville for the riders was a one-of-a-kind structure — called the North Carolina Moving Wall. The wall lists the names of all casualties in the Vietnam war that were from North Carolina. It was orginally completed in 1990 as a part of a veterans day program in Greenville. The wall was subsequently donated to Clemons’ chapter of the Vietnam Veterans of America.

Besides just having the wall waiting in Statesville, Bailey said there were also 1,500 pictures of veterans listed on the wall. The pictures included date of birth, date of death and what city the person was from.