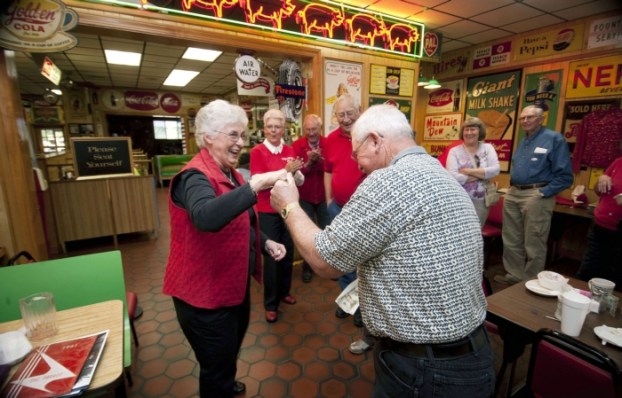 JON C. LAKEY / SALISBURY POST Anne Shive and Ronald "Butter" Seamon show off their shaggin dance skills. The class of 1961 was the last to graduate from China Grove High School. The following year students graduated from the new high school called South Rowan High. Ever since the 50th reunion three years ago, the last Red Devil classmates started a tradition of meeting once a month at Gary's BBQ for a meal. Tuesday, November 4, 2014, in China Grove, N.C.

CHINA GROVE — The China Grove High School class of 1961 had so much fun at its 50th reunion three years ago that they decided to get together more often.

Not only do classmates gather the first Tuesday of each month at Gary’s Barbecue, they also have taken several trips together.

Their principal, the late Jesse Carson, told the class they were one of the tightest-knit groups he’d ever seen. He was right.

Mr. Carson would surely be excited to be part of these monthly gatherings.

Shirley Medley Alexander organizes the monthly dates. Her classmates respond, because the restaurant’s side dining room was full this past Tuesday.

Shirley and Jerry Hartsell arrive well before the 11 a.m. gathering time to fill a couple of tables with high-school paraphernalia. Jerry, a member of the football team, displays his old score book, the senior-year football schedule, even mimeographed copies of plays. Shirley shows off her diploma, graduation invitation, yearbooks and other mementoes. She always wears her class ring each month and is thrilled that she still can. China Grove’s colors were red and white, but she chose a blue stone. So did Jim Price, who lives in Indian Land, S.C. He also sports his class ring today.

This was the last class that graduated from China Grove High School. Younger students would go on to South Rowan High School as a result of consolidation. China Grove and Landis high schools were big rivals in football and basketball, but that all changed when those kids ended up at South.

Jerry and Jim and Clint Eudy and Jerry Poole and the rest of the team played for Lope Linder, a legendary coach in the South area who died in 2002.

Jerry turned in game stories to the Salisbury Post and the Daily Independent.

“I got a dollar from each paper each time I called a game in,” he says. “That’s how I paid for my class ring.”

Ann Shoe Shive was a majorette all four years of high school. She’s brought her uniform with her, all red with the red sequins still a bit sparkly.

“I loved every minute of it,” she says. “My sister, Doris Bame, wore the uniform for four years before me. My mother sewed in long sleeves. We shared the boots. We had them resoled several times.”

Now she has one and Doris has one.

“We twirled fire, too,” she says. “Scary! Yeah, I can still twirl that thing.”

She did not bring a baton today to prove it.

Sara Anthony Hill was a top scorer in basketball. She couldn’t come but sent her jersey.

Gail and Danny Deal were classmates who’ve been married 52 years. Danny didn’t graduate, and to this day can’t really tell you why he dropped out.

“I don’t know,” he says. “I just was rowdy. I just had other things to do. I just didn’t realize what I was doing.”

Danny took classes at Rowan Tech and correspondence courses, and eventually ran his own heating and air conditioning business.

And because his parents played music on the radio, Danny got into music too, especially the old-time music. The Deals were a part of the Yadkin Valley Folklore Society for years, holding meetings at their home.

He throws his arm around Gail, always close by.

“These are two people who love each other,” he says. “We never even dated anybody else. I went out with Gail on her 16th birthday. I just knew.”

After he quit school, Danny used to come by and see Gail at lunchtime before working second shift at the mill. But one day, they were sitting out on the lawn and Danny laid his head in Gail’s lap while they talked. Mr. Carson immediately appeared and ran him off. That was Danny’s last visit to see Gail on campus.

But Danny and Gail took no offense, and Ann defends their principal.

“He really needs to be spoken well of,” Ann says. “He was a great principal and held China Grove High School together.”

“He was strict,” Shirley says.

“He meant business,” Ann agrees. “But he was very special. He loved us all. He was a sincere person and very well liked.”

The class was gratified when the county’s newest high school was named for Mr. Carson.

The closer it gets to 11 a.m., the bigger the crowd gets.

“We started this lunch at Gary’s in 2011,” Shirley explains. “One of our classmates in New Mexico, Harold Hooper, said, can you get some classmates together? He’d never been to a reunion but he came for the 50th.”

About 30 usually attend, Shirley says. After some discussion, she and Jerry decide they had 87 graduating members of their class.

Jerry got up a trip to Brattonsville, S.C., after he and wife Joan (pronounced Jo Ann) visited on the way home from Savannah. They’ve also been to Mount Airy, and to Shirley’s house at High Rock Lake a couple of times for picnics. Shirley is planning a beach trip for the group in February. They can get fantastic rates then, she says.

Alice Kluttz Davis comes in with a big smile on her face. She grew up on the farm she owns today.

“I wanted to take agriculture with Mr. John Allison,” she says, “but they wouldn’t let girls in his class.”

She laughs about it now. And really, she has the last laugh, because she raises beef cattle and grows hay on 50 acres. She uses two tractors, along with a rake, cutter and baler, to put it in the barn, all by herself.

“She used to ride her horse up to my house,” says Betty Menius Lyles, who’s come from Cary, despite recent eye surgery. “We were a close group. We spent all 12 years together in school. It’s just so good to see all these people.”

Shirley is surprised to see Ronnie Overcash, one of the few classmates still working full-time. He retired from the Food Lion warehouse but that didn’t last long.

This afternoon, he’s on the way to see his grandson, Seth Martin, play basketball for Catawba Valley Community College. It’s safe to say that Ronnie has missed few games over the years.

About 11:15 a.m., Clint Eudy arrives from Greensboro, to a smattering of applause.

“Look at all these old people!” he jokes.

Also a football star, Clint went on to play football at UNC, where he was a Morehead Scholar. He retired as an attorney before becoming a nurse for 10 years. He remains an avid cyclist, despite the fact he was hit by a truck several years ago. His China Grove classmates came to visit him as he recovered.

“These are my folks,” Clint says. “I am so glad that Shirley has gotten this organized. I just enjoy it more than I can tell you.”

“Growing up and being with them has been a wonderful experience,” he says. “These are my people.”

His classmates, he says, have been a tremendous support to him and his wife, Joan Gavron Price, a 1960 Boyden High School graduate who’s fought breast cancer for the past eight years. She’s part of a group that calls itself the Boyden High Babes.

Over trays of barbecue, Jim and Clint talk about President and Mrs. Kennedy. During a class trip to Washington senior year, Jim snapped a photo of the First Lady with his Brownie box camera. It’s a beautiful image, which he keeps tucked in the front flap of his yearbook.

“She was just gorgeous,” Jim says.

He was in the Navy when he heard that the president had been killed.

“That just knocked my socks off,” he says. “He was young, and had a beautiful wife. It really was a Camelot era. It was a special time.”

Reid Benfield, Ronald “Buttermilk” Seamon and Lloyd Bell have come together today. They always do. Murl Leazer slips in from Rockwell. Reid’s brought the original head to the school’s bass drum. Ronald takes a look at Jerry’s football players, remembering each by the number it was assigned.

But Ronald has no idea how he got the nickname “Buttermilk,” which Ann shortens to “Butter.”

“We had some good times, didn’t we?” Ann says. “Going to the canteen and dancing? We were on the Jimmy Kilgo Show in Charlotte. Johnny Walker and I had the spotlight dance.”

It was the shag, Ann says. She holds out her hand to Butter, who takes it, and they dance a few steps, right there in the side dining room at Gary’s.

“We got it, Butter!” Ann says. “We will never forget that step. We had the best time!”

“We sure did,” Butter says.

KANNAPOLIS — It’s the kind of conversation you don’t forget, and Wally Safrit never will. A year ago, Safrit found... read more