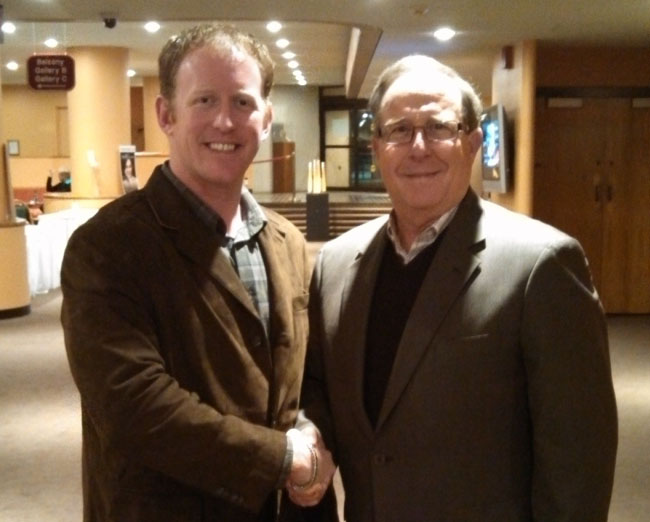 KANNAPOLIS — It’s the kind of conversation you don’t forget, and Wally Safrit never will.

A year ago, Safrit found himself deeply enthralled in a personal conversation with the Navy SEAL who fired the shots that killed Al Qaeda leader Osama bin Laden.

Now that Robert O’Neill has publicly identified himself as bin Laden’s killer, Safrit is free to talk about their meeting and even share the picture his son, Wil, took of him with O’Neill in High Point last November.

At the time, O’Neill asked Safrit, attorney for the city of Kannapolis, to keep their discussion to himself because of the concern of reprisals.

“I promised to keep his confidence,” Safrit said.

But this week, in an interview published by The Washington Post, O’Neill confirmed he was the SEAL who delivered two fatal shots to bin Laden on May 2, 2011, during a raid on bin Laden’s compound in Pakistan.

“I guess the thing I found most remarkable was how All-American and ordinary he looked,” Safrit said. “… He was a good guy, and it was like meeting an American hero, an unsung American hero.”

Safrit quickly corrected himself and said he definitely had met an American hero that day.

O’Neill had first recounted his story to Esquire magazine in February 2013, but was only referred to then as “the shooter.” His interviews with Esquire and the Washington Post are quite similar to what he described for Safrit last year.

Safrit acknowledged Friday he almost has a feeling of relief being able to talk freely now about meeting O’Neill. He said he is looking forward to a television interview with O’Neill scheduled to air on Fox next week.

“It will be interesting to see if what he says matches up with what he told me,” Safrit said.

Safrit says his connection to O’Neill starts when his wife, Lynne Scott Safrit, and their daughter, Elizabeth. They were attending a Las Vegas event when Elizabeth was serving as Miss Charlotte in connection with the Miss USA pageant program.

Lynne and Elizabeth met and talked for awhile with O’Neill then. In their conversations, he only identified himself as a member of Navy SEAL Team 6.

In November 2013, when Elizabeth was competing in the Miss North Carolina USA pageant at the convention center in High Point, Wally Safrit was talking with one of the judges, who in turn introduced a friend of his, O’Neill, and mentioned he was a retired Navy SEAL — the same guy who had spoken with Lynne and Elizabeth in Las Vegas.

While things were happening with the pageant, Safrit and O’Neill were in a lounge area and struck up a conversation about the military, which holds a keen interest for Safrit, and he especially was intrigued, he said, with the Navy SEALs.

When O’Neill mentioned he was a member of SEAL Team 6, which had conducted the raid leading to the killing of bin Laden, Safrit said his reaction was, “Holy cow, we’ve got to talk awhile.”

The two men talked about an hour, Safrit said, and O’Neill spelled out the limitations for him up front, asking him to keep his name and most of what they talked about confidential.

Safrit said his first question was whether the movie about the raid was anything like the actual mission. O’Neill told him it was about 75 percent accurate.

O’Neill talked a lot about their training and preparations for the secret mission. If he remembered correctly, Safrit said, the SEALs practiced in North Carolina where a structure similar to the bin Laden compound in Pakistan had been built for their training.

Two helicopters carried the SEALs into Pakistan, and the flight was a long one, O’Neill told Safrit. The helicopters also had to fly quite low to avoid detection.

According to O’Neill, the team members all understood there was a good chance they might not be returning from the raid because they were crossing into hostile territory without consent and were likely to face ground-fire and rockets.

“There was a lot of apprehension,” Safrit said.

O’Neill told him some of the guys slept on the lengthy helicopter flight, and others eased the tension by joking around. O’Neill’s coping device was to count from 1 to 1,000, and on reaching 1,000, to start over.

Cairo, SEAL Team 6’s canine, sat at O’Neill’s feet for much of the trip. Safrit asked O’Neill what his position in the mission was, and O’Neill said he was team leader. “I’m not sure what that means,” Safrit said, “he just used that term.”

When the helicopters reached the compound, “he did say he was very nervous when they got there,” Safrit said. The moment before he exited the helicopter — for reasons O’Neill didn’t know why — he thought back to a quote President Bush made the day of the Sept. 11, 2001, terrorist attacks master-minded by bid Laden.

Paraphrased, Bush said, the country had been attacked by a faceless coward, but in turn the United States would defend its freedom.

O’Neill told Safrit that just the thought of those words had a calming effect on him and made him ready to do his job. It was at that moment, he showed Safrit the tattoo on one of his arms that said, “We shall defend freedom.”

Inside the building, the SEALs were concerned about confronting guards and booby traps. The job of O’Neill and his partner was to check out the first floor before heading upstairs.

The other SEAL team member said something to O’Neill, and both realized they were outside bin Laden’s room. Maybe like honors in golf, Safrit said, O’Neill as team leader was designated to go in first while the other guy checked for booby traps.

As told to Safrit, the men pushed through the door, and wearing night goggles, O’Neill clearly identified bin Laden in the room with a woman in front of him.

“I don’t know if he’ll ever tell this part,” Safrit said, “but he (bin Laden) held this woman in front of him, and the only way to get a clear shot was to dispatch the woman. I assume he shot the woman.”

With the woman out of the way, O’Neill told Safrit he shot bin Laden in the head — one of two shots he took to kill the terrorist.

The rest of the mission for the SEALs encompassed putting bin Laden’s body in a bag for transport and searching the premises for any intelligence information they could take with them.

“At that point,” Safrit recalled of the conversation, “I was just trembling.”

You would think the man who killed bin Laden might be a big, strapping, muscular guy, Safrit said, but O’Neill was about 5-11, fit, red-headed and looked more like a tennis player.

Safrit learned O’Neill, who is now a motivational speaker, was from Montana. The fact never came up that O’Neill also was part of Navy SEAL Team 6 when it rescued Capt. Richard Phillips, whose story was portrayed in the film, “Captain Phillips.”

O’Neill agreed to a photograph with Safrit — again with the understanding it not be published while he still had anonymity. When Safrit asked O’Neill whether he planned to write a book, he said not yet, but maybe deeper into the future.

There has been much debate in the special operations community about whether team members should ever break their silence about secret missions, such as the bin Laden raid.

She will be heading off to London Nov. 19 to compete in the Miss World pageant, scheduled for Dec. 14.

Meanwhile, her father is trying to arrange for all of her luggage to go with her to London and, of course, thinking back to that conversation with O’Neill.

Safrit wants to make it clear the men are not buddies, and he doubts O’Neill would even remember him if they met today.

But he still thinks back to the picture O’Neill painted for him of bin Laden hiding behind one of his wives as the moment of truth was about to be delivered.

To his last breath, Safrit said, bin Laden was still the coward President Bush had described.