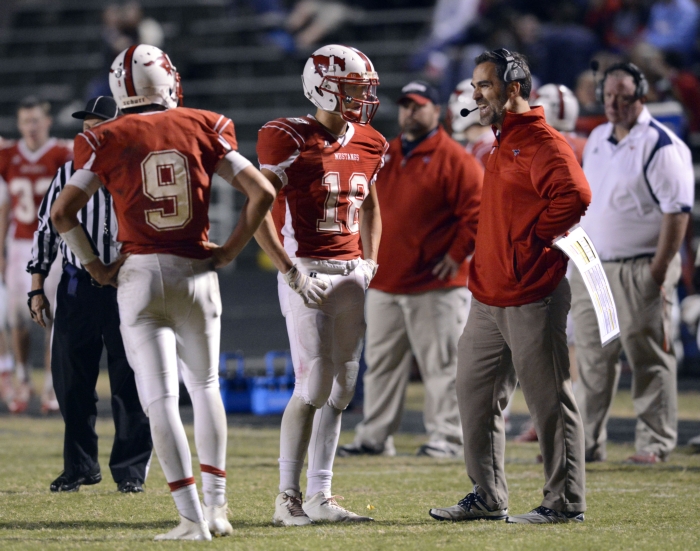 East's Sam Wyrick #9 and Seth Wyrick #18 talk with Coach Ken McClamrock on the sideline. photo by Wayne Hinshaw, for the Salisbury Post

It’s the last Friday of the regular season, and the North Rowan vs. Salisbury matchup in the unofficially-named Central Carolinas Conference championship game people started talking about three weeks ago is now a reality. That’s obviously the feature game.

Also important is Cox Mill at Carson, a matchup in which the hard-luck Cougars appear to be playing a “playoff game” just to get into the playoffs. East Rowan, charging after a slow start, will be third in the South Piedmont Conference if it wins at South Rowan. This will be the last one for the Raiders, win or lose. Reeling West Rowan is in the playoffs, but it has its work cut out at home against high-scoring Hickory Ridge.

A.L. Brown is a playoff team if it beats Hopewell. Davie County owns a spot in the 4A playoffs, but it could use a win against Mount Tabor for fourth place in the Central Piedmont Conference, a better seed and momentum.

This is the 50th meeting of the neighbors, and it’s the biggest North Rowan-Salisbury game since 2006 when both entered the final week 4-1 and fought for the CCC championship. The Hornets pulled out that one 16-13.

North Rowan drilled the Hornets 41-0 in Spencer a year ago, and these Cavaliers are comparable to the 2013 squad that was ranked No. 1 in 2A most of the season.

The Hornets are far better than they were a year ago when they went 2-9. They have a steady running game with fullback Willie Clark and halfback Antwond Glenn, and they have won five of six games after starting 0-4. Still, the Hornets aren’t as explosive or experienced as the Cavaliers, who boast gamebreakers in Shrine Bowl back Jareke Chambers and receivers Sakil Harrison and Shareef Walker.

North Rowan has won six in a row since looking shaky in back-to-back September losses to Statesville and Davie County.

It’s all about peaking at the right time, and the Mustangs, who claim third in the SPC if they win, are doing just that. They would get votes as Rowan County’s second-best team. They’ve won three of their last four, including road victories at West Rowan and Central Cabarrus.

While the Wyricks have been constants, East’s recent upswing can be attributed to a defense that’s gotten steadily better and the rise of a running game built around Max Wall. The Mustangs are pretty solid in every phase right now, including special teams.

After two early victories raised expectations, South Rowan has seven straight losses. The Raiders average 6.8 points per game the last five weeks, so it’s highly unlikely they can keep pace with the Mustangs.

Cox Mill was part of a four-way tie for fifth in the SPC in 2013 and was the odd team out as far as making the playoffs.

Carson will try to dominate the line of scrimmage while throwing Rowan County’s top running game and the area’s top two rushers at the Chargers.

Carson is better than its record, but the Cougars are just 2-4 since they put it all together and mauled East Rowan 48-21 on Sept. 19.

Carson rolled Cox Mill 49-21 last season in the first meeting of the schools to claim third in the SPC.

Hickory Ridge, headed for the 3AA playoffs, has lost only to SPC champ Concord, and that one went to the wire. Receiver/returner Nate Mullen, a Shrine Bowl pick, has explosive speed and leads the Ragin’ Bulls.

West Rowan not only has lost three straight, it really wasn’t competitive with East Rowan or Concord during that stretch. To have a chance against Hickory Ridge, the Falcons have to get their running game back on track. Harrison Baucom needs 15 yards for 1,000.

Despite their recent struggles, the Falcons are playoff-bound for the 13th straight season.

The Falcons ran all over Hickory Ridge 45-24 in 2013 in the first meeting of the programs.

It would be difficult to find two teams with more similar seasons. Both beat the CPC’s two weak squads while losing to the three strong ones. Both teams have two-game winning streaks.

Both teams appear to be locks for the 4A playoff bracket. That’s a step forward for Davie since it didn’t make it last year.

Mount Tabor is favored because it’s 4-1 at home. Mount Tabor leads the series 17-10 and beat the War Eagles 42-21 a year ago. Mount Tabor has won the last three meetings. The War Eagles’s last win against the Spartans came during its Cinderella 2010 playoff run to the 4A championship game.

The Wonders suffered a surprising 19-14 loss a year ago when the teams were battling for third place in the Mecka, although the Wonders were more M.A.S.H. unit than football team by that point in an injury-plagued 2013 season.

Healthier this time, the Wonders are expected to beat the Titans and secure a spot in the 4A playoffs.

Hopewell has struggled in a tough league and has lost to North Mecklenburg and West Charlotte, two clubs the Wonders handled. Hopewell’s two victories came at the expense of Robinson (0-10) and Garinger (0-9).