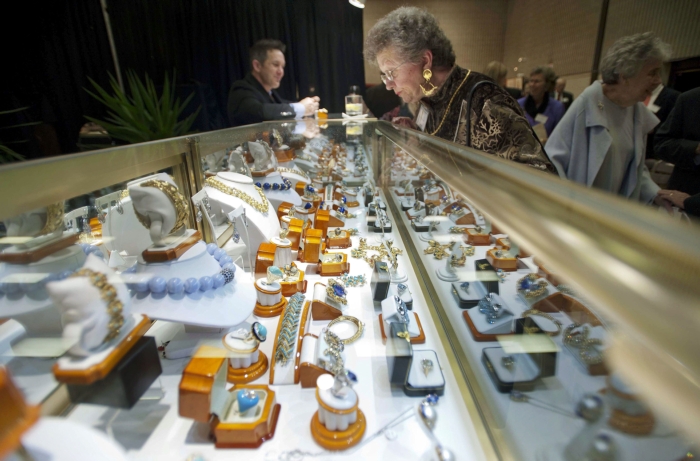 JON C. LAKEY / SALISBURY POST Nancy Stanback looks at the estate jewerly found at the booth of the D.R. Grissom Collection at the 61st annual Salisbury Antique Show and sale to benefit the Rowan Museum.

There’s something comforting about the consistency of the Rowan Museum’s Antiques Show and Sale. The dazzling jewelry by D.R. Grissom. The pristine white linens by Victoriana. The glistening silver by 1839 Antiques. The exquisite paintings from Old Sarum Gallery.

In a world that’s constantly changing, the 61st annual show continues like clockwork the first weekend in November. (You can find antique clocks there, too.)

But things do change, and many of the event’s longtime committee members are passing on this autumnal tradition to a new group of eager workers. That doesn’t mean the old guard wasn’t on hand Thursday evening for the Patron’s Party.

Lib Taylor, a longtime show organizer, received numerous hugs and kisses as she made her way through an adoring crowd. Taylor wore a lovely light blue jacket and matching top which perfectly matched her eyes.

“I’m glad to be here,” Taylor said, but the belle of the ball demurred when asked her age.

“She is ageless,” said Rick Anderson McCombs, then kissing her cheek.

Jay Dees did the same.

“She is eligible for Social Security next year,” he said. “I’m helping her with the paperwork.”

Who says you can’t trust an attorney?

Lillian Gascoigne has retired from staffing a booth for Lillian’s Library, but was thoroughly enjoying looking at other vendors’ wares. She chatted with Carol Palmer about artwork in the 1839 Antiques booth. Some 15 vendors are on hand this weekend.

George Kluttz and Andy Arthur took note of a detailed model of a ship, enclosed in a glass case. The two debated whether it was a Spanish galleon, then noticed the name “Furieux.”

“You need that,” Arthur said.

Terry Holt was on the hunt for a quilt that would be a Christmas gift for his daughter-in-law. She is Lumbee-Native American, and he hopes to find a quilt with a pine cone pattern, he said. It’s OK — she knows he’s looking.

While staff from Best Impressions of Charlotte passed trays of hors d’oeuvres, patrons and dealers chatted like they were old friends, which of course they are. Marc Hoffman provided background music on a grand piano.

But things do change, because Hoffman was playing music from a list displayed on his iPad.

“It freed me up from a 7-pound book,” he explained. “I need a chord reference once in a while. But it won’t play for you.”

While patrons mingled, Clyde was ready for folks to step into the tent for dinner. He and Oliver Scott had done the décor: sage tablecloths topped with lace, and ivory linens.

“Look at this rose,” he said, pointing out a bouquet with a Leonidas rose often called a chocolate rose because of its unusual coloring. The tables were set for 150 guests. Clyde thought two large chandeliers hanging overhead added just the right touch.

Clyde said he’d been at the antiques show for all 61 years — but you can’t believe everything Clyde says now, can you?

That tradition continues, thanks to new committee members who are taking the lead.

“We just couldn’t not do it,” said Jeannie Misenheimer, who along with husband Tommy is one of the show’s major sponsors with Dale and Margaret Basinger. Other major sponsors include Carolyn and Gordon Hurley and Susan and Edward Norvell.