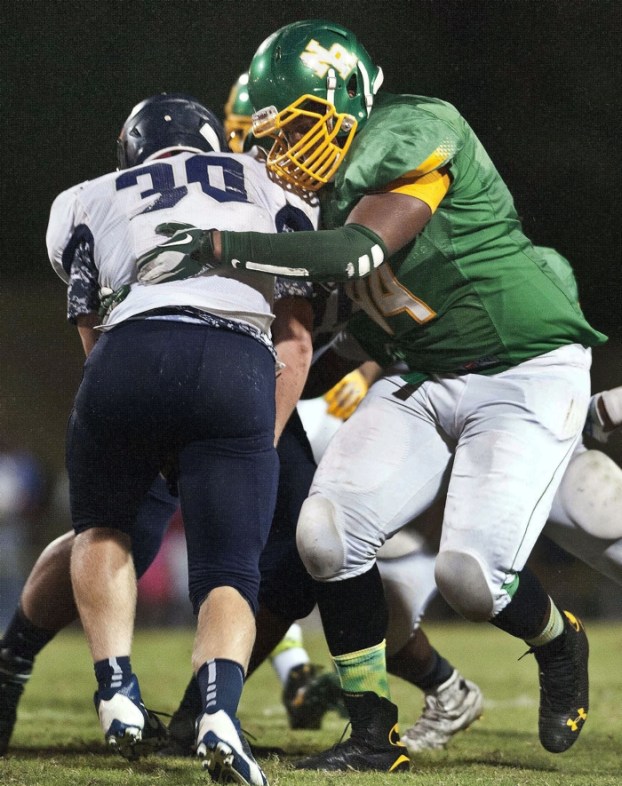 There were distractions for the Cavaliers (8-2, 4-0 CCC) that included wiping tears out of their eyes.

“Senior Night,” the 6-foot-5, 285-pound Jefferies explained with a smile. “We were pumped up, maybe too pumped up. It was emotional.”

Thomasville’s Ja’hare Taylor Thomas woke up the Cavaliers with a 71-yard touchdown run five minutes into the game.

“You want to yell at your guys, but after you look at the film, all you can do is give the Thomasville kid credit,” North Rowan defensive coordinator Steve Williams said. “He made one hell of a cutback run.”

D.J. Spann’s 91-yard kickoff return in the first minute of the second quarter also got the Cavaliers’ attention. That play gave the visitors a 13-7 lead, but Thomasville didn’t enjoy many more positive moments. Once the Cavaliers’ defensive line settled in, it dominated. Taylor Thomas ran the ball 19 times for 104 yards, so other than the TD, he had 18 carries for 33 yards.

That meant a lot of second-and-9 and second-and-11 situations for the Bulldogs, who were usually behind schedule after first down.

“Win first down,” Williams said. “That’s what we preach.”

Jefferies did a lot of that winning. His nine tackles included six tackles for loss. Thomasville doesn’t throw a lot, but Jefferies also managed 2.5 sacks.

“It was his best game of the season,” North Rowan head coach Joe Nixon said. “He was beating their O-line with great technique and he was playing with a high motor. It was the kind of high-caliber game we want from him and need from him.”

Nixon said the defensive line as a whole had a strong game.

“My teammates helped me a lot,” Jefferies said. “I was getting off the ball fast and usually I was at the right place at the right time.”

Because of his size and potential, Jefferies spent his sophomore season on the varsity squad. He played only a handful of live snaps, but he practiced against good players and improved his technique. Jefferies put what he’d learned into use as a run-stuffing junior. He produced 23 tackles for loss and earned All-CCC and All-Rowan County accolades.

As a senior, Jefferies is one of the standouts on the county’s best defense.

“We had a good defense last season because we had exceptional players (seniors Xavier Robinson, Mike Robinson, Cecil McCauley and Kasaun Coney) in the right spots,” Williams said. “But I think our defense right now might actually be stronger. We’re deeper than we were last season and we’re playing better and better as a unit.”

North Rowan hasn’t shut out anyone yet, but it has allowed only 58 points in its last six outings.

“Our job is to put our talented offense in position to win,” Williams said. “We’re doing that.”

Williams, like Nixon, was on the coaching staff for state-championship teams at West Rowan before moving to North Rowan when Nixon got the job in Spencer before the 2012 season. Williams draws on those winning experiences quite a bit.

“Those strong defensive lines and their ability to stop the run was huge on those winning West teams,” Williams said. “I see the same kind of commitment by our defensive linemen here. After we lost in the playoffs to Shelby last season, I think it helped our kids and motivated them. A lot of these guys started working out at 7 a.m.”

Jefferies is one of those guys who put in extra work.

He’s being recruited by Mid-Eastern Athletic Conference programs South Carolina State, North Carolina A&T and Hampton. There also are D-II schools such as Tusculum in the picture.

“He’s a 280-pound kid who moves like he’s 230,” William said. “He’s got long arms, and he’s going to keep getting bigger. He’s a D-I kind of talent. We’ve just been kind of waiting for him to turn it on — and he did against Thomasville.”

A year ago, the Cavaliers were unbeaten and ranked No. 1 in The Associated Press’ 2A prep poll at this point. This time, they have a similar team with similar capabilities, but they’re unranked.

They’re enjoying their time under the radar.

“I really like the way we’re playing,” Jefferies said.