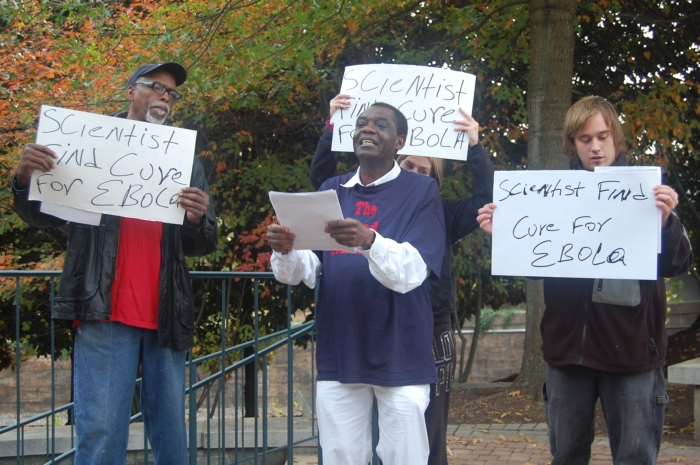 Alexander Freeman sings a song he wrote urging scientists around the world to work toward finding a cure for Ebola as supporters hold signs bearing the same message. Freeman was born in Liberia, where more than 2,400 people have died from the virus. Scott Jenkins/Salisbury Post

Alexander Freeman has lived in the U.S. since 1996. Even so, when he sees how the Ebola virus has ravaged his home country of Liberia, he cannot look away.

“It started in my country,” Freeman said. “I love my country, and my country is falling, my people are dying.”

That’s why, Freeman said, he organized an event held Wednesday calling on scientists around the world to work toward a cure for Ebola, and on nations and wealthy individuals to help fund that effort.

Only four cases of Ebola have been diagnosed in the United States. Two of those originated in Africa, and only one has resulted in death.

But the story is vastly different in west Africa.

The World Health Organization said Wednesday that 4,818 Ebola deaths have been reported, with half of those in Liberia. Every district in Liberia and neighboring Sierra Leone has been affected, the organization said.

Freeman — who said he is an evangelist and wore a T-shirt Wednesday with “The Good Samaritan” printed on the front — said he hopes the small event he led in Salisbury is the first of many. He wants to travel and take his message to other cities and nations.

At the noon Wednesday ceremony at the corner of Innes and Depot streets, Freeman sang two songs he wrote, both centered on his plea to the world. Supporters stood behind him holding signs urging scientists to find a cure.