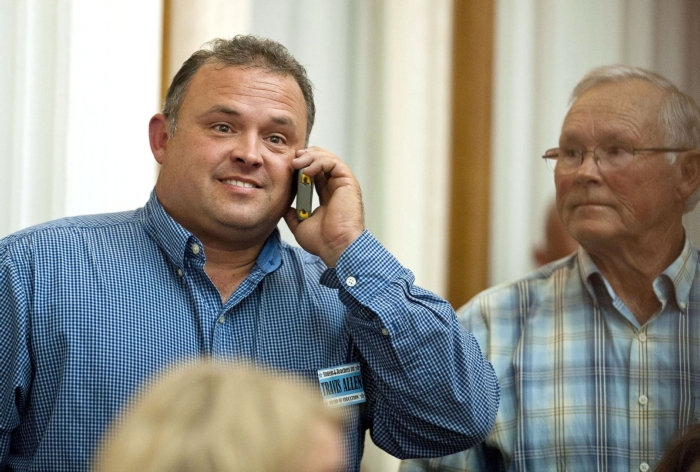 JON C. LAKEY / SALISBURY POST Travis Allen emerged victorius in his bid for a seat on the Salisbury-Rowan Board of Education.

“There are going to be some big changes,” Allen said.

When votes first started trickling in, each of the incumbents held fairly strong leads, but about halfway through the evening, the tide began to turn.

As each challenger rose to the top, cheers erupted around the Board of Commissioners’ meeting room, where candidates and their supporters gathered to watch the votes roll in.

Allen, an investigator for the Rowan County Sheriff’s Office, took seat four from Wright Norman, who has served for the past 20 years.

“We worked really hard,” Allen said. “We knew it would come down to 5 percent either way.”

“Money cannot buy our schools,” he added. “I want to look through the filter of putting our students and teachers first.”

Hunter said he was “a little stressed” up until the very end. “I think it was more difficult than I thought, overcoming an incumbent.”

Hunter said he believes his victory is due to people’s dissatisfaction with the “direction of the current board.”

“I just want to see the board begin to make decisions that are in the best interests of students and their education,” he said, adding that he feels recent financial decisions, especially some concerning the central office, were made to benefit outside interests rather than students.

“I’m not opposed to a central office. I never have been, but priorities should be on the teachers, the schools,” he added.

“We’ve got a lot of projects that I hope they don’t stop,” he said, adding that he hopes the new board members make decisions that are “good for the kids in the county.”

“I felt that all the candidates were viable and that I would run on the record I’ve established,” Miller said.

He added that he believes being out in the precincts and talking with voters one-on-one were deciding factors in the race.

“I’d like to basically see us continue the initiatives we’ve started,” he said, emphasizing literacy as a priority.

Although he lost against Miller, Hardin said he’s excited to see the board take on a more conservative and transparent tone.

“I’m pretty pleased with the total outcome of the election with Travis and Dean getting on the board,” he said.

He added that he hopes to see Josh Wagner become the new chairman of the board.

Seat six represents an L-shaped portion of the county that runs through downtown Salisbury and into East Spencer. Kennedy lives on Grady Street in Salisbury.