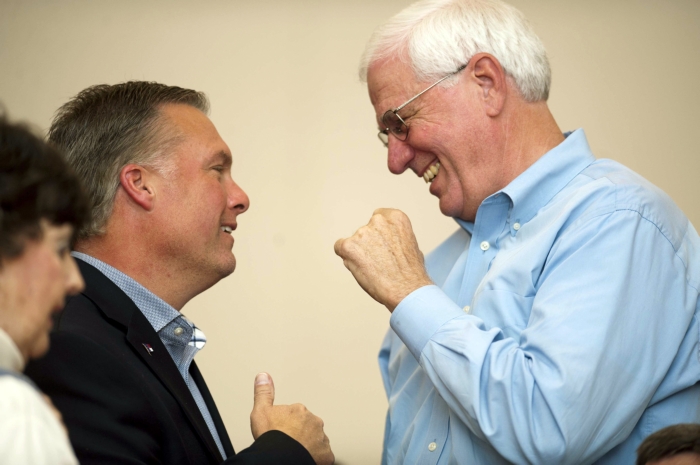 Rowan County picked at least two of its new commissioners Tuesday, while the third will have to wait as hundreds more ballots are counted.

Republicans Jim Greene and Greg Edds started out strong and cruised to victory as precinct results came in and votes piled up. Greene received the most votes at 19,451 or 18.67 percent of the total vote. Edds was second with 18,055 votes or 17.33 percent.

With three seats on the county board open, Republican Judy Klusman edged out former commissioner Raymond Coltrain, running as an unaffiliated candidate. But her 76-vote margin of victory needs to withstand a counting of provisional and absentee ballots, as well as a possible recount.

They’ll replace outgoing Republican commissioners Jim Sides, who lost in the GOP primary, Chad Mitchell, who ran unsuccessfully for the N.C. House of Representatives rather than seek re-election to the county board, and Jon Barber, who did not seek re-election.

“I think the people wanted a candidate or candidates that were going to bring some civility back to the commission,” Greene said. “I’ve got great respect for Greg’s ability and I think that he is going to make a great commissioner and that he has some great ideas. I’m very optimistic that we will work very well together.”

For both Edds and Greene, it’s their first time on the county Board of Commissioners. Edds said he believed a positive theme was an important part of his successful bid for county commissioner. Throughout the course of the race, he was accused of not labeling campaign material appropriately and other campaign violations by Super PAC La Resistance.

“I’m just really truly humbled and honored,” Edds said about his election. “My theme from the very start was positive leadership, and as things weren’t so positive, I was determined to remain so.”

Edds said he is happy to serve with Greene, who also happens to be Edds’ favorite candidate.

“Had I not won, I hoped that he would win and lead the ticket,” Edds said about Greene’s candidacy. “He understands relationships, respectful, calm and understands economic development, and those are all characteristics that we are sorely in need of right now.”

Two candidates with agriculture backgrounds were locked in a tight battle for the third open commissioner spot. One, Klusman, is a former farmer and Wisconsin state legislator. The other, Coltrain, previously was the Piedmont Research Station Superintendent and is currently an independent agriculture consultant.

Republican Klusman came in third with 12,980 votes — 12.46 percent of the vote. Coltrain came in fourth and therefore wasn’t elected according to Tuesday’s unofficial results.

“Raymond and I are friends, we go to church together and we’re both farm kids,” Klusman said. “It was going back and forth, and it was so close. I have the utmost respect for Raymond.”

Klusman said she joked with Coltrain that whoever lost would have his or her pick of a county committee to be appointed to.

Klusman and Coltrain are, however, close enough for a recount, according to Elections Director Nancy Evans.

Elections specialist Laura Russell said there are still many more ballots, not including absentee ballots, that have to be counted. Russell said 160 provisional ballots still are uncounted and 110 ballots were hand-delivered to the Rowan County Board of Elections on Tuesday. Historically, about a quarter of provisional ballots end up being counted in the election, Evans said.

“It’s really the first time we’ve had this many absentee ballots,” Evans said about political groups sending out mass mailers to request absentee ballots. “There’s probably going to be more than 200 absentee ballots to add to that total before it’s over with. I’m just estimating, but it could change things.”

One of the most significant issues in the race for county commissioner was the county’s ownership of the former Salisbury Mall. When asked how they would approach the issue once terms begin in December, Greene, Edds and Klusman all said the county should examine it’s options before making a decision.

Greene’s comments focused on whether the county should own the mall.

“The first thing that we have to do is to sit down and see if Rowan County needs the mall, if there’s any hope that we can use it for county services and, if that need is there, can we work out something with the city of Salisbury,” Greene said. “We’re going to need to find out how expensive that mall is to keep up and whether it makes economic sense for us to keep it. Especially the zoning and how we will be able to use it will be the driving force behind whether we keep that mall or try to sell it.”

Greene said he thinks the county should sell the mall if it can’t be used for government services.

In his comments about the mall, Edds said the commissioners could make an informed decision about how to proceed with ownership because a space needs study is scheduled to be complete at about the same time the new commissioners’ terms begin.

“We will have all of the information at our disposal that the general public wished other commissioners had before they bought it,” Edds said. “I believe that now that we own it, we have more of a responsibility to make a good decision than even before we bought it.”

Like Edds, Klusman focused on commissioners fully investigating all facets of the mall before moving forward.

“We own it, and I think that with a new group of commissioners coming on, we are going to take our time and do the due diligence that wasn’t done,” Klusman said. “There’s about 20 or 30 different things that people have suggested, and a lot of them are good suggestions. My one concern is to say this: I do not want a government entity undercutting the rental space price for our small business because I don’t know exactly what the rent is, but I know it’s been highly discounted.”