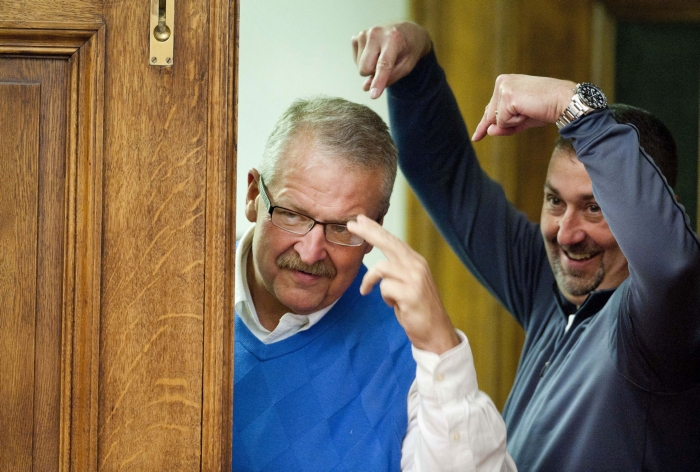 A month ago, Kevin Auten said he didn’t mind putting in the hard work, and it appears voters want him to continue doing just that. Auten was re-elected sheriff Tuesday night.

Auten said it was bittersweet, because in the last election his father was living and campaigned along with him. Auten’s father, Eugene, died in 2011. Auten said he came into the race having campaigned before, but said the hardest part of the campaign was balancing work, the campaign and his family life.

Auten, 53, is completing his first full term after winning the election in 2010. Before winning that election, he had served as interim sheriff, replacing then-retiring Sheriff George Wilhelm in November 2009.

Auten arrived at the county Board of Elections accompanied by family members including his mother, Becky, wife, Jennifer, and several deputies and detectives from his department.

Auten said he was appreciative of those who voted for him and for the people who didn’t vote for him, he’s just glad that they voted.

As for his opponent, Auten said he appreciated Eller running a “good, hard, clean race.”

Eller, 53, a farmer and owner of Eller Transport, said the race really “went just about the way I figured it would. I gave the citizens of Rowan County a choice.”

Eller said he is glad the election is over and he thanked God, his family and all of the people who supported him.

Eller sent his congratulations to Auten, adding that they both ran a good race.

“I respect him, and I think he respects me as well,” Eller said.

Eller said he thinks he did pretty well.

Eller ran unsuccessfully for sheriff in 2010 and county commissioner in 2012. He had hoped this election season would be different. Eller did not say whether he’ll make another bid for sheriff in four years.