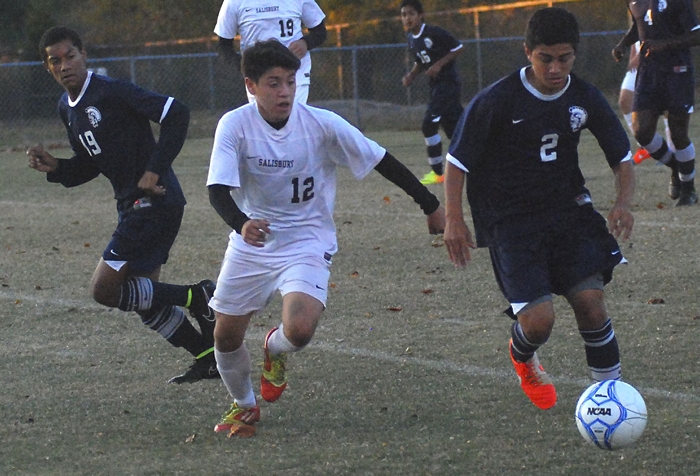 A corner kick in overtime set up No. 5 Salisbury’s 2-1 win in the second round of the N.C. High School Athletic Association 2A state playoffs.

After battling No. 12 Chase for more than 90 minutes, the ball bounced around the box. Chase could not get the ball cleared out of the box, and it went to Salisbury’s Andrew Kalogermitros. Kalogermitros fired it into the top-right corner of the net for the game winner with 3 minutes, 2 seconds left in the second of two five-minute, golden-goal overtimes.

“It was really tiring,” Kalogermitros said. “We had only a couple [of minutes] left before penalties. We had a corner. Josh [Lynch], our left back, told me that he had a better chance of getting a header than I do.

“The ball goes in, and I just stayed in there hoping and being optimistic that a ball would go back in. Our right mid Matt [Washko] hit it back in, and I just did what I could to get my foot on the ball.”

Kalogermitros, who ripped off his jersey in celebration, said he knew it the ball was good as soon it came off his foot and started its journey to the net.

The Hornets (20-4-0) travel to No. 4 Forbush (19-2-0) on Wednesday for the third round of the state playoffs. The winner of that advances to the state quarterfinals.

Coupled with Kalogermitros’ heroics was the performance of goalkeeper Arturo Ramirez. Ramirez had hard shots come his way through regulation and overtime only to keep coming up with the big save.

The most important came in the final minute of the first golden goal overtime. Jose Vasquez, who the Hornets focused on stopping all night, took a shot from the left side right to the goal. Ramirez dove to the ground and stopped the ball right in his stomach.

“It’s a quick reflex act any keeper should have if they want to be keeper,” Ramirez said. “…It was thanks to God. He helped me make the save and make it to the third round.”

Monday’s match was long and grueling. Salisbury, winner of the 2A state title in 2011 and 2013, looked flat at the beginning. It wasn’t until Salisbury defender Christian Uribe put Chase on the board with an own goal 26 minutes into the game that the Hornets started to be aggressive.

“It seems like there were segments of the match that we didn’t go wider than the circle or the arc,” head coach Matt Parrish said. “They were able to dominate when we did that. Then all of the sudden we’d string eight or nine passes together and march up and down the field from back to forward and forward to back and not have any problems.”

The Hornets got the equalizer with less than 15 minutes left in the game. Jamie Henriquez worked the ball past a pair of Chase defenders in the middle of the field and fired the ball off his left foot. The ball curved into the right side of the net to tie the game at 1.

The teams battled the rest of the way in regulation and through a pair of 10-minute overtimes to set up the drama of the sudden-death periods.

“It was a hard match, and you can be equal with anybody,” Ramirez said. “Any mistake can cost a match. We stood up, and we faced the other team strong, and that sent us to the third round.”