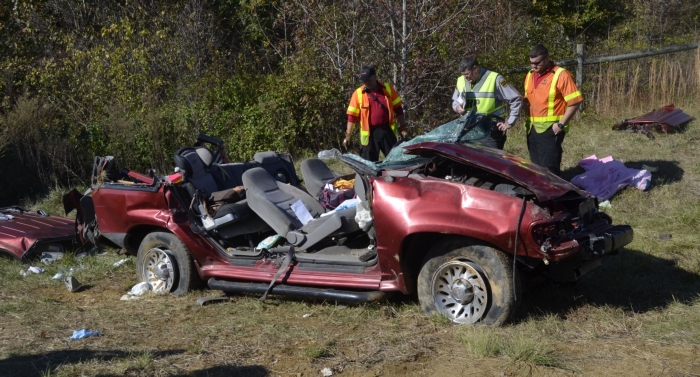 Emergency crews had to remove the roof and all four doors of this Ford Explorer Monday afternoon. Two adults and three children were involved in the single-vehicle crash that occurred between Spencer and Salisbury at mile marker 78 on the southbound side of Interstate 85. Shavonne Potts/Salisbury Post

Rescue crews had to remove the roof and all of the doors from a Ford Explorer involved in a Monday afternoon crash on the southbound side of Interstate 85. The crash occurred just before 1 p.m. between Spencer and Salisbury at mile marker 78.

Potts said there were three children — a 1-year-old boy, a 3-year-old boy and a 2-year-old girl — in the back seat and two adult women riding in the front. The driver, Shelby Jones, 45, of Lexington, was taken to the hospital and her daughter, Jessica Jones-Wall, 20, also of Lexington, was airlifted to Wake Forest Baptist Medical Center in Winston-Salem with serious injuries.

Jones-Wall is 30 weeks pregnant, Potts said, and did have a broken leg.

Two of the children were in child safety seats and the 3-year-old was in a booster seat in the middle. All appeared to be wearing their seat belts, he said. The children were all taken to the hospital.

Potts said there was another child safety seat in the vehicle. He said children who ride in booster seats must either be 8 years old or 80 pounds.

The 1-year-old boy and the 2-year-old girl were the children of Jones-Wall. The other child was the grandson of Shelby Jones.

Potts said at this point it is unclear what made the driver lose control of the vehicle. He added that neither alcohol nor speed were factors. Jones was not believed to have been texting, he said.

She told the trooper while at the hospital she was driving in the far right lane and was sideswiped by a white truck. Jones said she was hit by the truck and then the next thing she knew her face hit the ground.

Potts said witnesses at the scene told him Jones was on the left-hand side in the second lane, not the far right.

Witnesses also said there were no vehicles near Jones when her vehicle began swerving. A witness told the trooper they saw the left front tire “wobbling” before the SUV overturned.

Although Jones did not maintain lane control, Potts said, she’s not being charged.