Sewage sludge: Is it safe? 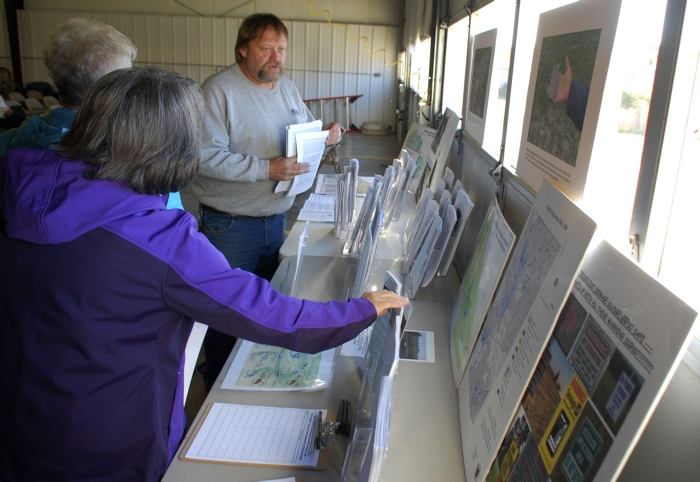 Mark Wineka/Salisbury Post Danny Knight, who lives on Old Beatty Ford Road next to acreage proposed for the land application of sewer sludge from Charlotte-Mecklenbur Utilities, picks up some of the hand-out information in Gold Hill Sunday.

GOLD HILL — Danny and Angela Knight live on Old Beatty Ford Road next to acreage proposed for the land application of sewer sludge from the Charlotte-Mecklenburg Utilities Department.

They don’t want it, because they are fearful the biosolids could contaminate nearby streams and be harmful to groundwater, poisonous to breathe and uncomfortable to smell.

The Knights also have concerns that Shive Elementary School is about a half-mile from the proposed site, as the crow flies.

Attending a community meeting Sunday at the Gold Hill Fire Department, Angela Knight asked how individuals could fight large companies and big government who are responsible for spreading the sludge.

“Me, as an individual, I’m not big enough,” Angela Knight said. “Nobody wants this next to their place. … I don’t want it there.”

Synagro, which handles CMUD’s land application program, has applied for numerous permits from the N.C. Division of Water Quality to spread biosolids from the waste treatment process on farmland in Rowan, Cabarrus, Stanly, Anson and Iredell counties.

The permits have yet to be approved, according to Dr. Lance Riley, who organized Sunday’s meeting, and state Rep. Larry Pittman, R-Cabarrus, has requested that the N.C. Department of Environment and Natural Resources hold a public hearing before they are.

“We’re in the sweet spot now where nothing’s going on,” Riley told about 75 people from Rowan and neighboring counties. “Let’s keep it that way.”

Representatives from CMUD and Synagro have scheduled a community meeting themselves to explain the proposed land application program. That meeting will be held at 4 p.m. Sunday at St. Stephens Lutheran Church.

While utilities pay companies such as Synagro to take it, the sludge is usually given to farmers free of charge or at much cheaper rates to be used as fertilizer rich in nitrogen and phosphorus.

But some scientists such as Riley contend the sewage sludge contains disease-causing microbes for 18 human viruses, 19 parasites and 31 bacteria, such as Salmonella, E. coli and MRSA.

“Rise up and demand a change,” Dotson said. “Demand that we not be poisoned. … Schools, nursing homes — if they have sludge around them, raise hell. You just don’t want this in your neighborhood.”

Pittman said he spoke with someone in the Department of Environment and Natural Resources and was told county commissioners could impose a moratorium on the sludge application for six months to a year, after a public hearing.

Commissioners also could impose restrictions so that no sludge could be brought in from other counties, Pittman said.

If commissioners would not take up their cause, Pitt-man told the group, they could look to legislators in Raleigh.

“I’m already looking at that,” he said. “I certainly need to know more about this. If I get re-elected, I’ll be on it.”

State Sen. Fletcher Hartsell, R-Cabarrus, also attended the Gold Hill meeting. At a minimum, he said, the utilities creating the biosolids need to look at different methods for handling it. Cabarrus County, he noted, has an incinerator to burn the biosolids, and he wondered why CMUD doesn’t have its own.

“The question is, what’s the safest and best way to dispose of it?” Hartsell said.

For now, Riley said, an incinerator is the best available technology for disposing of sewage sludge, The residue left from burning it then needs to go to a totally sealed landfill, he said.

He called land application of the sludge archaic.

Barbara Sifford, an experienced waste treatment plant operator who used to work for Salisbury-Rowan Utilities and now is employed by DENR, said the land application process is safe when done correctly and that soils are tested annually.

For years, dewatered sludge from Salisbury-Rowan Utilities and elsewhere has been land-applied, she noted.

“It has been done and can be done safely,” she added.

On its website, CMUD says “biosolids are the safe, nutrient-rich organic materials resulting from treatment of domestic sewage at a wastewater treatment facility.” Some 78 percent of CMUD’s biosolids were land applied in past years, according to CMUD.

“Recycling biosolids is good for the environment,” CMUD says. “Organic matter has been recycled for centuries to improve soil fertility and productivity.” It adds that biosolids recycling is regulated and encouraged by the U.S. Environmental Protection Agency, state and local authorities.

Riley, Dotson and many others in the room Sunday disagreed.

Riley claimed PCBs, many heavy metals, industrial chemicals, pathogens, viruses and other harmful chemicals end up going into well water and also make their way to streams, rivers and wildlife.

Some of the harmful chemicals are absorbed by plants and consumed by livestock, which make their way into the human diet, Riley added.

Sewage sludge has 27 heavy metals, but only nine are tested for, Dotson said.

“The trouble is they accumulate in the soil, and they don’t go away,” she said. “… This stuff is poison. What sewage sludge is is everything that goes down the drain. It comes to the public in lots of different ways.”

Dotson said “biosolids” is an euphemism created by the industry profiting from it. Corporations and government have kept sewage sludge’s dangers secret from the general public for 30 to 40 years, Dotson said.

Just by seeing Sunday’s film and hearing the discussion, people in the audience know more about sewage sludge than many environmental professors with Ph.Ds Dotson said.

Riley said he has spoken at a Charlotte City Council meeting about his concerns and also has made numerous Freedom of Information Act requests to the city and CMUD for various documents.

Mecklenburg County, where the sludge would be coming from, ranks 43rd and has 471 acres permitted for land application.

“Charlotte says this is safe,” Riley said. “This is not safe.”

History show and sell: Antiques extravaganza will feature many…