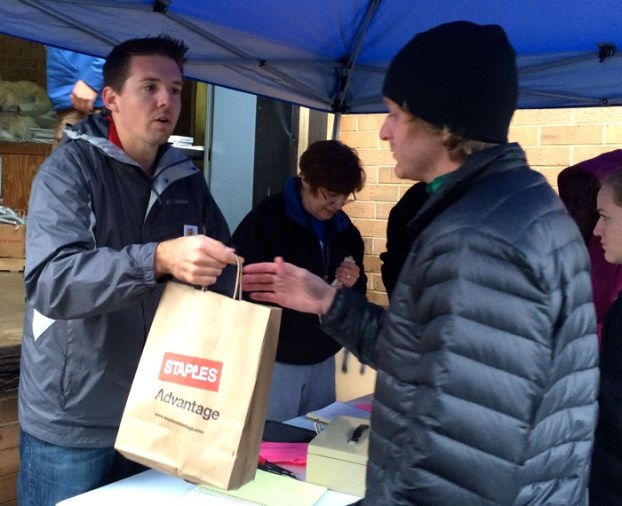 Despite wind, rain and cold temperatures, the Rowan-Salisbury School System sold $157,000 worth of used Apple laptops, iPads, iPods and desktop computers to the public Saturday.

“We were really pleased,” said Director of Digital Innovation Andrew Smith. “For it being so nasty outside, people were really cordial.”

Angie Bumgardner and her daughter, Nicole Beaver, made a point to make it out to Saturday’s sale. Bumgardner is a Koontz Elementary employee, but she was unable to make it to Monday’s first-look sale for district employees.

Bumgardner said the laptops she bought were identical to the one she had for school use before the new laptops were deployed and that she really liked those.

“I would prefer Apple over any other computers,” Beaver added.

“This was an opportunity for some of our community members to have really nice products,” Smith said.

Smith said the iPads and unibody MacBooks were the best selling items. They ran out of both by midmorning.

The technology department is selling the gently used devices as the district’s schools implement a one-to-one digital conversion. By the end of the school year, all teachers and students in third through 12th grade will have an iPad or a MacBook Air to use at home and school throughout the school year.

As these devices are rolled out in the schools, the outdated or unnecessary ones are removed. Those purchased with local funds are wiped and reset to factory settings, and then sold.

District employees bought $137,000 in tech items at the first-look sale Monday, bringing total proceeds to nearly $300,000. The money goes toward the lease for new devices.

Smith said the district is going through the rollout in its middle schools now. He expects there will be another large sale in the spring.

When runners in Patterson Farm’s first Dewey Dash rounded the last bend in the 3.1-mile course their clothes were no... read more