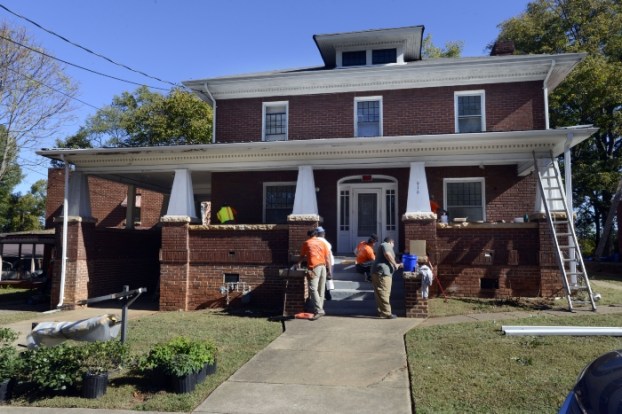 Blockwork volunteers spiff up the 1924 Hercules Smith House, which once served as a hospital. Photo by Wayne Hinshaw, for the Salisbury Post

Hercules and the hospital on Horah

SALISBURY — A week ago when close to 100 volunteers swarmed up and down the 900 block of West Horah Street for BlockWork, sprucing up all the properties, a lot of conversation focused on one house and the building beside it.

The general consensus was that the smaller, two-story structure — set well off the street and overshadowed by the main house at 916 W. Horah — was once a hospital serving the African-American neighborhood around Livingstone College.

Longtime residents in the neighborhood didn’t know when it had served as a hospital — only that it had been a medical facility for a short time and long before their own childhoods. As for the big house, one of the larger residences in the entire West End, the old-timers recalled its more resplendent days when it seemed like a mansion for Bishop Jones and his wife, who entertained there often.

The workday discussion served as a good reminder of how history fades with obituaries and memory and how you have to return — as historian Betty Dan Spencer often does — to resources such as the Census from years past, birth and death records, newspaper reports, Sanborn maps, city directories and reliable histories, such as Louise Rountree’s “Chronological History of Black Salisbury-Rowan.”

Spencer looked into the properties and concluded, with the help of Rountree’s history, that it was the roomy brick house at 916 W. Horah St. which actually had served as a hospital for African Americans and only for a short time — basically, 1931.

The large residence is identified as the 1924 Hercules Smith House, and Spencer describes it as “the only Salisbury hospital exclusively for African Americans.”

Hercules (Spencer notes his tombstone says “Hurclese”) Smith was born in South Carolina June 15, 1870, and died in Salisbury May 28, 1944. He married Lula Sujette Harris, a Georgia native, who died in Salisbury Dec. 9, 1947.

They were married around 1895, according to a 1900 Census from Richland County, S.C. They both taught school, and Hercules was a Census enumerator, a pretty important position for a black man around the turn of the century.

Spencer doesn’t know exactly when they moved to Salisbury, but the couple are listed in the 1907-08 city directory, which said they lived on “West Horah near Institute.”

Hercules Smith and Walter Gant were partners in a “tonsorial establishment,” Smith & Gant, located at 123 E. Innes St., according to Spencer. “Tonsorial” is an older word referring to a barbershop.

Spencer says Hercules and Lula Smith had six children, but only two were living in 1910. They also adopted a son, Alvah Randall, and a daughter, Carrie Randall. Their early Salisbury address was given as 912 W. Horah St., and as the years passed, Hercules owned his own barber shop, the Excelsior, at 126 N. Lee St.

He also was known as a minister. The inscription in the front, concrete steps of his 1924 house notes it belonged to “Rev. H. Smith.”

With the construction of the 1924 house, the Smiths’ address changed to 916 W. Horah St.

“There is no indication that the Smiths moved out of their home when it became designated as a hospital in 1931,” Spencer says, though she wishes there were a 1931 city directory to confirm that.

“It was their residence when they died,” she adds.

In her research, Spencer found a Salisbury Evening Post article from Feb. 28, 1931, under the headline “Negro Hospital Is Established in Salisbury,” with a subhead noting its location as West Horah Street.

The article itself confirmed that Salisbury would have a “colored hospital” in the home of Hercules Smith at 916 W. Horah St. It formally opened that same day, Feb. 28, and the newspaper said “the public, white and colored,” was invited to visit anytime between noon and 10 that night.

Nina Littlejohn of Spartanburg, S.C., was identified as the new hospital’s superintendent, bringing with her 17 years of experience in “hospitalization.”

“She was one of the leaders in bringing about the establishment of this colored hospital in Salisbury,” the Evening Post said. “It was further made possible by Hercules Smith and his wife, who made possible the use of their home for this purpose.”

The Rev. W.A. Tutt, pastor of First Calvary Baptist Church, was listed as president of the hospital association, and the Rev. S.J. Howie, pastor of Soldiers Memorial AME Zion, was secretary.

“The institution will be open to all doctors, white and colored, for the admittance of colored patients, and will be operated along the lines of similar institutions where patients are admitted for treatment by their own physicians,” the story said.

The article also described the Smith home as “a large, brick-veneer building with steam heat, water, gas, electricity and modern in every way.” It also provided 12 to 14 rooms and a spacious sleeping porch.

The Evening Post said, “numbers of leading colored citizens of this community” had been meeting for weeks to form an organization and establish the hospital. Notices had been sent “to all of the colored churches of the city and vicinity,” detailing the plans for the hospital and seeking their support.

What happened from there is a great mystery, though Spencer found evidence, in a Nov. 2, 1931, Evening Post article that the “local colored Elk Lodge” was launching a $300 drive for charity, and one of the first functions scheduled was a charity ball aimed at raising money for the “Goler Memorial Hospital” on West Horah Street.

As for the smaller building next to the Hercules Smith House at 916 W. Horah St., it first shows up on the 1931-1950 Sanborn Map. Could it have been a barber shop?

The Hercules Smith House is a boarding house today, and the smaller building looks as though it’s being used for storage.

Louise Rountree’s history also lists some of the black physicians who practiced in Rowan County. It’s difficult to determine which ones might have been associated with the hospital on West Horah Street.Black doctors practicing in that era would have included men such as William Albert Coleman and E.S. Portis.

Rowan Memorial Hospital didn’t come along until 1936, but a movement already was underway in 1932 when citizens organized Rowan General Hospital Inc., a non-profit organization with a nine-member board of trustees.

Those trustees leased the 60-bed Whitehead-Stokes Sanatorium at Fulton and Liberty streets and were able to qualify for funding from the Duke Endowment for help with patient care.

But the Depression made things difficult. In 1934, Salisbury native Burton Craige, living in Winston-Salem, told Dr. J. Ernest Stokes he wanted to see a hospital in Salisbury and was willing to make a big contribution.

The fundraising that followed was buoyed by a gift from the Duke Foundation. The effort also solicited gifts in the form of memorials to lost loved ones — hence the name “Rowan Memorial Hospital” for the new facility that opened in 1936.

Today’s Novant Health Rowan Medical Center grew, of course, out of the 1936 hospital. Surely, if the medical center had a family tree, somewhere there would be a branch for Hercules Smith and the little hospital on Horah.

SALISBURY — You meet someone like Jo Ponds, and you wonder how she did it. Ponds raised a house full... read more