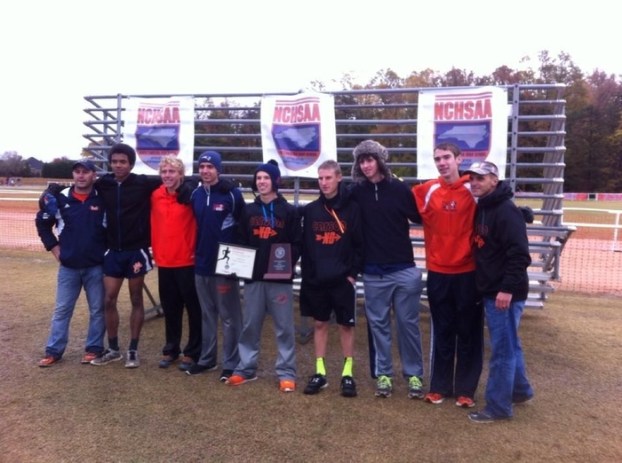 Kernersville’s Ivey Redmon Park was no place for the timid, but Carson’s cross country runners thrived in a difficult environment.

The NCHSAA championships were conducted like it was business as usual on Saturday, despite daunting weather conditions. Carson’s seven runners competed in the 3A race that kicked off a long day.

“It was pouring, it was muddy, the course was flooded, water was ankle-deep, and we were running into headwinds of 15 to 20 mph,” Carson coach Robert Marchinko said. “It was a guts race.”

“The times weren’t going to be fantastic in those conditions and some kids that usually break 16 minutes didn’t today,” Coach Marchinko said. “But Zach ran a great race. He had the third-fastest time all day.”

Coach Marchinko said the Cougars were mentally prepared for what they were getting into.

“We’d prepared for very tough conditions,” he said. “We looked at the weather as an advantage for us. We played up the weather as a positive, and our guys embraced that.”

Zachary Marchinko qualified for the 3A state meet as a freshman and ran the fastest freshman time of 16:38. He took a small step back as a sophomore, placing 53rd in the state meet in 16:55, but that was mostly due to a sinus infection.

Marchinko regained confidence with a fourth in the 3200 in the 3A indoor track meet in Winston-Salem in February and followed that up with a strong outdoor track season last spring.

For both Marchinkos, the father/son, coach/son relationship has its challenges, but also its rewards.

“You try to find that right balance of being Zach’s dad and being Zach’s coach,” Marchinko said, “Right now, I’m just very proud of him and the race he ran today.”

Coach Marchinko said he has a tight bond with his current team. It’s a junior team, guys who grew up as Zachary’s friends as well as his teammates. Garrett Ingold, Carson’s second-fastest runner and a fourth-place finisher in the South Piedmont Conference meet, lives on the same street as the Marchinkos, as does promising sophomore Grant Doby.

“Ingold had a great year and he’s a guy who used to run 21s and now he’s running 16:40s,” Coach Marchinko said. “Cox is an outstanding track guy (SPC champ at 400 meters), but he’s surprised people by running 17s in this sport. Kimball and Koontz, I knew they had it in them, and they came through today. Evans was all-conference and all-county as a freshman and has a bright future. He and Doby have bright futures.”

Carson competes in the SPC — the state’s deepest 3A conference. Carson also competes in the Midwest Region when it’s time to qualify for the state meet, and that’s definitely the deepest region.

“This season was a big breakthrough for our program,” Coach Marchinko said. “To win the county and conference was big and to make it to the state as a team for the first time was a goal we’d had since back in the summer. We wanted to go to the state and beat some people, and we did that.”

TYRO — It was raining so hard, Salisbury defensive back Darius Jackson was struggling to see, much less talk, but... read more