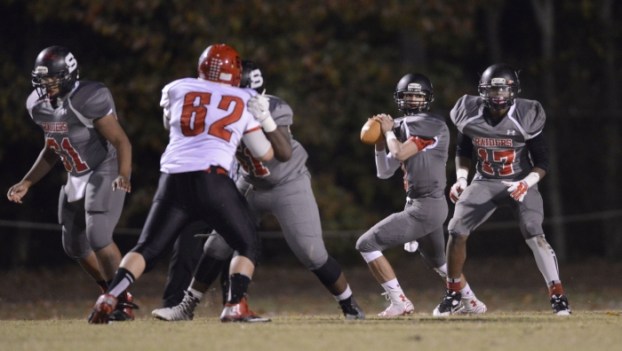 South's Aaron Kennerly #3 looks down field for a receiver. photo by Wayne Hinshaw, for the Salisbury Post

LANDIS — South Rowan overcame a lot of obstacles Friday night including a highly deceptive Central Davidson offense and a driving rain. But they ultimately fell victim to their own miscues.

The Raiders (2-8) coughed up three fumbles and two interceptions that all directly contributed to their 20-7 non-conference loss to the Spartans on Senior Night at Donnell Stadium.

A driving rain hit the stadium midway in the second half then a bolt of lightning caused a one hour suspension. By then, however, South had already put themselves in a deep hole and would not recover.

The two teams battled to a 7-7 halftime tie thanks to a clutch 29 yard scoring pass from South’s Aaron Kennerly to Alex Helms. The pass over the middle was caught by Helms at the 10 and he weaved through the defense to score as the  horn sounded to end the half.

Any momentum South enjoyed was snuffed out to start the second half when they fumbled on the first play near midfield. Running their befuddling and deceptive double-wing offense, the Spartans (3-7) pounded 44 yards in eight plays to take the lead for good. Halfback Perry Roach scored from the one at 8:39 of the third period to make the score 14-7.

“We haven’t generated a lot of turnovers this season,” Central Coach Chad Tedder said. “So to get that one to start the second half was huge for us.”

Tedder, who coached at East Rowan in 2010 and 2011, has beaten South four times in a row, twice at each school.

Roach, a 165-pound senior, was a workhorse for the Spartans with 31 carries for 156 yards and all three  of his team’s touchdowns. He scored from the nine in the second quarter after the first South fumble produced a 7-0 lead.

South seemed to have a decent drive going in the fourth quarter, down 14-7, as they reached midfield. But the rain had started pouring by then  and yet another fumble turned it over at the South 40. A personal foul penalty moved the ball to the 25.

The Spartans then sprang a rare and unexpected pass play on the Raiders to put the game out of reach. Quarterback Greg Brown found Roach wide open over the middle for a 23 yard TD pass. The PAT missed but the damage was done.

The lightning delay came with 4:32 left just after Central’s Evan Stovall picked off Kennerly deep in Raider territory. After a one hour delay the teams came back out to finish it up. The Spartans drove down to the Raider two but a couple of penalties and a kneel down ended the game.

South’s offensive woes continued as they were held to just 89 yards rushing and under 100 yards of total offense in the second half.

They close their season next Friday at East Rowan.