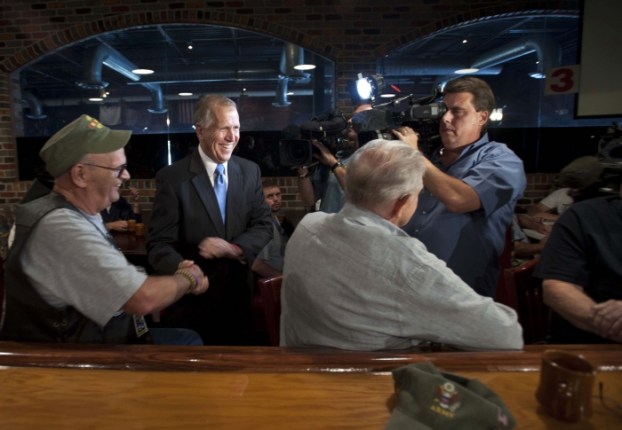 Republican U.S. Senate Candidate Thom Tillis doubled up on his visits to Rowan County this week.

On Tuesday, Tillis visited the former Salisbury Mall — now West End Plaza — to talk to veterans just after a weekly coffee event. Then, he returned on Friday to visit the Republican Headquarters in downtown Salisbury. Tillis is in the midst of one of the closest and most important U.S. Senate races in the country against incumbent Democrat Kay Hagan. With just a few days until election day, more than $100 million has been spent in the race.

“If you look at the historic trends, Rowan County tends to be in the heart of this Republican swath of territory,” Bitzer said. “Democrats have really centered their base in urban areas and become less dependent on rural counties, unless its a traditional moderate to conservative running. I’m not surprised that Hagan is focusing on the urban counties.”

Hudson said that Tillis’ two appearances show how important Rowan is to him in his bid for U.S. Senate.

“I’ve been campaigning for Thom Tillis across the 8th District and across the state the past few weeks, and I can tell you he has all the momentum,” Hudson said in a statement. “I was proud to welcome Tillis to Rowan County twice this week. The fact that Tillis has been here this much shows how important this area is to him and speaks to the level of representation folks here can expect from a Senator Thom Tillis.”

On Monday, all candidates for local and state races turned in campaign finance reports for the third quarter.

Spending more money than competitors doesn’t equal a victory, but several trends in spending could affect the end result of the county commissioner candidates’ race.

By far, Republican commissioner candidate Judy Klusman has raised the most money, most of which is her own personal funds. Her campaign committee has received oodles of money — $27,100 of which is her own. If money was all that mattered in the race, Klusman would win by a mile.

But over the course of the whole race, unaffiliated candidate Raymond Coltrain isn’t far behind Edds. Coltrain is officially just under $1,000 behind Edds during the election, which is may be surprising to some because Coltrain isn’t affiliated with a political party this time around. It doesn’t make his fundraising any less impressive, but Coltrain was previously a commissioner and, therefore, has significant name recognition already.

Of the eight candidates for county commissioner, the top three in total receipts over the whole campaign include: