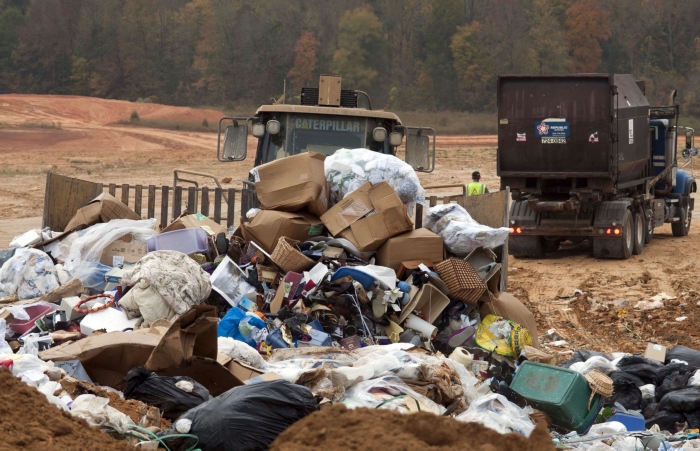 JON C. LAKEY / SALISBURY POST A compactor works in current open section of the Rowan County landfill. Opened in 1989, the landfill has two completed sections and the third is over 90 percent completed. Current construction on the fourth phase is occurring nearby. Wednesday, October 29, 2014, in Woodleaf, N.C.

A multi-million dollar operation, perhaps Rowan County’s most important, is in the midst of a massive renovation that is expected to extend the lifespan of a decades old facility by about 10 years.

To an average Rowan County resident, the renovation may look like a 20-acre hole in the ground. To the Rowan County landfill, it represents about $4 million per year in income, if tonnage rates stay the same.

On June 17, county commissioners approved a $5.95 million contract with JT Russell and Sons to build the fourth cell — where trash is stored — of nine at the Rowan County Landfill. Currently, the landfill is near capacity. By the time, JT Russell and Sons finishes construction, Rowan County Environmental Services Director Kathryn Jolly expects the third cell to be 99 percent full, which it’s a few percentage points away from now.

“What we do represents an essential service to our citizens, so it’s an ongoing service that the county has to provide its citizens,” said Environmental Compliance Specialist Greg Greene. “If we don’t do this then the cost of their garbage disposal is going to quite possibly go up because it’s going to have to be trucked out of the county.”

Construction on the fourth cell is expected to be finished by spring 2015, but work recently hit a one- acre snag. After discovering a chunk of rock earlier in the excavation process, JT Russell drilled 40 holes over a 1.2 acre area in the 20-acre cell and found that about 10,700 cubic yards of rock needed to be removed, according to county documents. If the rock wasn’t removed, the county would’ve lost about $2.2 million in potential revenue, the documents stated.

The county commissioners easily approved a change work order, withdrawing money from a $500,000 contingency fund included in the contract.

“So, my understanding is by spending $200,000 we can save $2 million?” said board of commissioners vice-chairman Craig Pierce at the time. “That’s pretty easy math.”

Greene said portions of the rock could be removed by machine but other portions would require explosives. Greene and Landfill Supervisor Jeff Boyd said none of the other cells have contained as much rock as the current construction project encountered.

Jolly said the fourth cell was paid for all with money saved up through revenue, by annually saving portions of the money that comes in through the landfill. Revenue from the landfill actually stays within its department and doesn’t fund other areas of county government. Built in the 1980s, Jolly and Greene both said the landfill could last 100 years or longer at current tonnage rates and if each of the nine planned 20-acre cells last 10 years. The cells are planned to be built in two parallel lines, which leaves a small dip in the middle. By filling the middle, Jolly said the landfill’s life could be greater than 100 years.

“It’s like filling up a bucket,” Greene said about determining when a cell is full. “We know when it’s half full, three quarters full and we know about how long it’s going to take to fill it up.”

Jim Sides, chairman of the county’s board of commissioners, called the landfill an efficient, well-oiled machine.

“We just have a good operation and we want it to last a lot of years,” Sides said.

One reason to ensure the Rowan County landfill lasts is because of any legal battles that might coincide with purchasing a new piece of property, Sides said.

“I don’t know anything about building landfills, but I know one thing — you don’t want to buy riverfront property — so it’s got to be in a certain location,” he said. “You don’t want to buy 10 acres; you’ve got to buy 300 or 400. And, there aren’t that many large tracts like that left in Rowan County. Where would we build the next landfill?”

Sides said an increase in tonnage from outside counties would decrease the life of the landfill.

“The state looks at our landfill all the time and we’re afraid that at some point they’re going to come in and force us to take garbage from somewhere else,” Sides said. “We don’t want ours to become a regional landfill.”