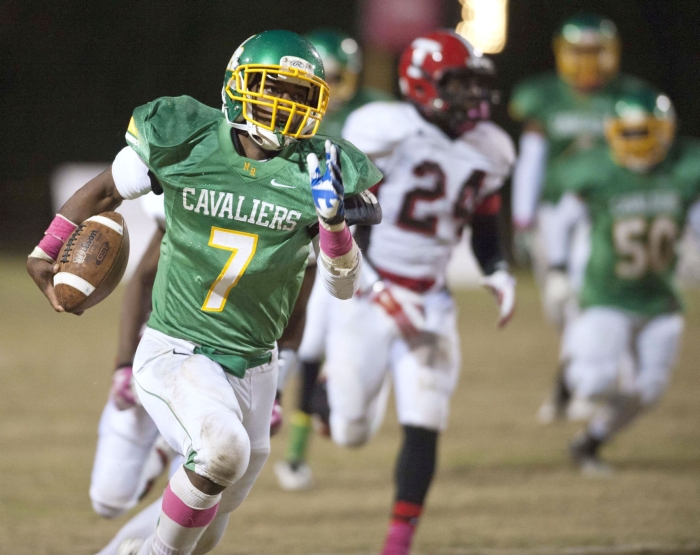 The Cavaliers finished off a perfect month by finishing off visiting Thomasville 31-13 on Friday.

“This is not the same team as last year,” defensive lineman Shane Parker said after North (8-2, 4-0 CCC) pocketed its sixth consecutive win. “But it’s doing the job for us. And now we’re ready.”

The victory came with the union label attached. North had to roll up its sleeves and get to work  following a lackluster first half.

“We’ve started off slow a few times,” said wideout Shareef Walker. “We just had to get on the same page — and tonight that took a series or two.”

North was fortunate to jog into its locker room with a 14-13 halftime lead. Touchdowns by Walker and quarterback Alexis Archie provided the Cavs’ scoring, but Thomasville (2-8, 1-3) used a couple of big plays to stay in the game. Running back Ja’hare Taylor-Thomas busted an early 71-yard touchdown run that opened the scoring and temporarily quieted the lively Senior Night crowd.

“You never want to give up a kickoff return for a score right after a touchdown,” said NR coach Joe Nixon. “That was a big momentum play for them.”

It was until Archie  navigated the Cavs downfield on their next possession. A key play was his 51-yard completion to sophomore Alonzo Sirleaf to the THS 5. Two snaps later Archie followed his blockers on a short TD run.

“Most of the time it was just seeing how the defense was playing us,” Archie said after passing for 121 yards and two touchdowns — despite spending the first quarter on the frozen food aisle. “The didn’t use a safety on every play and that left a lot of guys open.”

Thomasville squandered a chance to take the lead in the waning seconds of the first half. Quarterback Jalen Jenkins steered the Bulldogs to the North 1-yard line when time expired.

“We thought (Taylor-Thomas) was in on that last play,” said losing coach Wes Mattera. “All my coaches said so. We were out of timeouts with 20 seconds left, but there’s no excuse why that ball wasn’t spotted up so we could spike it and run another play.”

Thomasville never recovered from the blunder. North padded its lead when freshman kicker Jacob Young booted a 35-yard field midway through the third quarter. Later senior Jareke Chambers (22 carries/175 yards), who’d been bottled up in the early going, picked up blocks from Malik McGee and Jim Herndon and sprung free on a 52-yard TD that gave the Cavs a 24-13 lead.

“They had a good game-plan for us,” Chambers said. “They stopped me from running inside. The holes were there for some. But I missed some and some I couldn’t even get to.”

That’s because THS had Appalachian State commit Akeem Davis stalking around the secondary.

“They’ve got a D-I linebacker with multiple offers,” Nixon said. “He’s a special football player. But we kept running Jareke right into him thinking eventually he would break one — and he did.”