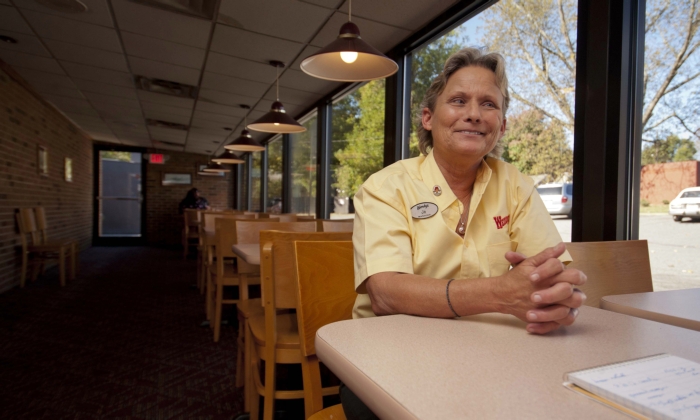 JON C. LAKEY / SALISBURY POST Jo Ponds, shift supervisor at the Wendy's restaurant on East Innes Street, has been working at the same location for 35 years.

SALISBURY — You meet someone like Jo Ponds, and you wonder how she did it.

Ponds raised a house full of boys — four of them, not counting husband Sy — and worked these past 35 years in the hectic world of fast food.

More to the point: Ponds has worked for Wendy’s since 1979, and except for some brief periods at Wendy’s restaurants in Albemarle or on Jake Alexander Boulevard, she has been a fixture at the East Innes Street Wendy’s.

General Manager Rodney Curlee describes Ponds, a longtime shift supervisor, as his right-hand person and uses words such as “dependable” and “dedicated” when he speaks of her.

“I think everybody should work fast-food for a short while,” Ponds says. “It really is hard work.”

The East Innes Street Wendy’s, which opened in 1976, will close after Nov. 3 for eight to 12 weeks while the old restaurant is torn down and replaced with a new Wendy’s.

During the construction, Carolina Restaurant Group will send Ponds over to its Jake Alexander Boulevard location for some hours.

But the company also will give Ponds days to be home with her mother, Judith Sides, who is coping with Alzheimer’s disease. Ponds becomes a little emotional when she talks about her mother and her work ethic — how she held down five jobs and still made time for her three children.

The motherly instincts and work ethic translated to Ponds, who for two of her four pregnancies was working at Wendy’s the same day those sons were delivered. The other two boys had set delivery dates, and Ponds worked the day before each of them was born.

Ponds shrugs and says she has been working since she was 8 years old. Growing up in Spencer as one of three children, she did a lot of baby-sitting, mowing lawns and cleaning homes.

Jo graduated from North Rowan in 1979, and her first job at Wendy’s was a two-hour shift, from noon to 2 p.m. during the summer.

Ponds actually thought she would like to pursue a career as a probation officer or in juvenile counseling.

“This really wasn’t what I had planned to do,” Ponds says, sitting for a spell in the Wendy’s dining room. “It was a just a stopping place.”

But the restaurant kept giving her more hours and little promotions along the way. As with most of the young help, she started tending the fries, graduated to making sandwiches and working the grill, then moved on to the cash register.

Over time, she became a crew leader, crew trainer and shift supervisor, which is where she wanted to stop as she raised her family.

Joe and Sy Ponds, pastor for Providence Baptist Church, married when she was 20, and Jo just kept on working for Wendy’s.

“The fast pace is what I like the most about it,” she says. “I’m just not one to stand around.”

All of Sy and Jo’s sons are grown now. Their youngest, Luke, is a junior at the University of North Carolina at Chapel Hill. The other boys are Christopher, Kendall and Joseph, and she has three grandchildren, including a granddaughter.

Three of the Ponds boys actually worked for their shift-supervisor mother at Wendy’s. Jo thinks it was good “to let them see how hard I do work.”

Years ago, Ponds was her company’s first shift supervisor at a time Wendy’s as a corporation was trying out the new position. “I had to do a good job,” she says.

Ponds says she has worked for some “really terrific mentors” through the years. She still hears the voice in her ears of one particularly good area director.

There are two rules Ponds has tried to follow:

Rule No. 1: The customer is always right.

Ponds is a bit embarrassed she can’t regale visitors with a lot of stories about working at a fast-food restaurant for so long. Her most famous customer, she says, was probably former pro basketball star Charles Barkley, who went through the drive-through.

Her favorite memory maybe happened about a year ago.

She was out in the parking lot when a handsome man in a nice suit and car yelled to her, “Hey, Jo!”

Ponds doesn’t remember his name, but the man said she had hired and trained him as a 16-year-old. Seeing her work ethic steered him away from making some bad decisions, the man said. He had just stopped to thank her.

“When you hear something like that, boy, it does you good,” she says. “I would like to think I’ve influenced a few people along the way.”

Ponds says she knows many of her customers by their faces only and what they like to order. It makes her feel a bit sheepish when they see her someplace other than Wendy’s and call out her name.

“I feel like God blessed me with this job,” Ponds says, “and it’s my responsibility to do the best I can.”