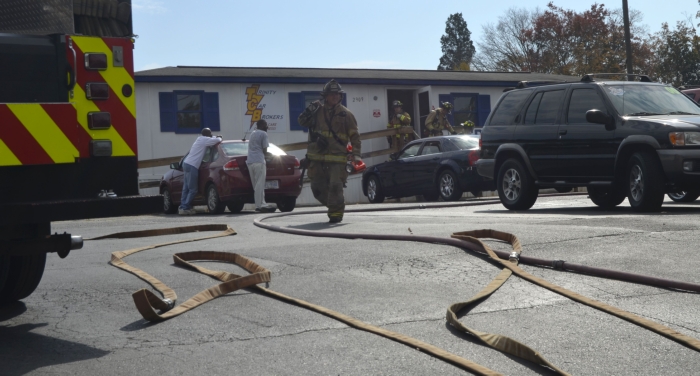 Multiple fire departments respond Wednesday to a fire at Trinity Car Brokers, 2909 S. Main St., where employees and the owner called in a fire that originated under the modular structure. Employees were able to put out the majority of the fire with a fire extinguisher and a garden hose. Shavonne Potts/Salisbury Post

Employees and the owner of Trinity Car Brokers were able to partially put out a Wednesday morning fire that started under the modular structure, located at 2909 S. Main St.

No one was injured at the car dealership, which is located across the street from Lazy 5 Veterinary Hospital.

A cause has not been determined, fire officials said at the scene.

The fire was called in by employees at 11:51 a.m. They reported seeing flames and smoke coming from the floor area, said Salisbury Fire Battalion Chief David Morris.

Morris said employees doused the fire with a garden hose and fire extinguisher. But firefighters from Salisbury City, Locke and Granite Quarry Fire departments took precautions as they continued to extinguish the fire.

The fire was contained to the building, but firefighters did remove a wall and part of a deck.

There were some charred areas in the flooring, Morris said.

He commended the employees and owner for their efforts at putting out the fire and the various fire departments who responded.