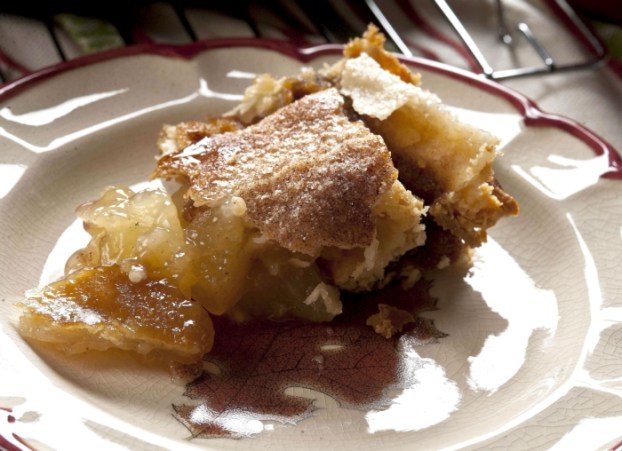 Recipes — Gettin’ down to the core of the matter

• One 21-ounce can apple pie filling

For the skillet apple pie: Preheat the oven to 400 degrees F.

Melt the butter in a 9-inch cast-iron skillet; set aside 1 tablespoon of the melted butter for the top crust. To the melted butter, add the brown sugar and melt them together on medium heat, about 2 minutes. Remove from the heat and line the skillet with one of the pie crusts. Pour the apple pie filling over the crust and sprinkle with 1 tablespoon of the cinnamon sugar. Use the second pie crust to cover the filling. Brush the top with the reserved melted butter, then evenly sprinkle the remaining 1 tablespoon cinnamon sugar on top. Cut vents in the middle of the pie. Bake for 30 minutes. Serve hot, topped with a generous dollop of cinnamon whipped cream.

For the cinnamon whipped cream: Chill a large metal mixing bowl and a wire beater attachment in the freezer for about 20 minutes. Pour the cream, cinnamon and sugar into the cold mixing bowl and beat until soft peaks form, 2 to 3 minutes; the mixture should hold its shape when dropped from a spoon. Don’t overbeat or you’ll have sweetened butter!

Editor’s note: Try this with vanilla ice cream instead of whipped cream. And do serve hot, or the caramel in the bottom solidifies.

• 1 to 11/2 pounds Kielbasa or other smoked sausage

• Salt and pepper to taste

Drain juice from sauerkraut, Place one-third of the sauerkraut in a slow cooker.

This is an approximate family recipe. Much of it is done to taste. Peel and cut apples into any kind of shape, but keep the same size for even cooking. Add apples to a saucepan. Sprinkle with brown sugar. Start with 1/4 cup and adjust as needed. Add about 1/2 apple juice or cider and the juice of half a lemon, along with the cinnamon or pumpkin pie spice, and liqueur, if using. Orange juice can be substituted. Cook over medium heat for 15-20 minutes, or until your apples are soft and have broken down into a applesauce consistency. Stirring with a wooden spoon keeps applesauce chunky, but smooth. Just before serving, add the butter and swirl into the applesauce. Serve warm.

An apple a day keeps the doctor away. You can’t compare apples and oranges. An apple is to blame for mankind’s fall from grace.

Apples figure large in our lore and daily language. And it seems that from the time a child can eat solid food, apples are important in the diet. When McDonald’s got pressure to offer a fruit option on the menu, it was apple slices.

We say “as American as apple pie.” Even Henry David Thoreau noted, “It is remarkable how closely the history of the Apple-tree is connected with that of man.”

Apples don’t just taste good. Research shows there’s something to that apple-a-day advice. Apples can help regulate blood sugar by preventing spikes. Eating an apple 15 minutes before a meal can reduce you total caloric intake of that meal. A website, wwww.whfoods.com is full of information about what good apples do, including maintaining the good bacteria in your gut. Prevention magazine says tart, hard apples are a good tool in a healthy diet. The key to getting the most out of an apple is to eat the peel, which is full of fiber.

North Carolina ranks seventh in the nation in apple production, with most being sold to production, like applesauce, and juice markets. The top varieties grown are Rome, Golden Delicious, Red Delicious and Gala. Other popular varieties grown in the state include Fuji, Gold Rush, Honeycrisp, Jonagold and Pink Lady.

North Carolina likes apples so much, there are three festivals to celebrate the fruit. The N.C. Apple Festival in Henderson is always Labor Day weekend, and has been going on for 60 years. The Brushy Mountain Apple Festival in North Wilkesboro is in its 37th year. Taylorsville, whose mountains feature numerous orchards, celebrates its festival the third Saturday in October.

The Orchard at Altapass on the Blue Ridge Parkway is a very popular stop once apple season is here. The orchard, near Spruce Pine and Little Switzerland, has fruit, apple desserts, mountain items and fun for children.

To put variety in your apple diet, try some new ones this year. For tart and juicy, taste Arkansas Blacks, Magna Bonum or Virginia Beauty. For cooking, Rome and Stayman/Winesap are standbys. For snaking, or salads, try Fuji, Gala or the extremely poplar Honeycrisp. Honeycrisp is a versatile apple, juicy and not too sweet, great for satisfying the 3 p.m. hungries, but also cooked into apple sauce or apple pie. They hold their shape fairly well.

Here are some apple facts and tips:

• Apples are produced in four areas of the state around the Henderson, Haywood, Wilkes and Cleveland areas.

• Apples are rich in pectin. Pectin and mild acids found in apples help fight body toxins, aid digestion and pep up the whole system. Pectin, too, has been associated with helping to keep cholesterol levels in balance and is significant in helping to reduce the incidence of certain types of heart disease.

• Apples are “Nature’s Toothbrush.” The mild fibrous texture of the apple, its non-adherent nature, juice content and mouth watering appeal to accelerate salivary action all combine to make it a wonderful natural aid for cleansing teeth.

• The mild nature and low acidic content of apples are more readily accepted and digested by infants, and causes less colic and rash-related disorders.

• Best way to store apples at home — always refrigerate your apples as cold as possible without freezing. Apples will ripen and therefore turn soft 10 times faster at room temperature and nearly 5 times faster at 40 degrees F.

• What makes apples turn red? The cool nights of late August and early September trigger the change in the enzymes of the apple skin to change the color from green to red. This same condition will put a pink “blush” on green Granny Smiths and add the yellow color to Golden Delicious apples.

• What is the nutritional value of apples? An apple’s primary nutritional benefit is in the pectin and fiber. Apples contain as much fiber as a whole bowl of most popular cereals. Other important natural chemicals called flovonoids may play a role in prevention of certain cancers and heart disease.

For everything you want to know about North Carolina apples, including recipes, check out http://www.ncagr.gov/markets/commodit/horticul/apples/index.htm

Chili while you work

By J.M. Hirsch AP Food Editor Slow cookers have legions of fans. I am not among them. It’s partly philosophical,... read more