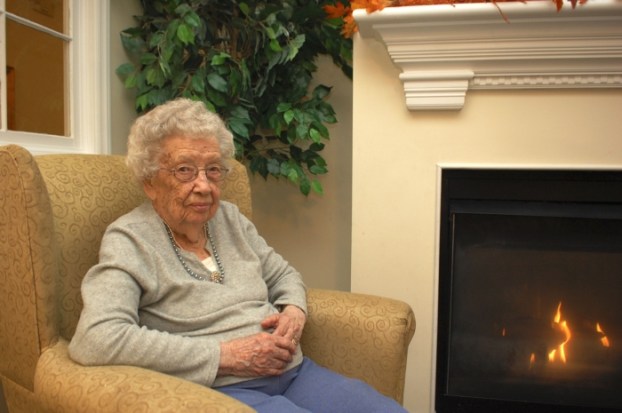 SALISBURY — From her chair, Pauline Garver Brady went through her morning exercises.

She tapped her toes, swung her arms, lifted her legs, rolled her ankles and shuffled forward and back.

“Feel the beat,” the recorded voice instructed over the music.

At Carillon Assisted Living, where Brady has lived since 2007, staff and residents know her as “Miss Pauline.” Celebrating her 100th birthday today, Brady regularly attends morning devotions and exercises. She likes to bowl, using the center’s Wii gaming console. She also plays bingo and participates in arts and crafts.

On television, she enjoys watching game shows and Lawrence Welk on Saturdays.

Brady is reserved, never making a fuss, so she had mixed emotions heading into Sunday’s big birthday for her at Mount Moriah Lutheran  Church, where she has been a member all her life. Some 90 people attended, including nieces, nephews and cousins she hadn’t seen in years.

“I’m kind of looking forward to it,” Brady said last Thursday before the party, “and in a way, I’m dreading it.”

Pauline relocated to Carillon not long after Robert Brady, her husband of 64 years, died at age 95. Until then, she had lived all of her life along a stretch of Kimball Road in Landis, not far from today’s South Rowan High School.

Within the ranks of her family, she is a legendary seamstress, cook and provider. Maybe even part angel. The extra cash she saved from making dresses helped put her three sons through college.

When she was younger and not yet married, Pauline and her older sister squirreled money they made from their jobs in a cotton mill into a cigar box and later gave it to their father to pay off a mortgage on the family farm.

When the boys were growing up, Pauline and Robert worked a second shift, from 4 p.m. to midnight, at Amazon Mill in Thomasville, not getting home until about 1 in the morning.

But she always fixed her boys breakfast and got them ready for school, middle son James Brady said. He also bragged there was nothing like his mother’s made-from-scratch yeast rolls every Saturday morning.

Pauline said she lives by a simple motto: “Be content with what you have and trust the Lord for what you need.”

Pauline Garver Brady was the second oldest of 13 children born to Robert Lee and Myrtle Garver. They lived on a farm — Robert Garver eventually assembled more than 100 acres off Kimball Road — and the children became, of course, farm hands.

Besides participating in all the other chores, Pauline picked cotton. Her father sometimes offered her a $1 bonus if she could pick 100 pounds in a day.

Pauline did well in school. In her graduating class of 18 students at the old Landis School, Brady was valedictorian. She said she learned to cook and sew at an early age, helped by two years of home economics classes.

As for sewing, she first started making dresses for dolls. After she was married, she could take Robert’s old overalls and make overalls for her sons. The first dress she made was for a sister-in-law. She charged her $1.

As the years went by, Pauline’s price per dress increased to $3, then $6, then $7. Pauline said she eventually was fixing and making dresses for about 100 women throughout southern Rowan and into Salisbury and Kannapolis.

James Brady recalled a time his mother made an evening gown for the wife of state Rep. Dwight Quinn of Kannapolis. Quinn’s wife wanted something to wear for the Governor’s Ball, and she brought Pauline a photograph of the kind of dress she wanted. That was all Pauline needed.

“She would sew those dresses up through the night,” James Brady said, “and she was very patient for the people she sewed for.”

Pauline and Robert did not marry until June 4, 1942, when she was 27 and he was 31. They had Allen, Jim and Verne, all of whom are retired today. Their union also led to five grandchildren, seven great-grandchildren and a great-great grandchild.

As each of his children married, Pauline’s father would offer to deed to them an acre of his land off Kimball Road on which to build a home. Many of the children, including Pauline, took him up on the offer.

Pauline laughed when asked how she and Robert met. It was the blindest of dates.

A brother-in-law, working with Robert Lee Brady in a cotton mill, showed Robert photographs of two of his sisters-in-law who weren’t married.

“I kind of like the looks of that smaller one,” Robert said, not knowing that the “smaller one” was Pauline.

But Robert didn’t call on Pauline Garver right away. He dictated a letter to his sister, who wrote the words down and sent the letter over to the Garver house.

“Well, I wasn’t too impressed,” Pauline said of her first impressions. The couple gradually became devoted to each other.

Besides his mother’s yeast rolls, James Brady said his mouth waters thinking of her pinto beans, pecan pies, tomato soup, cakes and “stickies,” which were made from leftover dough.

Pauline canned a lot of vegetables from the garden and picked pint after pint of blackberries for her pies. When the family slaughtered a hog, Pauline made sausage and sealed it up in giant jars.

For Boy Scout campouts, the troop always asked the Brady boys to bring the sausage, because it was that good.

“Back then,” Pauline said of how folks got by, “it was mostly farming or working in the cotton mill.”

Her sons ended that cycle. Allen, who was N.C. State University’s first computer programmer, retired as assistant director of admissions at the school. James logged 43 years in claims with All State Insurance. Verne is retired from the state’s juvenile justice department.

Pauline doesn’t hold the record for longevity in her family — yet. She had an aunt on her mother’s side who lived to be 101. Four aunts on her father’s side lived into their 90s.

Pauline has two sisters, two brothers-in-law and two sisters-in-law still surviving. A sister-in-law, Hazel Garver, is a resident with her at Carillon.

As for sewing. Pauline expressed some frustration at how difficult it is these days to see well enough to thread a needle.

“I work and work before I get the thread in,” she said.

Sometimes you just have to trust the Lord for what you need.