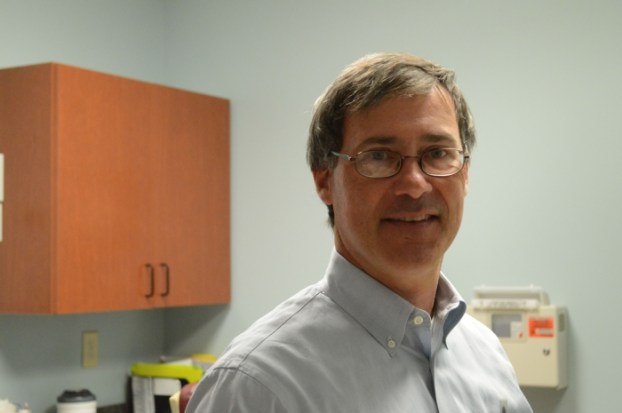 Josh Bergeron / Salisbury Post - Dr. Robert Whitaker is the only doctor in Salisbury that performs balloon sinuplasty in his office. The procedure is a relatively new alternative to traditional methods of sinus surgery.

One Salisbury physician is taking a one-of-a-kind approach to a common health problem.

Dr. Robert Whitaker, the lead physician at Pinnacle Ear, Nose, Throat and Allergy, is the only doctor in Salisbury that is using an in-office procedure to solve sinusitis, which commonly causes facial pain, nasal blockage, headaches and congestion.

Sinusitis isn’t a new problem, as it affects an estimated 37 million Americans, according to a news release from Novant Health. Whitaker’s approach, however, is a new solution to a common problem.

The procedure involves a small rod-like object with a camera and miniscule balloon. Whitaker said balloon sinuplasty involves inflating the balloon and subsequently reopening narrow sinus cavities. He said about 30 percent to 40 percent of the general population that comes into his office have sinusitis. However, balloon sinuplasty isn’t the solution for all of them, he said.

“The balloon sinus surgery is not for everyone, obviously. Some people may have polyps or need their sinuses radically opened up,” Whitaker said. “But then, there are people that have a small amount of sinusitis and maybe have lots of headaches and sinus pressure. We used to tell people just to use steroid sprays. We didn’t really think they needed sinus surgery.”

Whitaker described the introduction of balloon sinuplasty as the second-biggest innovation in sinus procedures.

“One of the issues is that traditional sinus surgery is a little more destructive as far as removing tissue,” he said. “(Balloon sinuplasty) has decreased pain, decreased bleeding and fairly quick recovery time. Cost is also a factor. Usually they can return to work the next day or leave on their own and drive home.”

Registered nurse Patricia Free is one of the multiple Rowan County residents who has undergone the procedure. Before going through the operation, Free had mostly just used medication as the solution to pain.

Free said she was unaware of balloon sinuplasty when it was first recommended as an option, but has seen positive results since the operation.

“I had a lot of pressure and had daily headaches,” she said. “I would say I’m at least 80 percent better. The headaches are not nearly as severe and I don’t wake up with a headache.”

Other than a little numbness from anesthesia, Free said she only noticed a small cracking sound as the balloon inflated.

“The insurance companies didn’t necessarily embrace it initially and saw it as experimental,” Whitaker said. “As more and more procedures have been done successfully, it’s sort of been accepted as a standard practice. This is just one more part of our arsenal to combat sinusitis.”

A couple in west Rowan County left the hustle and bustle of city life to start their own business on... read more