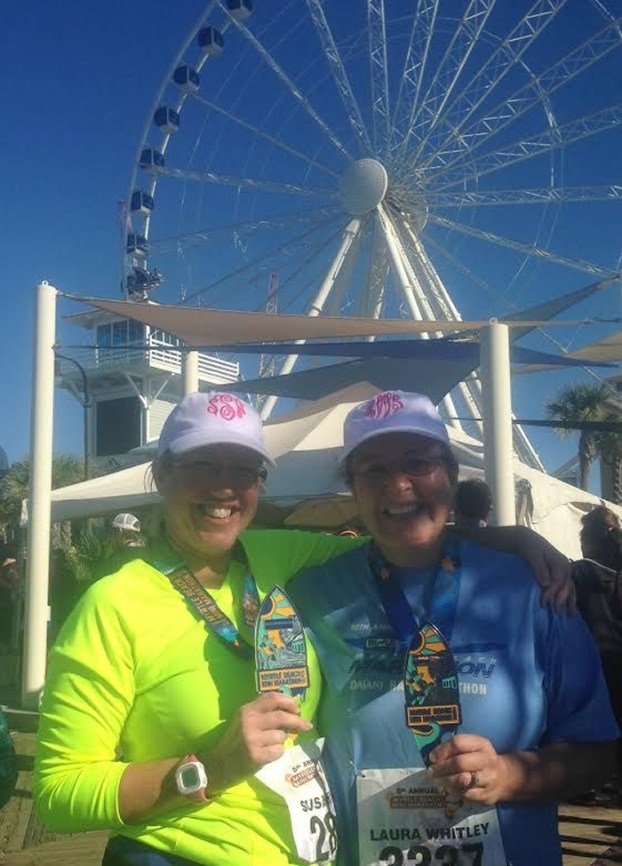 A run to remember: Conquering the Myrtle Beach Mini Marathon

When last you heard from my friend Laura and me, we had just completed the Cooper River Bridge Run, a 10K race held each spring in Charleston. It was a beautiful day. We were sitting at Poe’s Tavern on Sullivan’s Island, about to dig into the most delicious cheeseburgers in the world.

We may have quaffed a beer or two. This 6.2-mile race had been a good run, we agreed. We felt pretty good. Why not try a half-marathon next?

This sounds like a good story, but it’s not exactly the way it happened.

When I checked my notes, we had actually made the half-marathon pact standing in the Tervis store in downtown Charleston. We bought Tervis tumblers with 13.1 patches on them.

We started our training in May. My good friend-slash-running coach David Freeze told me that was really way too early, but Laura and I were gung ho. So off we went — me in Salisbury, Laura in Mount Pleasant, S.C.

We followed a training schedule — um, more or less — that David sent us. I made my editor, Scott Jenkins, start running with me.

Things were going well. Then summertime kicked in.

It got hot. Really hot. And humid. Really humid. Poor Laura. She got the brunt of the summer weather, but she persevered. She is a longtime kindergarten teacher, and summertime was actually a good time for her to train.

I can’t tell you how many mornings my GPS watch logged 70 degrees and 100 percent humidity. Yet we slogged on. To know someone was waiting for me before dawn three mornings a week helped my training.

Laura preferred to run alone. She and husband Bob have two daughters, Janey, 14, and Caroline, 10. Judging by the amount of texts and calls she received this past weekend, her family is fairly helpless without her.

“I’m never alone,” she told me during lunch Sunday. “My children get in the car with me every morning. Then they leave, and 24 students come in to my classroom. Running is the one and only thing that I do all for me.”

I should tell you at this point that if you don’t like TMI — too much information — you might better turn over to the Sports or Insight sections.

OK, I warned you.

It wasn’t all fun and games for me. I ran into — so to speak — a string of urinary tract infections that I couldn’t shake. After the fifth episode, my physicians, Dr. Jason Connelly and Dr. Jessica Blumenthal, convinced me to visit Salisbury Urology Clinic. This was not a UTI, they were convinced.

Here’s the truth: they’d actually advised that after the third episode. I was too stubborn to listen. Here’s a tip: listen to your doctors.

I ended up at Salisbury Urology on Monday, Oct. 13. If you’ve been paying attention, you will realize that was one week before the big race. Everybody I’d spoken with had raved about how wonderful the folks here were, and they were right. Dr. Bert Bertram could not have been kinder. During my appointment, he said he wanted me to meet with his nurse practitioner, Kristine Wood, so that he could gather more information before he decided what to do next.

I ended up with her on Wednesday morning, four days before the race. To say I was high-strung is putting it mildly. Here’s what I found out: You put 500 miles on those teeny, weeny muscles surrounding the bladder, and they don’t like it. Kristine recommended yoga, a change in diet and a change in medication.

I woke up the next day feeling great. I hadn’t even picked up my prescription. It was such a relief. The stress had really gotten to me.

It had not been all fun and games for Laura, either. About six weeks ago, she developed Achilles tendonitis in her right foot.

Looking back, she knows exactly when it happened — the week of Sept. 21 — because she can see where her mileage dropped off.

She completed the recommended long runs on David’s schedule and ran 28 miles the week of her birthday, Aug. 31. She and her family had gone to the beach for Labor Day.

But when she did a long run Sept. 22, “that’s when the pain became unbearable. You can feel it coming on.”

Laura iced her foot, wrapped it, elevated it when she could. She saw her podiatrist and was able to run Sunday.

“I was a little worried this morning,” she said at lunchtime. “But I took three ibuprofen before we left, and then two Tylenol at mile 8. I needed that Tylenol.”

My mother — a longtime runner — has always encouraged me to run, even though I got started too late for us to do too much running together. It’s one of my big regrets in life. Laura gets her running genes from her daddy, Raynold Stoudemayer, who died two years ago. They ran the very first Cooper River Bridge Run when she was 11.

“Now I run because Susan Shinn makes me do it,” she said.

So why’d she do the half?

“We were sitting at Poe’s,” she said. “We were feeling good … Were we drunk?”

But by the end of that meal, we were committed.

We ate more good burgers last Sunday, at River City Café on Surfside Beach. Then we headed to the closest Tervis store to buy two more tumblers, to commemorate our completion of the half-marathon.

“Now, this is a promise that you won’t make me run a marathon, right?” Laura asked me as we made our purchases.

But when we got back to the beach house later that afternoon, we found out we could get 15 percent off the 2015 Myrtle Beach Mini Marathon if we registered by midnight Sunday. Another half?

Freelance writer Susan Shinn lives in Salisbury. She plans to take a few days off before starting to train for Charleston. Maybe.