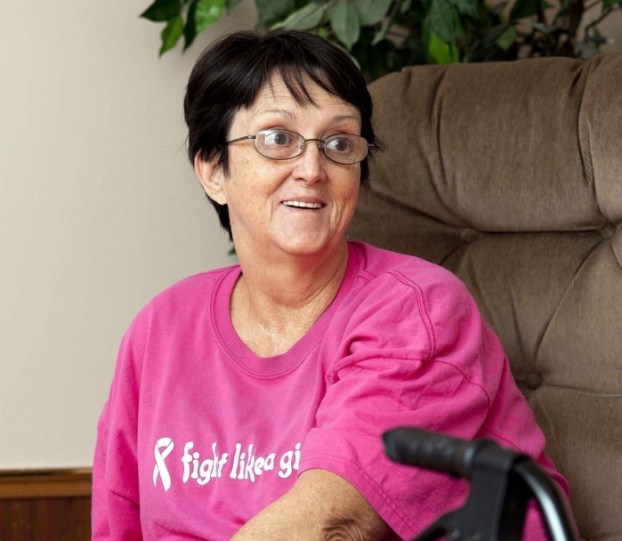 JON C. LAKEY / SALISBURY POST Kathy Smith sits in her home near Spencer on Friday morning discussing the recented added pink ribbon of hope that her family and friends made for her out of flower pots and pumpkins. Smith, who has been battling reoccuring cancer since 2010, mention that she wanted a display for her yard. Family and friends immediately jumped in painting the near 70 flower pots with cans of pink spray paint and adding mulch and lighting.

SALISBURY — Kathy Smith says she’s the No. 1 North Rowan High Cavaliers fan, the No. 1 Carolina Panthers supporter and the No. 1 redneck of all time.

Smith gives herself the redneck award for never taking down the Christmas lights on her house and in her yard. When the holiday season rolls around soon, all she’ll have to do is connect a couple of drop cords, and she’s in business.

But a different kind of decoration next to Kathy’s home on Garrick Road has cars slowing down and taking time to think of her, maybe even say a word of prayer.

Over two Saturdays, Smith’s family and friends built into the yard between Kathy’s house and that of her parents a pink ribbon fashioned from 72 upside down flower pots pressed into some fresh mulch.

Colorful pansies fill the inner part of the ribbon. Behind the ribbon are a stack of hay bales holding pumpkins painted in pink. The pumpkins have words inscribed on them such as “love,” “faith” and “hope.”

John Lee Smith, Kathy’s father, has installed a floodlight in a tree behind the ribbon, and solar lamps on each corner of the display also provide multi-colored lights at night.

Since 2010, Kathy Smith has been fighting breast cancer. That year, Smith had thyroid and breast cancer surgery. The breast cancer came back in 2012, having spread to her right hip and leading to a total hip replacement. She also had leg problems.

This August, she was walking toward her bathroom when her left hip popped.

“It sounded like a gunshot, and all I could do was start screaming,” she says.

Her “good” hip had broken in two, and she spent the next two months recuperating in The Laurels. Her stage 4 cancer seems to be spreading to other parts of her body, but she is moving better and back home taking physical therapy three times a week.

Kathy has endured three bone marrow biopsies as doctors try to determine whether the cancer they are seeing now is multiple myeloma or still the breast cancer. More chemotherapy could be in the future, and she also is preparing for radiation on her spine.

“I’m positive there’s going to be a better day,” Kathy says. “If not, the good Lord will take me where I need to go.”

Kathy Smith, 58, plans to be with her fellow classmates today when the North Rowan High Class of 1974 meets at Ellis Park for its 40th reunion.

You couldn’t keep her away. Until her recent setback with the hip, she was heavily involved in the reunion’s planning.

Likewise, Smith still attends every Friday night home football game of the 2014 North Rowan High team. You can hear one of her cowbells five miles away, Smith says.

On Sundays, you cannot pry her away from the television set when she is watching the Carolina Panthers.

Before her thyroid surgery led to frozen vocal chords, Kathy was known for her karaoke singing. She would practice on her own machine at home, then travel to karaoke nights at places such as Applebee’s, Rick’s Barbecue and Pancho Villas.

Smith preferred singing songs from the 1950s and 1960s, Back in her singing days, she also belonged to gospel groups.

If her voice ever returned, she promises she would sing the gospel standard, “What a Day That Would Be.”

Kathy Smith worked for more than 20 years at Hoechst Celanese, followed by several years as part of the intake staff at the Rowan Regional Medical Center’s emergency room.

Divorced, she has two children, Chip Wells and Christy Kinnaird, and four grandchildren.

The glorious pink ribbon in the yard was Kathy’s idea, but its execution was led by a cousin, Amy Davis.

The young cousins who did much of the work behind the pink ribbon have always called Smith “Aunt Kathy,” because of the age difference between them. Most of the women cousins are in their 20s and 30s.

When the young women should have been out having fun on their Saturdays, Smith says, they were building that ribbon.

Terri Koontz led the forces painting the pink pumpkins. When it was all said and done, many people contributed to the project, and Smith cherishes each one.

As she continues her fight, Kathy says she depends heavily on her parents, John Lee and Dollie Smith, and folks such as Davis, Francesca Foster, Hollie Sheets and daughter Christy, to get her to places she needs to go, including all the doctor visits.

Davis and Kinnaird are planning some kind of fundraiser for Smith Nov. 15, but “they haven’t told me all they’re going to do,” Kathy says. Rumor has it that Jimmy Smith, her brother, will be cooking some of his good barbecue.

Family and friends already have helped her out with things such as a wheelchair, walker and even a remodeled bathroom, which makes it easier for Kathy to take a shower.

Joe Sims at Ivan’s restaurant has stopped by with ribs, and not a day goes by when she’s not having visitors at the house, Kathy says.

Despite the roller-coaster days, they almost always find a woman in high spirits.

“I’m still going to fight,” the No. 1 redneck says. “There’s nothing that’s going to get me down.”

SALISBURY — The Benham brothers — twins David and Jason — know about controversy, but there wasn’t much controversial about... read more