Reid, Spiders too much for Falcons to handle 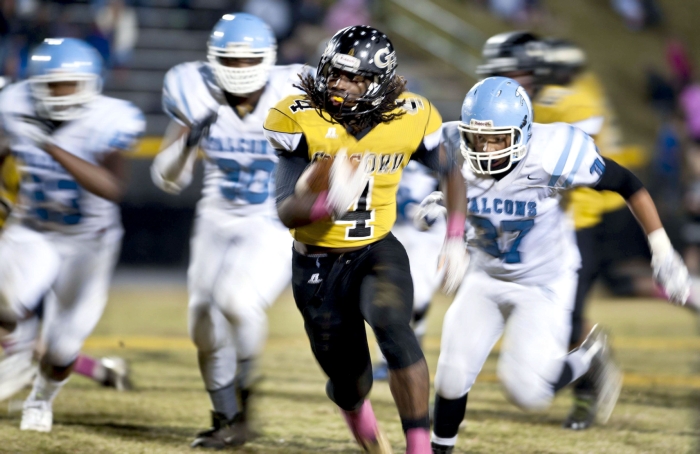 CONCORD — West Rowan’s outing at Concord’s Bailey Stadium  began with a basic sweep  right by Harrison Baucom — for a tone-setting loss of 4 yards.

The first half  of the Falcons’ 32-6 loss to Concord was rough   enough  for the visitors that West Rowan fans roared when the Falcons battled for a 2-yard gain.

“It was just kind of a struggle,”  Baucom said. “Our offensive line played hard, they fought, but Concord’s defensive line was bringing it every single play. Those guys were unbelievable.”

At one point  late in the first half, Baucom, the heart of West Rowan’s offense had 13 carries for a measly 8  yards. At halftime, the Falcons had a net of 4 rushing yards, three first downs and 13 passing yards. That won’t get it done against the No. 4 team in 3A.

“We talked all  week about how we had to come here and establish the run,” West Rowan coach Scott Young said. “If we could’ve  got the running game going,  that would’ve opened things in the passing game, but they just beat us up front.”

On the other side of the ball,  the Falcons’ defense played tougher than the score looks. Concord’s Tennessee-bound  phenom Rocky Reid had 171 yards by halftime, but 136 of those yards came on three carries. On most of Reid’s first-half attempts, he was either stuffed for a minimal gain or thrown for a loss.

“Hats off to those guys — I thought they played great,” Baucom said. “But the problem with playing against Rocky is that if one guy doesn’t wrap up, he’s gone.”

Reid was nearly gone on Concord’s first snap, a 63-yard sprint  that ended with a horsecollar tackle by Lewis and a penalty tacked on  to the West Rowan 4. On the Spiders’ next snap, Reid found the end zone.

Concord’s female kicker Marisa James  booted a 32-yard field goal to put the Falcons down 10-0, and it should’ve been 10-0 at halftime.

It wasn’t. Forced to punt from  their 16 with 1:03 to go in the half, the Falcons handed Concord’s 290-pound lineman Dez Scott a safety with a bad snap.

On West Rowan’s free kick, Carter Mazingo returned the ball past midfield, and then Reid broke a 43-yarder inside the West Rowan 5. When Keenan Black flipped a TD pass to wide-open tight end Drew Yoos, it was 18-0 at the break instead of 10-0. That was a backbreaker.

“That minute at the end of the first half changed everything,” Young said.

It was pretty much settled when Concord’s backup running back Avery Williams got loose for a 55-yard scamper late in the third quarter to make it 25-0.

“Our defense made some stops,” Young said. “But they big-played us.”

Reid’s 39-yard scoring run late in the third quarter gave him a 220-yard night and he was able to get  some rest.

The only suspense after the lengthy scoring runs by Williams and Reid was whether or not the Falcons would be shut out for the first time since 2002.

West Rowan scored for the 164th consecutive game when QB Kacey Otto bulled into the end zone from the 4 —  along with several of his offensive linemen — with 5:15 left to play.

West Rowan jayvees finished things up against Concord reserves. Martavio Rankin nearly scored a late touchdown after a nice drive directed by Bryant Young, but he fumbled into the end zone for a touchback.

Concord (9-0, 7-0) stayed unbeaten and got a whale of a game from defensive standout Mike Baker.  West Rowan (6-3, 4-2) played better in most respects than it did in a lopsided loss to East Rowan the previous week.