Raiders run over by Ragin’ Bulls 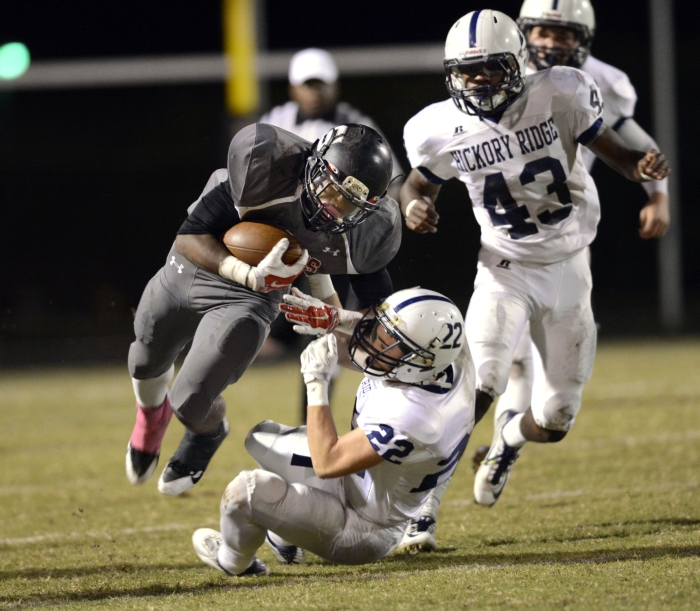 The Raiders racked up 360 total yards — including a season-best 218 on the ground — but backed themselves into a corner with their fifth straight loss.

“We have to win these last two games to make the (state) playoffs,” coach Jason Rollins said after South (2-7, 1-6 SPC) solidified its grip on eighth place in the league standings. “That’s been our goal all season. I told them, ‘Every game we play is a playoff game.’”

South was paced by senior fullback Alex Parham, who rushed for 98 yards in the third quarter and gave the tranquil crowd a charge. Sophomore teammate Jamorya Cousin bumped and bruised his way for 78 yards on 18 carries while quarterback Aaron Kennerly returned from a shoulder injury and passed for 142 yards.

“We did things a little bit differently on offense,” Kennerly said. “We repped some different stuff and moved the football. We’ve just got to finish plays and put it in the end zone.”

“Our kids stayed focused throughout the practice week and brought that intensity into tonight’s game,” said winning coach Marty Paxton. “I’m sure our tempo gave them trouble.”

It must have. Hickory Ridge took the opening kickoff and quickly marched 80 yards on 11 plays for its first TD before the game was four-minutes old. South answered on it first possession when running back Eric Stowe took a handoff and muscled for 10 yards before fumbling the ball into the end zone. Teammate Heath Barringer pounced on it to tie the score.

“That was a good hustle play by Heath,” said Kennerly. “He got to the end zone and found the ball.”

HR led 13-7 midway through the second quarter when the game’s most critical play unfolded. From his own 44-yard line, South’s Marshall Long sent a punt to the 15, where it was fielded by the elusive Mullen. He broke upfield, sidestepped a couple of would-be tacklers and took off like he was on a 3-on-1 fastbreak.

“We had set up for a safe return, but it turned into 70 yards,” Mullen said. “Everybody blocked really well on that play. We haven’t had a punt return like that all year. It felt like a turning point.”

Mullen picked up devastating blocks from teammates Darius Burley, Jarel Crawford and Ethan Jones before being wrestled to the turf on the South 15.

“We should have taken him down,” South special- teamer Burke Fulcher said of Mullen. “They just set up good blocks and he’s a good athlete.  We never got to him.”

One snap later fullback Remington Peters bulldozed into the end zone for a 21-7 lead. “That’s the thing about that young man,” Paxton said. “Any time he touches the ball he’s a threat to score. Our kids had a little life in them, but he provided a real spark.”

South trailed 31-7 at halftime and was down 38-7 by the time Parham turned his second carry into a 36-yard jailbreak run up the middle.  His next attempt produced an 11-yard gain to the Hickory Ridge 28. That drive stalled when Kennerly was sacked for the third time on fourth-and-12.

“Offense has been our weakest point,” Parham said. “So we’ve been working on it all week. Tonight we showed we can move the ball.”

They can also pass it, exemplified when Kennerly lofted a too-late-to-matter 61-yard touchdown pass to Alex Helms with 1:59 remaining. “We got a good pre-snap read on their safety,” Kennerly noted. “He bit down and we just threw it over the top.”

It was a small consolation prize for the Raiders, who lose 30 seniors after the season. “We missed tackles, missed reads and took bad angles,” said Fulcher. “But I still believe, 100 percent, that  this is a playoff team.”