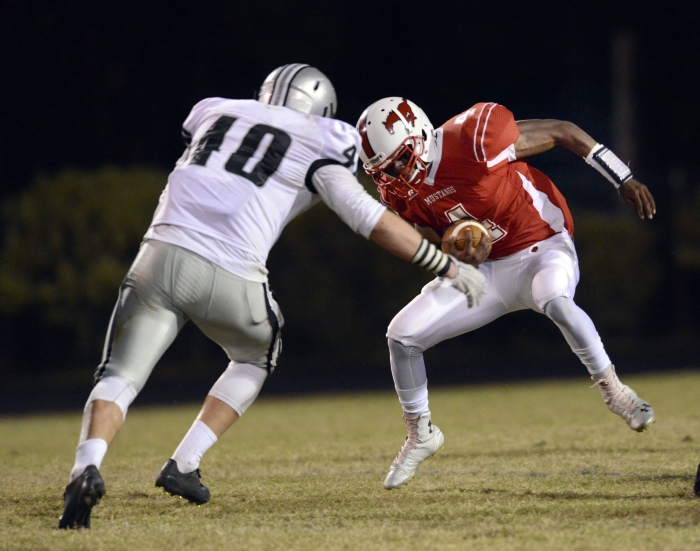 East's Tre Gilles[pie #4 tries to dance away from Ledford's Gaarrett Hooker #40. photo by Wayne Hinshaw, for the Salisbury Post

GRANITE QUARRY —  After practically scoring at will the past two games, the East Rowan Mustangs ran into a brick wall Friday night.

Ledford High came to town with a relentless ground game and   a shutdown defense to stifle the Mustangs for a key non-conference win. Not only did the Panthers (7-2)  pound out 286 time-consuming yards on the ground but they devised a defensive game plan that virtually shut down the vaunted Mustang passing game for much of the game.

East (4-5) was missing one of their key weapons as versatile running back Max Wall had to sit out the game with a concussion. The running attack was not effective as a result. The Panthers instead focused on quarterback Sam Wyrick by holding up his receivers at the line and taking away the quick slants and screens. They also applied enough pressure to take away the deep pass as well.

“We became one dimensional tonight,” East Coach Kenneth McClamrock said. “ Without Max we were limited to a degree and they were able to pin their ears back and come after our quarterback.”

“We knew coming in we would have to do all we could to keep their offense off the field,” Panther coach Chris Adams said. “We knew we couldn’t let him (Wyrick) have time back there to pick us apart.”

The Panthers grabbed a 7-0 lead in the second quarter as Ben Fox broke a 48 yarder to the two then Garrett Hooker punched it in.

It stayed that way all the way through the third quarter although Ledford missed a 42 yard field goal at the end of the first half then had a 38 yard touchdown run nullified early in the third period by a holding penalty.

Panther runner Dalton Harris proved to be their primary weapon as he carried the ball 33 times for 204 yards and two scores. His 67 yard run early in the final quarter gave Ledford a 13-0 lead.

“Dalton did a  heck of a job for us,” Adams stated, “I told him at halftime that if he kept plugging something good would happen for him and it did.”

East put itself right back in the game however by embarking on  a 11-play, 69 yard drive aided by a couple of big penalties against the Panthers. The drive was capped by a Sam Wyrick to Seth Wyrick 29 yard TD pass with 6:44 left, cutting the margin to 13-7.

East obviously needed a defensive stop to have a chance to complete the comeback but Ledford  did what they had been doing all night with their Power-I running attack.  They pounded out a 70 yard drive, all on the ground, using  all but one minute of the remaining time to ice it. Harris capped his big rushing night with a 1 yard dive to make it 19-7.

“That was the hardest running team we have faced this year,” said East linebacker Jake Boltz who was one of the team’s leading tacklers for the game. “But overall I think our defense did a good job. It just didn’t work out in the end.”

East refused to quit as Wyrick hit Wyrick over the middle for  42 yards to the eight. On the next play  Naquise Caldwell made a leaping snag of a TD pass from Wyrick to make it 19-13. But the clock showed 0:00 and the game ended without an extra point attempt.

“To come on the road and win against a very good football team is huge for our kids.” Adams said. His Panthers have a Mid Piedmont 3A showdown looming jnext week with unbeaten Southern Guilford.

The Mustangs meanwhile are still 3-3 in the South Piedmont Conference with key games against Central Cabarrus and South Rowan remaining in the season.

“We will bounce back and be ready to focus on Central Cabarrus Monday,” McClamrock said.