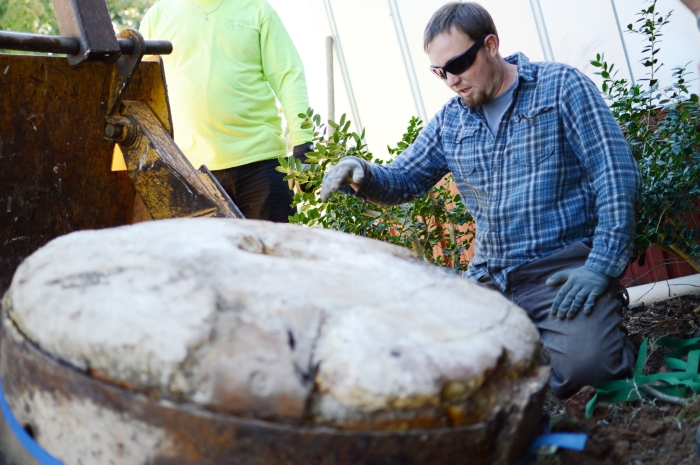 CHINA GROVE — A piece of China Grove’s early history was discovered Thursday at the roller mill.

The town’s public works department and local contractor Tony Wilson unearthed the original grindstone of the China Grove Roller Mill Thursday. Barbara Doby, Historical Society of South Rowan chairwoman, said the grindstone was originally used when the mill was located in what’s now Hannah Park. When Wilson and public works employees found it, the stone was in the back, right corner of the mill, buried under several inches of soil. When in use, the stone ground corn into cornmeal, Doby said.

“It is the one and only original stone,” Doby said. “Taking it out completes the whole package and completes the story of the China Grove Roller Mill.”

Doby said she was told of the stone’s location by former mill employee Jack Miller.

“Nobody believed me, but when we started digging there it was,” Doby joked. “People thought it was just part of the old mill and nosy Barbara got in there and dug it out.”

The grindstone was slightly cracked and crumbling, but largely intact when unearthed. A rusted metal band surrounds the stone.

To remove the stone, Wilson said the group had to remove some of the paneling on the building and dug a hole that cleared all of the building’s ductwork, which took several hours.

“The dimensions of the thing are pretty big, and I’d say it weighs about 800 pounds,” Wilson said.

Shortly after removing the stone, Wilson and town crews placed the stone near the front of the mill in an elevated position. Doby said the historical society plans to place a historical marker near the stone that lists names of people who worked at the roller mill.

Besides historical significance, Doby said the original grindstone could help in showing school children and visitors how cornmeal is made.

Unearthing the stone is the second significant step for the mill in about a month, Doby said. In September, the historical society opened up the basement of the mill to the public for the first time.

Doby said the stone is at least 100 years old, which would coincide with the mill’s opening.

For 100 years, starting in 1895, the China Grove Roller Mill was in continuous operation. It was a meeting place for the agricultural community surrounding the town of China Grove. Farmers came to sell their grain for flour and corn meal production, to purchase farm necessities and to socialize.

The historical society purchased the mill in the 1990s after raising more than $100,000 in just over five weeks.

The Roller Mill is regularly open on the second Sunday of each month from 2 p.m. to 4 p.m., but school groups also come for tours at other times.