Roaming the County: Step by step 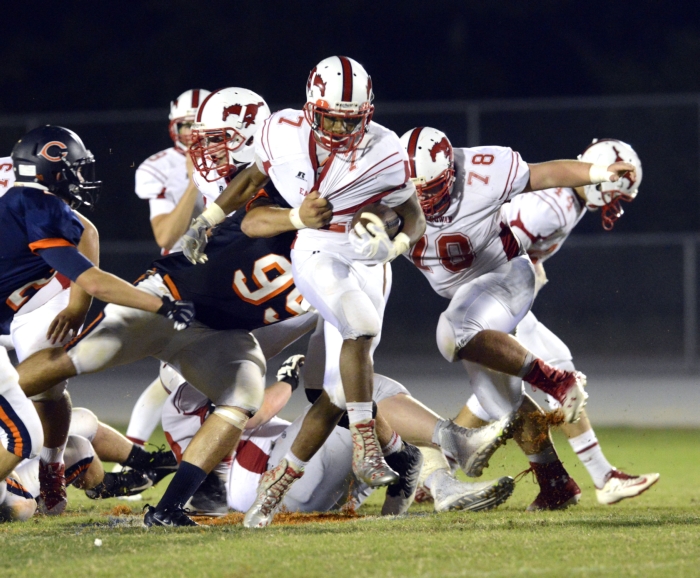 East's Max Wall #7 is pulled down by Alex Lyles #95. photo by Waynel Hinshaw, for the Salisbury Post

GRANITE QUARRY — Last week’s win in Mount Ulla was a game, and a moment, East Rowan built toward all season. Week by week. Step by step. Brick by brick.

“It was a culmination of what we felt like were three prior weeks of pretty good football,” head coach Kenneth McClamrock said. “We played pretty well against Concord. We played even better vs. Hickory Ridge and, of course, against Northwest [Cabarrus] we had a pretty good game. It was a month of hard work and our kids really getting after it, and our kids showed up to play.”

East Rowan lost 29-12 to Concord, but it outscored Northwest Cabarrus and West Rowan 109-20 in back-to-back wins.

The Mustangs put all of it together last week to come away with the 59-14 victory that few people outside of Granite Quarry saw coming. There were flashes of excitement throughout the season. East Rowan hung 54 points — the previous season high — on Salisbury in a Week 2 victory. It survived a thriller with Cox Mill a week later.

Still, none of them were like what was on display last week against the Falcons. The defense forced two three-and-out possessions and took advantage of a special teams error to force a safety. That was just in the first quarter. Everything clicked for both the offense and defense. Everything went the Mustangs’ way.

“That’s how we’ve been wanting to play for the past games, but everybody is learning how to do their key things,” defensive back Willie McRee said. “Like our coach said, ‘Everybody do your job and don’t worry about anybody else. Just do your job.’”
East Rowan’s offense in 2014 looks much different than it did in 2013. Under McClamrock, the Mustangs run a pass-heavy spread attack instead of the run-heavy veer offense. It’s a much more fun offense to run, offensive lineman Steven Ward said. The Mustangs lead Rowan County in scoring offense (37.8 points) and passing yardage (227.1 yards) per game. The scheme took getting used to, but it’s paid dividends.

“At first, everyone wasn’t really accustomed to it because we ran the ball a lot,” Ward said. “Then we got faith in the quarterback and faith in the coach, and everything was good. Everybody did what they were supposed to do.”

McClamrock said it’s a system kids want to play in whether they are a running back, quarterback or receiver.

“Immediately, those guys were excited,” he said.

The Mustangs (4-4, 3-3 SPC) sit in fourth place, a half game ahead of Central Cabarrus. This week, they have a nonconference game against Ledford (6-2, 3-1 Mid-Piedmont 3A) in which they try to avoid any sort of let down.

“All week long, we’ve been talking a lot about not letting that hangover occur,” McClamrock said. “Our kids have had good week of practice. …Hopefully, our kids will show up, they’ll be ready to play, our crowd will be rocking and our kids will come out victorious.”

There were no signs of any hangover in practice.

“It’s more serious [this week],” McRee said. “…Nobody is thinking to play around. We’re all on the same page. We want to be serious and go somewhere.”

Coupled with the two straight victories, the Mustangs are trying to make a push for the N.C. High School Athletic Association state playoffs. Given the way they’ve played the last two weeks, a 7-4 regular season is not out of the question.

“We just got to do good and keep doing what we do best,” Ward said.