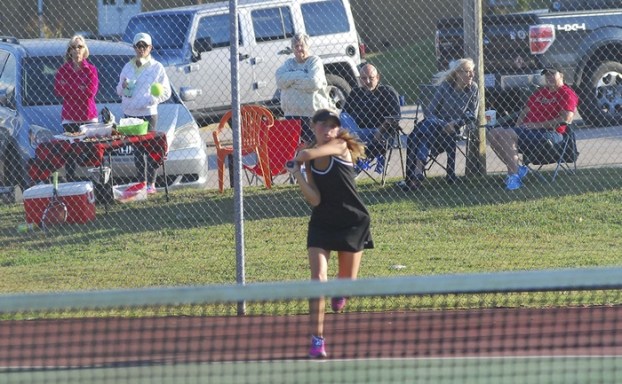 Adam Houston/The Salisbury Post Salisbury's Grace Steinman hits a shot Tuesday as the crowd behind her watches during the second set of her singles. The Hornets beat Hendersonville 6-0 in the second round of the 2A state tennis playoffs.

The Hornets hit the road to Cary on Thursday for the state singles and doubles tournament. While they’re there on business, it has a bit of a vacation feel to it.

“It does a little bit,” Kathryn Rusher said. “…But we definitely try to go to bed early and focus and keep in mind that it is important and we all want to do our best.”

The two teams squared off Saturday in the Midwest region tournament final.

“It was really crazy,” Julia Honeycutt said. “It was just mind blowing to think we would ever have to play them, but it happened last year. …So I kind of figured we would have to play each other.”

Capito and Honeycutt — a pair of freshmen — claimed a 7-6 victory in the set after winning the tiebreaker 7-4, Rusher and Steinman won the next two sets 6-1, 6-3 to claim the region title.

“It was definitely a competitive match because we both wanted to win, but we definitely both played really, really well, so we were really proud of each other for that,” Steinman said. “It was so exciting, but it was also sad to see our teammates were disappointed in themselves. We were both happy that we played so well.”

Rusher said she and Steinman expect to go “pretty far” in the tournament this weekend. Both played in last year’s singles state tournament.

Meanwhile for Honeycutt and Capito, the experience, like the entire high school season has been, is new to them. The partnership is new as well. Capito and Honeycutt were not paired together until last week’s regional tournament.

“We thought about (playing together) a little, but we didn’t really try it all just because we were just doing what everybody else was doing,” Capito said. “We didn’t really think about it at the time.”

Head coach Scott Maddox said the advantage Capito and Honeycutt have going into the tournament is knowing how to handle
pressure-packed situations because they play other sports. Honeycutt plays soccer, and Capito plays basketball and runs track.

The only time the two Salisbury doubles teams could meet during this tournament is Saturday in the tournament finals.

“I’m really excited, but I’m really nervous because I think the competition will be as hard as it’s been this year,” Capito said. “I think Julia and I will do really well. I’m just glad to spend it with my friends.”

Kayla Honeycutt made a move from the doubles to the singles tournament this season. Last weekend, she won the 2A Midwest regional tournament title. It was just a year ago she was in Cary for the state doubles tournament. She said there is not much difference in her approach regardless of which she plays in because she has played plenty of singles and doubles matches throughout the year.

“Kayla has waited her turn,” Maddox said. “Her freshman year, she played sixth. Then she worked really hard over the summer, came back last year and played two, which I think surprised everybody. Then she worked even harder this year, and she’s played one for us. …I think the sky is the limit for Kayla. I think she could win a state championship. I think she has the talent to do it.”

The Hornets are on a quest for a seventh consecutive dual-team title. Salisbury is on the road Monday at Brevard for a quarterfinal match in the 2A state dual-team playoffs. This weekend, however, is all about the individual title.

“We’re pretty much focused on individuals,” Kayla Honeycutt said. “We do know that it’s there, but I try to stay focused on what we have that weekend.”