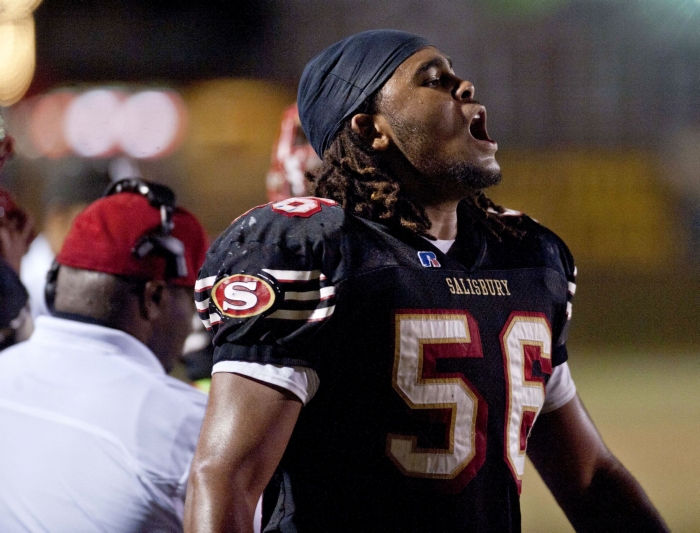 It’s a “road” Friday for Rowan County with West Rowan, Carson, North Rowan and Salisbury making short trips. Only South Rowan and East Rowan are at home. The most intriguing questions will be answered by East Rowan and West Rowan. How will those two teams respond to the unusual events that took place in Mount Ulla last week?

Can the Mustangs move past their euphoria and get ready for a good team? Will the Falcons be angry or deflated after one of their worst outings in 15 years as they take on one of the best in 3A?

Salisbury and North Rowan seek a pair of CCC victories that could bring them a step closer to a showdown on the final night of the regular season.

Reeling Davie County should get well against Parkland. Reeling A.L. Brown is likely to fall below .500 when Mallard Creek visits. The football in 4A is not for the timid.

While West Rowan played like an 0-8 team in Friday’s 59-14 loss to East Rowan, the important thing to remember is the Falcons are still in the think of the conference race. They still control their own destiny.

It’s also important to remember that either West Rowan or Concord has respresented the West in the 3A state championship game for six straight seasons, so this is a big game even without the conference implications.

A lot of coaches believe fourth-ranked Concord isn’t as strong as it was the last two years, but the Spiders just keep winning. Concord has a stout defense and a good QB in Keenan Black. Not to mention one of the state’s best players in Shrine Bowl running back, and Tennessee commit, Rocky Reid.

The Falcons contained Reid a long time and led 7-6 after three quarters when the teams met in 2013, but Reid broke loose for three fourth-quarter TDs in a 24-13 Concord victory.

The first of Scott Young’s 170 coaching wins at West Rowan came against Concord’s ultra-successful coach Glen Padgett back in 1998 when Padgett was a rookie head coach at Salisbury.

Concord had its hands full last Friday with Carson’s powerful running game but pulled out a 35-26 victory.

Concord leads the all-time series 13-4. The Falcons’ most recent win against the Spiders came in the third round of the 2011 state playoffs.

Hickory Ridge handled Northwest Cabarrus 34-6 last week, and Ragin’ Bull fans will follow the Concord-West Rowan game with interest. A West Rowan upset would create a three-way tie at the top of the SPC — unless South Rowan shocks the league and beats Hickory Ridge.

Hickory Ridge has won four straight since a 32-29 loss to Concord and demolished the Raiders 64-20 in 2013 in the first meeting of the schools. Nate Mullen, Hickory Ridge’s Shrine Bowl receiver/returner, had an 84-yard kickoff return TD in that game.

The Raiders haven’t been able to generate offense, have lost five straight and are in danger of being the only Rowan team that misses the playoffs.

It’s not a label coach Joe Pinyan wants, but Carson probably is the best 3-5 team in Rowan history.

Carson has been one play away from winning often this fall and dropped hard-fought SPC games to Central Cabarrus, West Rowan and Concord.

Carson has the county’s best rushing attack and boasts a pair of 1,000-yard rushers in Brandon Sloop and Darren Isom. Isom’s 20 TDs lead the county.

The Trojans have lost six in a row and have scored a total of 12 points in their last five outings, so it’s unlikely anything could go wrong for Carson in a must-win game.

Still, the Cougars historically have struggled with Northwest Cabarrus. The Trojans won 25-22 in 2013 and lead the all-time series 5-1. Carson’s lone win was in 2012.

This is a non-league game against a quality opponent that provides an opportunity for East Rowan to prove it’s more than a .500 team.

Ledford is the school that produced NFL fullbacks Brad Hoover and Madison Hedgecock, and it still has its share of hard-nosed athletes. Ledford is coached by Chris Adams, a name Rowan County baseball fans should recognize. Adams piloted many Ledford baseball squads against North Rowan and Salisbury in Ledford’s days as a 2A school in the CCC. The Panthers are 3A now.

One of Ledford’s losses came against unbeaten 4A North Davidson. The other was to 3A Asheboro (5-3).

East Rowan’s defense also has made strides the past two weeks. The Mustangs’ ‘D’ will have to contain Dalton Harris, who ran wild for 263 yards in Ledford’s 42-20 win against Southwestern Randolph last Friday.

Ledford blasted the Mustangs 41-14 in 2013 in the first meeting of the schools.

While Thomasville’s 7-6 loss to East Davidson last Friday wasn’t unexpected, Salisbury turned in a solid effort in a 30-20 homecoming win against Lexington.

The Hornets had 329 rushing yards, two TD passes and only one turnover a week ago, and that’s usually a recipe for victory. Willie Clark and Antwond Glenn are fine running backs and have combined for more than 1,300 yards.

Thomasville has lost to good teams, including unbeatens North Davidson and Mount Airy. The Bulldogs’ CCC win was 23-6 over West Davidson.

This has been a tremendous series with the school staging epic games since the 1960s.

The Cavaliers have won four in a row and are gathering steam as they prepare for a playoff run.

Shrine Bowl pick Jareke Chambers is 30 yards away from 1,000 rushing yards and would be the first North Rowan player to accomplish that feat three times. Chambers was awesome against East Davidson in 2013, scoring on a 99-yard run and returning a kickoff 80 yards for a score.

North Rowan’s defense forced five turnovers against East Davidson a year ago and will look for a repeat of that energetic performance,

The Cavaliers are 14-1 in conference games in coach Joe Nixon’s three seasons.

The Mavericks make their first visit to historic Memorial Stadium on Friday, and the defending 4AA state champ is a heavy favorite. A loss puts the Wonders at 4-5, a place they haven’t been in decades.

Mallard Creek lost 28-27 to Butler and was pushed hard in recent weeks by Hough and Vance, but MaxPreps still ranks the Mavericks as the state’s best team.

The Wonders are pretty good. If they were still 3A, they’d be championship contenders in the SPC. In the 4A MECKA, however, the best-case scenario is to produce another winning season.

It’s homecoming in Mocksville, and Parkland is a good choice to serve as the opponent. The Mustangs have been outscored 107-8 the past two weeks by CPC powers North Davidson and Reagan.

Davie County hasn’t won in the league and hasn’t tasted victory since it beat Thomasville on Sept. 19, but it’s hard to see anything going wrong for the War Eagles tonight.