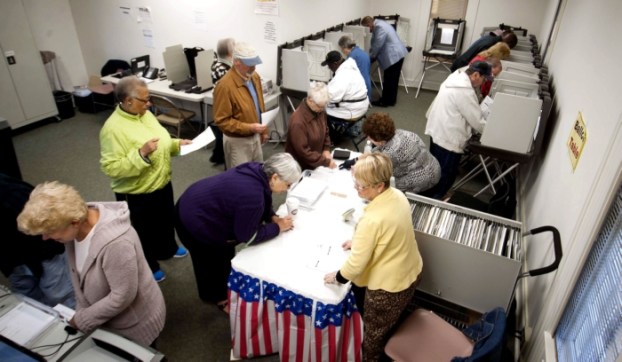 Polls busy on first day of early voting at library

Hundreds of people flocked to the library Thursday, but it wasn’t to borrow a book.

The first day of early voting for the 2014 general election was Thursday with Rowan County Public Library’s Headquarters in downtown being the only site open. Voters arrived to the polls in small groups, resulting in lengthy lines throughout the day. During lunch, the line wrapped partially around the building.

Nearly 700 people had voted by 4:30 p.m., according to Laura Russell, an elections specialist for the Rowan County board of Elections. The in-person early voting numbers add to the nearly 250 people who returned ballots by Thursday morning.

Russell said turnout on the first day was pleasantly surprising.

“It’s a pretty good number. I don’t think any of us expect 700 people on the first day,” Russell said. “We were thinking more around 500.”

“It’s hard to say because in the past there wasn’t any mass mailings of ballots,” Evans say. “In the past, (voters) would have to call and request a ballot. Now, it’s a little hard to say how the numbers compare because of how convenient it is to just get a ballot.”

When asked, some voters said they traveled to the polls Thursday because of plans to be out of town. Others were voting to avoid waiting in line on election day.

Bruce and Donna Blankinship joked that they decided to vote early because of all the negative advertisements in the U.S. Senate race.

“We just wanted to get it out of the way,” Bruce Blankinship said.

Donna Blankinship said that the problem with so many negative advertisements is voters don’t learn what candidates actually stand for, but instead what his or her opponent has done wrong.

Most voters standing in line at the library’s headquarters said they paid the greatest amount of attention to the Rowan County commissioners race, in which eight candidates are running for three open seats. Other important races, according to voters at the polls Thursday, included the U.S. Senate race between incumbent Democrat Kay Hagan and Republican challenger Thom Tillis.

“I’m a former educator, end of story,” Mary Low said about the U.S. Senate being the race she focused on most closely. “I know how important it is to have enough benefits. “I’m also concerned about the county commissioners race because I want to know that our money is being spent in the right way.”

Here is the full schedule:

SALISBURY — The Benham brothers — twins David and Jason — know about controversy, but there wasn’t much controversial about... read more