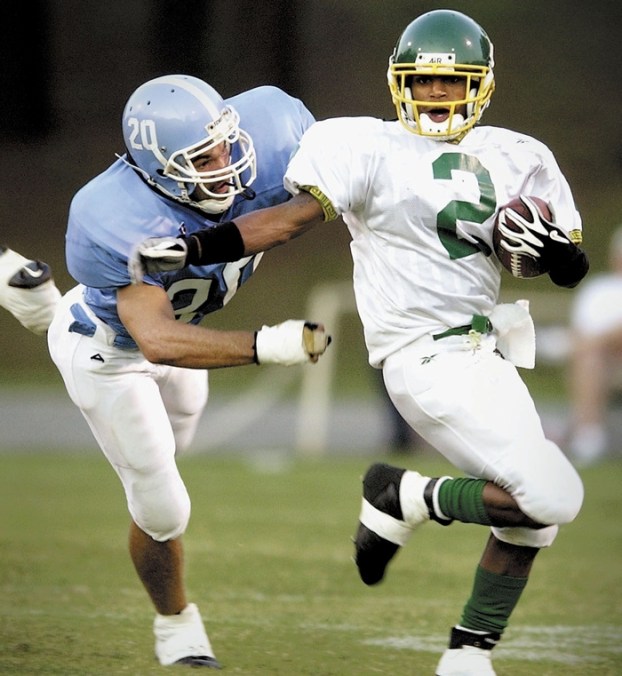 SPENCER — The final high school football game Mack Ellis played with Tony Walker was in 2002, but he remembers it like it was last week.

“We were sitting their crying like babies after we lost to Burlington Cummings in the playoffs,” Ellis said. “Because we knew that was the last football game we’d play for North Rowan.”

Walker died at 29. He was shot to death Oct. 8, along with his uncle Junior Walker.

“I got that phone call about Tony, and it just knocked me back,” said Ellis, who now lives in Durham. “It all flashed back because Tony and I were teammates a long time — back to Little League baseball at the 8th Street Ballpark, basketball at Hall Gym and YFL football.”

Ellis could tell watching Walker steal bases and beat out routine groundballs for singles in Little League that he had a chance to be a good athlete, but it was in football that Walker really stood out.

“In YFL, we ran sweep left with Tony or we ran sweep right with Travis Wilson,” Ellis said. “I think Tony scored seven touchdowns in one game.”

Walker didn’t grow a lot — he was 5-foot-8, 160 pounds as a North Rowan junior — but his speed gave him a role in the Cavaliers’ freewheeling offense. This was in 2001, the last season coach Roger Secreast operated “The Airport” in Spencer. The Cavaliers were ahead of their time — three or four wideouts spreading the field and getting open for electrifying, dual-threat QB Alfonzo Miller.

“Tony was the hitch man,” said Wilson, who was a fine defensive back for the Cavaliers. “I used to get on Tony that he was getting a whole lot of catches but not a lot of yards.”

The hitch man was the receiver who took a step or two off the line of scrimmage to get a DB moving backwards — and then stopped suddenly and turned to look for the football. Miller would get the ball to Walker, and if he could make that first tackler miss, he could turn a 2-yard pass into a 12-yard gain.

As juniors in 2001, Ellis, Wilson and Walker were part of a special team. Ledford won the CCC that season by virtue of its tenacious 17-12 win against North Rowan, but the Cavaliers won two state playoff games and finished 11-3.

“The game I remember from our junior year is when we played up at West Stokes,” said Wilson, who lives in Mooresville and works in Salisbury. “West Stokes was a long way to ride for a conference game, but Tony and I both scored our first varsity touchdowns that night. We’d been joking around for weeks about who would score first. I intercepted a pass and ran it back — my first and last touchdown. Tony caught a pass for a TD — and he had a lot more after that.”

North Rowan’s new coach in 2002 was Avery Cutshaw. The Cavs fell to 6-6 and Ledford handed them their first shutout in 10 seasons, but Walker emerged as the prime target for young QB Sakelo Lilly.

“Tony was this calm guy,” Ellis said. “Confident but not cocky. He was confident he could beat you with his feet and with his speed.”

In early-season games against West Rowan, East Rowan and Lexington, Walker caught seven balls, and it was apparent he could challenge the Rowan County reception records. He had his career game against East Rowan with 108 yards as North Rowan buried the Mustangs 41-0.

“We had a good time that year,” Ellis said. “I had a car and Tony didn’t, so he’d ride everywhere with me. He lived close to the school, so after games, we’d go over to Tony’s and hang out.

“He was a popular guy, popular on the team and in the school. The young guys looked up to him.”

Walker had eight catches in the regular-season finale against East Davidson to break the county record for receptions in a season with 63.

He added five in the playoff loss to Cummings to finish with 68.

Walker’s 63-catch regular season in 2002 is still good for a share of the county record. East Rowan’s Seth Wyrick had 63 in the 2013 regular season.

In 2009, West Rowan’s Jon Crucitti topped Walker’s 68 catches for a season counting the playoffs, when he snared 79 balls in the Falcons’ 16-game championship campaign.

Walker, who had 104 receptions, is one of just 10 players in county history to top 100 career catches and accomplished that feat in just two seasons. Walker went on to North Carolina A&T, while Ellis went to North Carolina Central.

“We didn’t see each other much, but when we did it was always like old times,” Ellis said. “Even if it had been a year, it was like we’d just seen each other yesterday.

“Guys you play with in high school, guys you go to the camps with and get through the hard workouts with, there’s a bond there and there always will be a bond.”

Walker’s teammates and his friends in North Rowan’s graduating class of 2003 won’t forget him.

“Losing Tony is hard,” Ellis said. “We didn’t win championships in football, but Tony played like he was a champion.

Wilson shares those memories and will hold on to them.

“Tony was a guy who gave everything he had for North Rowan,” he said. “Even in middle school, that’s all we talked about — playing football for the Cavaliers on Friday nights.”

The Hornets hit the road to Cary on Thursday for the state singles and doubles tournament. While they’re there on... read more