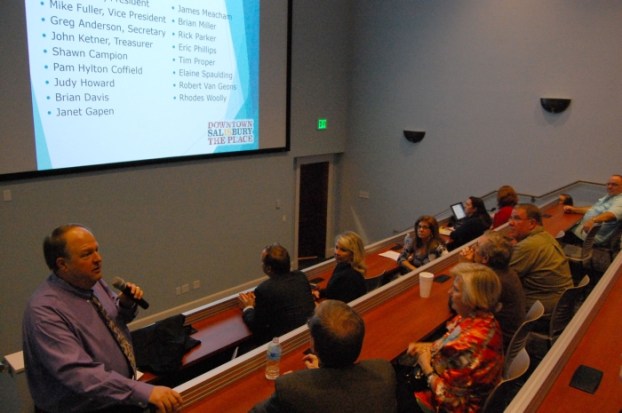 The people working to better the downtown area came together Thursday to celebrate their success and look to the future.

Downtown Salisbury Inc. held its 34th annual awards meeting at the Salisbury Business Center on South Main Street. The event honored individuals and businesses that worked to improve the downtown area throughout the year.

Downtown Salisbury Board President Mark Lewis said the event is a way to say thanks to all the people involved with the organization.

“Good recognition time for our sponsors, for our new businesses, for our old businesses; ones that have been with us for a long time,” he said.

Paula Bohland, executive director of Downtown Salisbury, said the event brings with it a sense of togetherness.

“It’s a really nice time for us to connect with people who are stakeholders in the community,” she said.

Before the awards were handed out, Lewis told the audience that since 1980 the work of Downtown Salisbury has resulted in $124 million in investments and more than 1,000 jobs.

Lewis, who was honored at the event for his work, said the average attendance at downtown events this year has been more than 1,000 people.

Lewis said this year’s First Friday Summer SIP event was so successful that next year’s event, in August, is set to be a weekend festival.

“That’s going to be, probably, one of our signature events this coming year,” he said.

The Salisbury Business Center is owned by and home to Integro Technologies. Before the awards were handed out, a reception was held in a new wing, still under construction, of the building. Once finished, the space will be leased to other businesses.

Lewis said the event was deliberately held in the new wing to show the continuing growth of downtown.

The awards for new construction/renovation went to:

• Emma’s of Salisbury for turning what was a drug house into a popular restaurant spot.

• Integro Technologies for its $3 million investment to build the Salisbury Business Center.

The leadership award went to Toby Hagmaier, and the volunteer of the year was Sue McHugh.

Outgoing board members Pete Bogle and Paul Fisher were honored for their service.