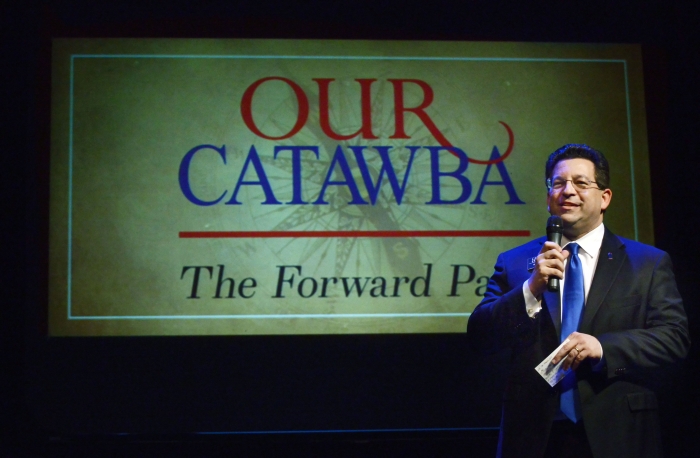 Catawba College publicly launched its $60 million fundraising campaign with an interactive presentation for alumni and supporters of the college this week.

The funds will be used for campus expansion, curriculum enrichment and scholarships.

A total of $27.6 million – nearly half of the $60 million goal — was raised prior to the public announcement. This money was received from board members, actively involved alumni and other supporters.

The college is working on a number of projects right now, which will be funded through the campaign, including study abroad programs in Germany and Japan, a substantial solar project that would create millions of dollars in savings, building a recording studio in Hoke Hall and developing a partnership with the National Sportscasters and Sportswriters Association with plans for a new building.

Lewis said now that the fundraising campaign is public, it’s time to inform alumni and Rowan-Salisbury community about Catawba College’s “goals and our aspirations.”

The college hosted “Journey of the Forward Path” to kick off the campaign by sharing Catawba’s rich history and revealing a glimpse of its proposed future.

Guests were guided through an interactive history exhibit, as the college’s theater students brought history to life by portraying influential individuals in Catawba College’s history including Judge M.L. McCorkle, who was instrumental in opening the school; Helen Foil Beard, the college’s first female graduate; Dr. Elmer R. Hoke, the president who oversaw the college’s transition to Salisbury; Florence Busby Corriher, who founded the Blue Masque dramatic society; and Gordon Kirkland, Sr., the college’s football coach in the 1940s.

For some alumni, the interactive exhibits were especially personal.

“You don’t remember me, do you?” Walter Ramseur said to the student portraying Corriher, adding, “I was your assistant for two years.”

“You look great,” she replied, with a surprised tone.

“I just met my grandfather,” he joked, after leaving the station about Hoke.

Attendees also had the opportunity to meet Sierra Bauer, a freshman from the Catawba Indian tribe; learn more about Ralph Ketner, the founder of Food Lion and Catawba supporter; and view other artifacts and memorabilia from Catawba throughout the years.

Each station showed how the college has progressed and developed over the years.

The tour ended with a map of what Catawba’s campus could look like once all the proposed projects were finished.

Randy Southard, a senior development associate for the college, called the proposed additions a “change in the campus landscape.”

“I think it’s a great kick off event for a much needed expansion campaign,” said Richard Meyer, who graduated in 1970. “I really enjoyed the historical commentary.”

Monica Farrington, assistant to the president for special events, said the event was a “wonderful opportunity” for the college to show where they came from and where they envision themselves down the road, adding, “Who doesn’t like a great party?”

Lewis added that it was a “thank you to incredibly generous people who are providing new pathways for the college and our students.”