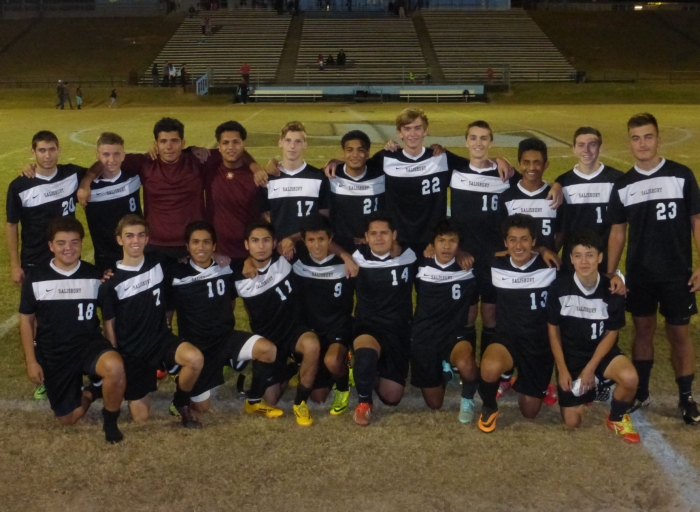 • Cox Mill won 4-1 against Central Cabarrus on Thursday to secure second place in the SPC.

• Salisbury is ranked 14th in 2A and  finished the regular season with 15 straight wins.

The Hornets (18-4) won 1-0 against Trinity on Thursday, beating a fellow conference champ.

Senior Michael Brown had the game-winning goal off an assist by Landon Goodman.

Arturo Ramirez got the shutout for the Hornets. Christian Uribe and Reilly Gokey provided stout defense in front of him.

Playoff brackets are expected to be released on Monday afternoon. The Hornets will have a first-round home game on Oct. 28 and 29.

Salisbury’s girls will travel to Brevard on Monday for a 3 p.m. match in the third round of the 2A dual team state playoffs.

Top golfers from across the state will compete next week in the NCHSAA’s 34th women’s state golf championships.

For the 12th year in a row, the NCHSAA is offering classified championships as the number of schools competing in the sport has grown, and for the fourth consecutive year there will be three different state championships.

The two-day events will be held on Monday and Tuesday at three different sites.

The 4A championship is set for Pinehurst number one, while the 3A golfers will compete at the Longleaf Golf and Country Club in Southern Pines.  The 1A-2A classification will be held at the Red Fox Course at Foxfire Resort and Golf Club in Foxfire Village.

Players and teams qualified to the state championship from regionals across the state.

Salisbury has taken top honors among 1A-2A teams in the state the last three years and has qualified a team once again.  Isabella Rusher of Salisbury won the individual crown in both 2011 and 2012 but Annika Winebarger of Elkin took top honors last year.

Raleigh Athens Drive and Charlotte Ardrey Kell have combined to win the last six state 4A team titles, with Ardrey Kell winning in both 2012 and 2013.

Ledford has captured the last three state 3A championships and has qualified to extend its title streak. Siranon Shoomee of Lee emerged from the back on the second to day to win the individual crown in 2013 and is back to defend her title.

South Rowan’s Alexandria Bare and Carson’s Micah Furr qualified as individuals at Corbin Hills  on Monday  to play in the state event.

The championships will include a field of 78 golfers in the three tournaments.

Golfers are scheduled to tee off at  9 a.m. on Monday morning.

Players will be paired differently and tee times adjusted for Tuesday’s round, based on Monday’s scores.

Salisbury rallied from a 16-6 deficit to beat Thomasville 22-16 on Thursday.

The Hornets stayed unbeaten in the CCC.

Salisbury scored a special-teams safety to get within 16-14, and took the lead on a scoring run by Cameron Horne. Tyquan Jones added a 2-point conversion. Nimley Davis had a big fumble recovery.

Victor Lyles, Shy’Kim Coney led the defense. Chris Clodfelter had a fumble recovery for a TD.

• Carson rolled 35-6 against the Northwest Cabarrus jayvees on Thursday.

Jay Wilkerson had three scoring runs for the Cougars. Wilkerson scored on runs of 24, 42 and 46 yards.

Brenden Westbrook had an interception. Isaac Bell led the team in tackles.

• West Rowan’s jayvees beat Concord 37-8 on Thursday, as Martavio Rankin rushed for 144 yards and a TD.

Oct. 25 is the last chance to register for girls basketball and Little Shooters basketball at the East Rowan YMCA.

Register at the East Rowan YMCA or online at www.rowanymca.org For more information, contact Joe Finney at 704-279-1742 or jfinney@rowanymca.org.