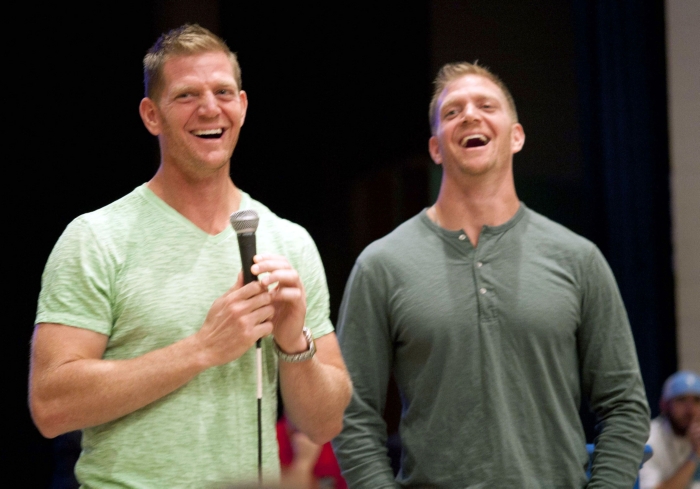 SALISBURY — The Benham brothers — twins David and Jason — know about controversy, but there wasn’t much controversial about their message to Knox Middle School sixth-graders Wednesday.

Care more about others than yourself. Make decisions today you can live with the rest of your life. Be a protector. Follow the rules. Get up early, and work hard while no one else is watching.

And the Benhams’ playful jabs at each other hit home with their young audience. “This is my twin sister, Jason,” David said in introducing his brother.

As the kids left the “Game Plan for Life” assembly Wednesday, the Benhams stood at the back doors, handing out wrist bands that said “Decisions = Destiny.”

But only a few months ago, the Benhams, who live in Concord, made national news when HGTV canceled their planned reality show, “Flip It Forward,” before the first episode ever aired. It was supposed to debut this month.

HGTV’s decision came after Right Wing Watch, a liberal watchdog group, published comments David had made in years past against gay marriage and abortion.

The 39-year-old Benhams said this spring they were saddened by HGTV’s decision but still thought there should be room on television for brothers who were faithful to their families, believed in biblical principles and were dedicated professionals.

Basically, they said, their Christian faith cost them a television show, and they were viewed by many people as victims of reverse intolerance.

“They stood for what they believe in,” said former National Football League defensive end Renaldo Wynn, another speaker in the Game Plan for Life program.

After the assembly, David Benham said a lot of good had come out of the controversy with HGTV. Ever since the cable channel’s decision to cancel the show, the brothers seemingly have been on the road, speaking at schools, political events and churches.

In Washington, D.C., in June, Faith & Freedom Coalition founder Ralph Reed presented the brothers with an award for their willingness to stand up for their religious beliefs. The Benhams have said religious freedom in this country means nothing if religious people stay quiet.

If the brothers were coming across as haters, they would not be receiving these invitations to speak, David Benham said, adding their message of standing up for your beliefs “really resonates” with their audiences, especially in a world consumed by political correctness.

“Jesus loves all people,” David Benham said. “He does not love all ideas.”

Since the HGTV cancellation, David said, a large network did reach out to the brothers about a possible show, but the brothers decided against it.

The Benhams will have a book coming out in February titled “Whatever the Cost.” They have said a person has to be willing to lose everything to speak boldly about his faith.

The Benhams neatly sidestepped most references to the Bible in their assembly program with the Knox students. Jason Benham spoke of reading the best-selling book of all time that same morning and encouraged the students to use Google to find out what that book was.

The brothers said they have eight or nine real estate companies, including Benham Real Estate Group, which they founded in 2003. Their canceled television show was designed to guide families through the process of house flipping — buying a house cheap in the right location, fixing it up and selling it for a profit.

The Benhams have been successful at house-flipping, and their show would have relied on couples in the Charlotte area. The first episode was complete, except for three hours of filming, when the show was canceled.

Joe Gibbs’ Game Plan for Life relies primarily on former athletes and others associated with sports to bring messages to students about making the right decisions and setting goals in life.

The Benhams have a sports background in that they played college and minor league baseball for a total of eight years. David was a catcher, who hit right-handed; Jason, a third baseman, who batted left-handed.

They fielded a lot of questions about baseball from the students.

Had they ever met Derek Jeter? (No.) Did they ever play against each other? (Yes. In one of those games, David beat out a bunt to third against his brother.) How many home runs did they hit? (Not many, David said.)

“The problem was,” Jason said, “he couldn’t hit a curve ball.”

David Benham encouraged the students to make footprints, or decisions, in life that last. Early on, he said, the brothers decided they would read the Bible regularly and not become involved with alcohol or drugs.

They also took their father’s advice to find the weakest kids in school and make them their friends. “We made choices,” David said.

Jason Benham said the brothers were seniors in high school when they purposely made friends with a freshman who was alone and being picked on. One day, Jason put his arm around “B.J.” in the middle of the cafeteria, guided him over to where other seniors were eating and called over the five prettiest girls in school to talk with him.

The seniors ended up chanting the freshman’s name in tribute, and “it changed his entire high school life,” Jason said.

The school assembly program has been represented a partnership among the Rowan/Kannapolis Alcoholic Beverage Control Board, law enforcement and Gibbs’ Game Plan for Life.

Speakers will be talking to students today at Woodleaf and Isenberg elementaries and at Catawba College. Former NFL star running back Clinton Portis is flying up from Miami to be at the 3 p.m. Catawba College gathering.

The Benham brothers acknowledged they were highly competitive as kids, and their father always told them competition should build people up, not tear them down.

Between them, the Benham brothers have nine children — Dave, five; Jason, four. It’s just another example, David said, of his being better than his twin.