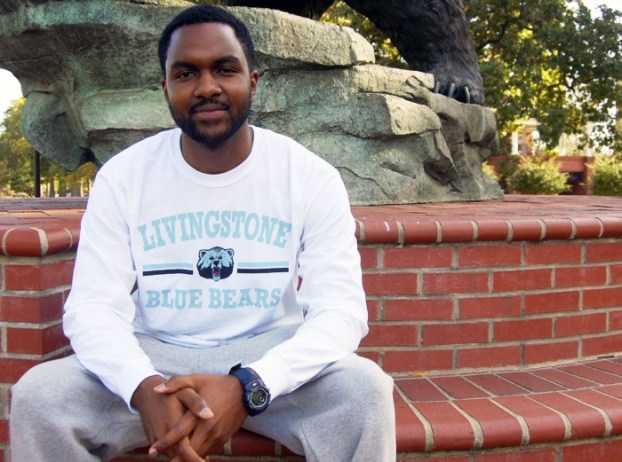 At 28, Micah Griffin already has an impressive resumé — he’s a continuous learner, doctoral student, nonprofit founder and an instructor at his alma mater, Livingstone College.

His passions are education and fitness — fitting, since he teaches fitness and wellness, a required class for all freshmen. His organization, called Heal Our People, Inc., focuses on health care equality, academic advancement and fatherhood success for minorities.

Griffin grew up in Chesapeake, Va., with his father and older brother.

“I had a strong father who instilled a lot of values,” he said.

Although his mother lived in Florida, she was still very involved in Griffin’s life.

“My mom was the one who pushed education. My dad pushed the athletics,” he said, adding that his mother always told him “education is the surest way to get what you want.”

Griffin graduated from Deep Creek High School and was recruited to play football at Livingstone College, where he majored in biology.

“I wanted to do something in the health care field,” he said, adding that he’s always had a passion for health and wellness.

“I was that kid who played Operation all the time — I took it serious,” he said.

When he graduated in December 2008, Griffin enrolled in the chiropractic program at Life University in Marietta, Ga. After several months, however, he realized he didn’t want to be a chiropractor and enrolled in the exercise physiology program and focused on rehabilitation.

He interned with the Atlanta Falcons, which rekindled an interest in physical therapy. He applied to several physical therapy programs, but wasn’t accepted due to the competitive nature of the programs.

Griffin was put on the waiting list for several schools, but decided to look into other options.

That’s when he heard about the University of Medicine and Health Sciences on Saint Kitts in the Caribbean.

After two semesters, however, Griffin realized he couldn’t afford medical school since he couldn’t use American financial aid.

“I guess I was in that phase where I had to figure it out,” he said. “I realized I wanted to do more of the administration program.”

Griffin got a job working in quality assurance with a mental health center, and began a dual program through Walden University online. When he graduates, he will have a doctorate degree in health services with a concentration in community health, as well as a master’s degree in health care administration.

Griffin said he can see all the education he’s pursued paying off, as he’s had a number of opportunities he wouldn’t have had without it. Not only has it impacted him, but it’s impacted his family.

When his mother saw him start an online graduate program, she followed suit.

“She inspired me to do it, and now it’s inspiring her,” he said.

His brother, who went straight into the military after high school, is back and is starting college for the first time.

Now that he’s teaching fitness and wellness at Livingstone, Griffin said he “probably will never leave academia, ever.”

“Doctors do educate, but that’s a small piece of what they do,” he said. “I’m really able to get to them before they have to go to the doctor.”

In his classes, Griffin is able to educate his students about how different diseases and health problems target the African American community, as well as how to take care of themselves and how to do CPR.

“That’s information they can take with them forever,” he said.

“It allows me to also act as an advisor to our students who want to go into the health care field,” he said, pointing out that he has a wide variety of experience in health care.

Not only is Griffin teaching classes, he’s also getting to work on the research and implementation of a $261,000 grant through Novant, which is targeted at fighting obesity amongst the Livingstone’s students.

“Now I’m getting the opportunity to participate in research studies,” he said. “I love it.”

Griffin’s classes and research fall closely in line with Heal Our People, Inc.

“Minority health is my biggest thing,” he said, adding that he noticed that the majority of his clients in mental health were minorities.

He also saw a difference between his own life and those who grew up in a home without a strong father.

That’s how he decided to focus his work. Since Heal Our People, Inc. received its tax-exempt status two months ago, it has hosted a luncheon for fathers with children in Head Start, organized an alumni panel of successful men to speak at Livingstone’s summer Bridge program and is planning a health fair for November.

“We are doing it from a different approach,” Griffin said, adding that he likes being hands-on.