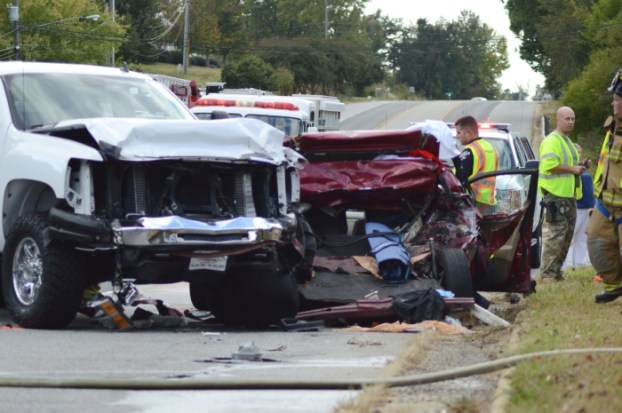 Josh Bergeron / Salisbury Post - Two people were confirmed dead and another injured after a white Chevy Silverado and brown Hona car collided near the intersection of Jake Alexander Boulevard and Ivy Street.

Two adults were confirmed dead and one person was seriously injured after a two-vehicle accident near the intersection of Jake Alexander Boulevard and Ivy Street.

The two deceased adults — who police would not fully identify until notifying the family — were in the back seat of a burgundy Honda Accord. A white Chevrolet Silverado was also involved in the accident.

Salisbury Police Officer Lt. Andy Efird said the drivers of the truck and car were able to stand and walk around following the accident.

The Honda Accord, which contained four people, was stopped on South Jake Alexander Boulevard facing Faith Road and the Chevrolet truck, with only the driver, was traveling from Morlan Park Road in the same lane hit the Honda from behind, according to the news release.

Upon investigation, police found no indication of impairment or excessive speed were involved.

The accident crushed the rear of the Honda and the truck sustained significant damage to its front end.