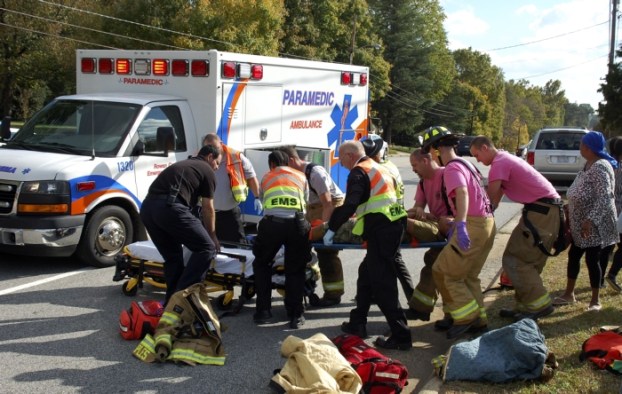 GRANITE QUARRY — An East Rowan High student, walking across North Salisbury Avenue toward his home Tuesday afternoon, was injured when he was struck by a sport utility vehicle.

Amor Wagner, 14, a freshman in high school, looked to have a fractured right leg or ankle. He was conscious and talking with rescue personnel before being loaded into a Rowan County EMS ambulance and transported to Novant Health Rowan Medical Center.

Wagner’s school bus had deposited him on the side of North Salisbury Avenue opposite from where he lives in the 700 block.

The bus proceeded on before Wagner and a friend, 16-year-old Tyrisha Gibson, began to cross the road toward Wagner’s house.

Gibson said they paused in a turn lane to look for traffic before continuing on. A Honda Pilot struck Wagner in the eastbound lane closest to the curb, Gibson said.

“He just came out of nowhere, honestly,” Gibson said.

Gibson, who was not injured, said the impact with the SUV sent Wagner into the air a little bit. He pulled himself into the yard in front of his house, she added.

Police were questioning the male driver of the SUV at the scene Tuesday. Granite Quarry Police are investigating.

The accident slowed U.S. 52 traffic through Granite Quarry for about a half-hour.

In this area, North Salisbury Avenue is four lanes. Two lanes going toward Granite Quarry are narrowing into a single lane. On the other side, there’s a turn lane and a through lane toward Salisbury.

SALISBURY — If you’ve ever taken a tour of the Dr. Josephus W. Hall House, it was probably easy to... read more