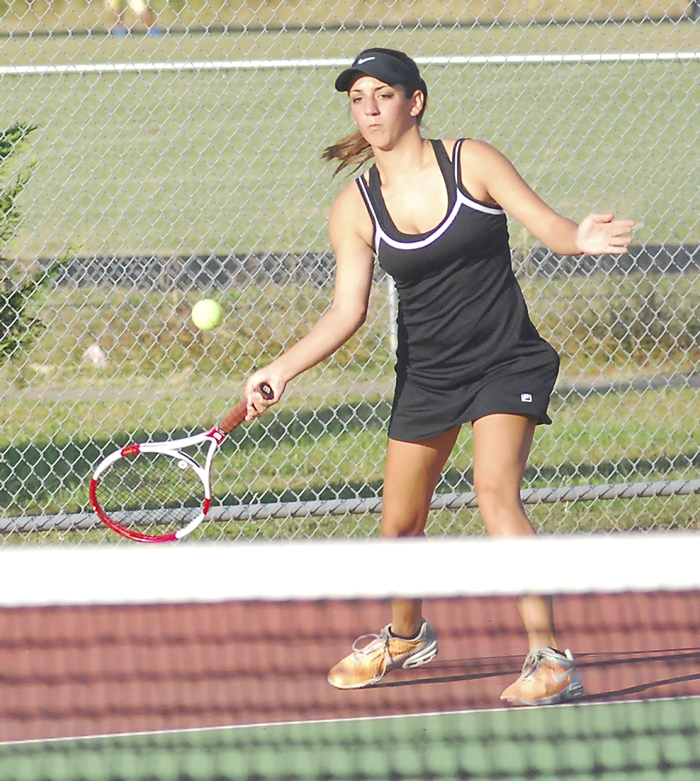 Adam Houston/The Salisbury Post Salisbury's Emily Capito hits a shot Tuesday in the Hornets' match against Hendersonville in the second round of the 2A state tennis playoffs. The Hornets won 6-0.

Salisbury took care of business Tuesday against Hendersonville in the second round of the N.C. High School Athletic Association 2A state playoffs. The Hornets needed only 41 minutes to clinch the win. Emily Capito, playing No. 5 singles, was the last one to finish her match. She beat Annabell Webb 6-3, 6-0 in less than an hour.

Salisbury defeated Hendersonville 6-0 to advance to the quarterfinals of the 2A state dual-team playoffs.

“It was good to get this one under our belt,” head coach Scott Maddox said. “You don’t want to take anyone for granted. You don’t know about teams coming from far away; who they played, what kind of competition they’ve played. They had some girls that played pretty well, but I thought our girls came out focused and ready.”

It was a continuation of last week’s win in the first round against Franklin and the 2A Midwest regional tournament.

Salisbury’s tandem of Rusher and Steinman defeated teammates Julia Honeycutt and Maria Capito on Saturday in the regional tournament final. Kayla Honeycutt claimed the singles title. All five will be in Cary this weekend competing in the state singles and doubles tournament.

After this weekend and last week’s first-round match against Franklin, the Hornets took to the court to improve a few things. It showed.

“We worked on our serves, and some of that was a result of the regionals,” Maddox said. “We were double faulting too much. We worked on our volleys a little bit, on putting our volleys away so that they couldn’t be played. And we just played. You just get out and get it done on the court playing.”

Tuesday was the last time Salisbury tennis will be at home in the 2A dual-team playoffs. The Hornets (15-2) face Brevard (16-2) on Monday in the quarterfinals.